Answer: What's the significance of where I'm standing?

I have to say that I'm tempted to just pose questions from now on, and let the discussion just roll on forward.  The SRS team is getting to be very, very good! 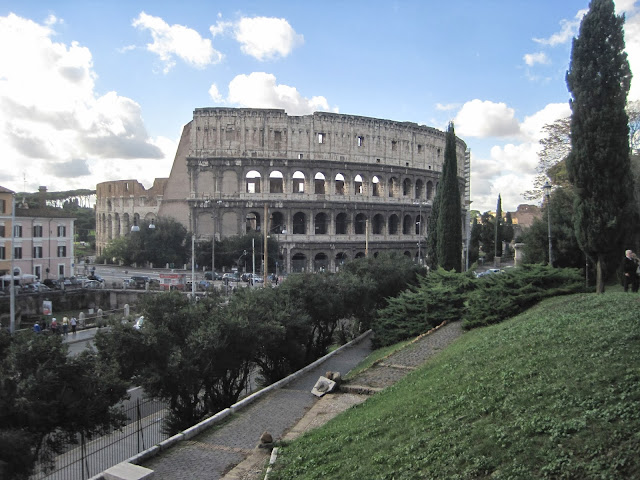 And the questions were:

1. I'm standing on a pathway that's named for the building that was once the glory of this hill.  What's the name of that building?


You might, if you're lucky, recognize this as the Colosseum.  (Which is, as it turns out, a misnomer--the name "Colosseum" comes from the name of a giant statue, a colossus, that stood nearby.  People, being people, started calling that whole area, "the Colosseum.")

But let's suppose you don't immediately recognize it.  Then what?

If you try to search-by-image with this, it doesn't work.  Why not?  Too much noisy stuff in the periphery--the trees, the hill, the streets, the pathways.

So here's a strategy to try when you're stuck like this:  use a distinctive subsample of the whole image.

Here's what I did.  I just cropped out this much of the original, some part of the entire image that I thought many other people would photograph as well: 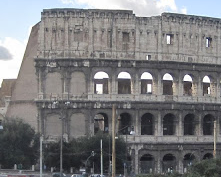 And then did a search-by-image for that.  Look what I find.  No obvious and direct answers, but a bunch of sites that have very similar images.

If you do 10 seconds of clicking around on those hits, you'll figure out that it's the colosseum straight away.

Now we know this is the colosseum.  (And a few seconds of doing image search on the term "Colosseum" will verify this.) WHERE am I standing?

If you do a Google Maps search and switch into Satellite mode (and have WebGL turned on), it basically starts running Google Earth for you.

Then, search for Colosseum, and you'll get something that looks like this: 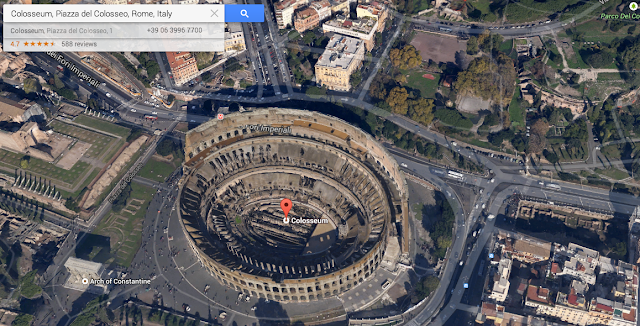 Just look at this 3D projection for a second and you can tell that I must be standing somewhere over on the right-side of the picture.  Then, by using the 3D controls, I can line things up to try and more-or-less reproduce the picture from above--this time, just by using Google Maps. 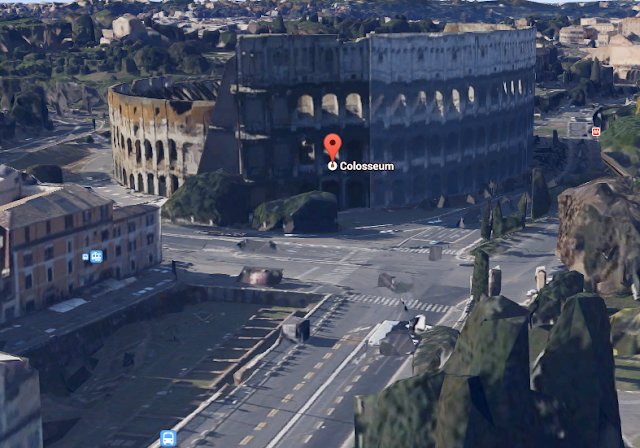 It's not exact, but pretty close.  (The trees are all 3D modeled as well; they're quite as precise as you might like.)  Keep reminding yourself... this is NOT a photograph--this is a 3D reconstruction.  You still need to validate this location!

In any case, you can now switch back to regular Map view and see what the name of that street is.  You can even double-check by using the Streetview pegman (the yellow stick figure you can drag around to get Streetview images) and getting as close as possible. 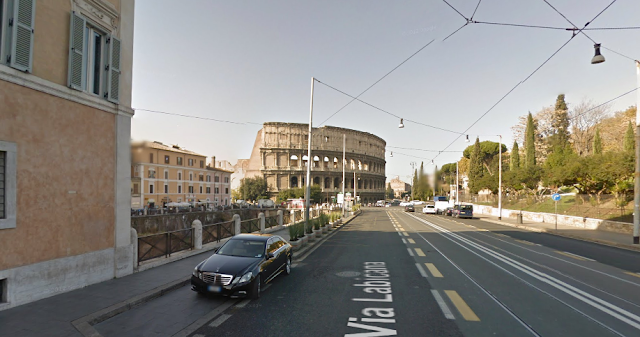 Looking at the map, it's pretty clear that I was walking on the path labeled Viale della Domus Aurea. A quick search for

shows us that this was the name of the fabulous house/villa/estate that the Roman Emporer Nero built on the site.

As our incredible SRS readers found out, the Domus Aurea ("Golden House") was a huge place that covered most of the hillside where I was walking.

After Nero died (by suicide in 68 AD), the place was more or less demolished and repurposed for other reasons.  It's worth noting that the Colosseum we know was NOT there when Nero was alive.  In his day, that area was kind of a swampy marsh that he converted into a lake for his landscaping. Since Nero was massively embarrassing to the senate and people of Rome, on the site of Nero's lake, Vespasian built most of the Flavian Amphitheatre (now known as the Colosseum), which could be flooded to stage naval battles.  He left the statue, the Colossus Neronis at the side.  In short order Trajan built an equally large bath complex on the site.  Forty years after construction, the Domus Aurea, was history, buried and preserved.

As it turns out, I visited the Domus in 2005 on my last trip to Rome.  Alas, the place was quickly deteriorating even then, and it wasn't long until the authorities closed up the site, pending reconstruction.

It's not a great photo, but it's about as good as others I've seen on the web, showing the frescoed ceilings of the great barrel-vaulted rooms.

And since the place is now closed to visitors (see the Construction of the Domus Aurae website), it really gets much less than 1% of the traffic to the Colosseum.  (Technically, the Colosseum gets an infinitely large fraction of traffic, since it's 4M-to-0 ratio, but I digress.)

Oddly enough, while writing this note up, I found another photo of me taken from directly across the street from the mystery photo of above.  (Check on the notch in the rim of the Colesseum--you'll see they STILL haven't repaired it in 8 years.) 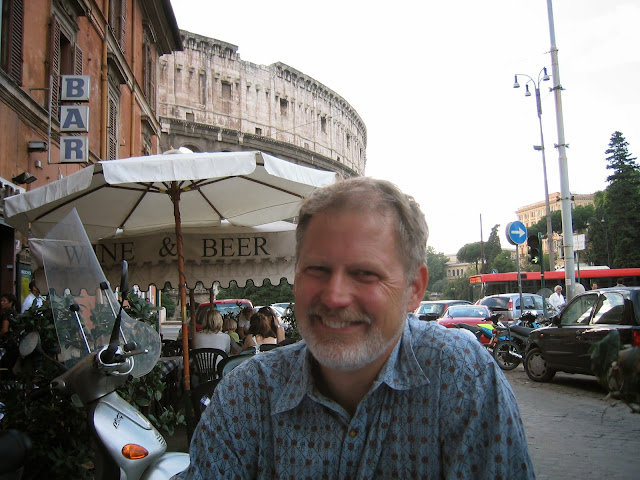 There are a couple of search lessons here:

1.  Sometimes taking a sub-picture of the whole picture will allow search-by-image to work correctly.  As you saw, I selected just the most likely part of the image to be photographed by other people.  This is an example of looking for the most specific case, and is a strategy we'll return to in the future.

2. Google Maps now includes Earth and we have the Pegman back to get to Streetview.  And with this, we now have all new kinds of search capabilities that previously you could only do with Earth.  Welcome back, little yellow man!