When searching for an insect...
... be sure to think about how many insects there are.


As we see from the first two butterflies here, insects often seem very similar to each other. And there are milions of insect species, making identification sometimes a bit of a challenge.

Luckily, these two butterflies are fairly straightforward to identify using a quick Search-By-Image and reading just a bit. 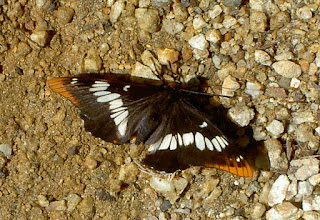 To begin, I did the obvious and ran an Image Search for this pic and, oddly enough, I saw this:

Notice that butterfly, 2cnd row, 3rd from the left?  That's close, but it's not the one we're looking for... it's butterfly #2 below!  That's fine--unexpected, but good enough for me.  I'm always happy when serendipity comes to call.

When I clicked through to the landing page, I learned that Butterfly #2 is called the California Sister (Adelpha californica).  A bit of checking around with that name verifies that AND (helpfully) a few articles point out that this butterfly (#1) is a Lorquin's Admiral.


"The Lorquin's Admiral (Limenitis lorquini), lives along coastal areas and stream sides in Western North America. The often thin, mustard color patch on the end of the wing differentiated it from the California Sister."  link


2.  What's this?  (Note that it's very similar, but not quite the same as butterfly #1.  This one was found in Santa Clara County.) 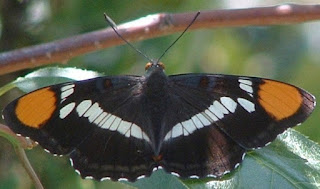 Now we know that THIS is the California Sister (Adelpha california).  Since these two are easily confusable, I thought I'd look for BOTH in a single query:

and found an image of all the Sisters (both Arizona Sister and California Sister), as well as additional information about range, location, etc.

However... this next one is a little tricker...

3. What insect is making this sound?  Can you figure out not just the kind, but also the genus and species names?   (This was recorded around 6PM on a warm summer's day at the Pearson-Arastradero Space Preserve.)

I've already told you it's an insect... but now what?  How would we figure out what kind of insect is making this sound?

I know that crickets can generate sounds, and that cicadas can as well.  But let's begin as though we really don't know what's going on:

From this we learn that there are at least 3 different insects to consider: cicadas, crickets, and katydids.  Each of them has a distinctive song.

I don't know of any app that will identify insect songs (unlike, say, Warblr, which DOES identify bird songs by a Shazzam-like reco app).  So I did a quick search:  [ cricket song recogntion app  insect ]  (not that I had to add "insect" into the query to avoid all of the references to the game of cricket).  Lo and behold, there IS such an app!  Cicada Hunt will identify different species of cicadas... but only in the New Forest in Britain.

In any case, after hunting for a while I didn't find any possibly working apps.  Back to the drawing board.

which led me to the wonderful site, SongsOfInsects.com which has a few really great pages to help us out in our quest.

First, their Identification Page teaches many of the basics of insect song identification. This page tells us the difference between a trill, a chirp, a lisp, a zit, and so on.

This page also has some great basic identification advice: "When listening to the songs of singing insects, determine whether the song is pure-toned, as sung by crickets, or harsh, as sung by katydids. This will immediately place you in one “family” or the other and allow you to narrow down the identification much more quickly. Listen for the timing of the sounds, do they come as a short series, a long continuous trill, is there any pattern to the sounds, are the sounds harsh or mellow. With a little practice you'll be amazed at how many species you can identify by ear."

That's great advice, so I spent a happy hour or so listening to a LOT of different insect sounds.  The query:

I clicked around through LOTS of cicada, cricket, and katydid songs to teach myself the differences (including this library from the Entomology Department at the University of Florida, and this one from MusicOfNature with 20 common crickets, cicadas and katydids, or, if you're really into this, here's a CD you can buy with even more cricket recordings).

It turns out that after listening to a lot of recordings, you CAN learn to tell cicadas from katydids from crickets.  To my ear, cicadas are buzzy, while katydids have lots of high frequency white noise, and crickets tend to have more pure, often trilling, tones.  (Check out the 20 different examples from MusicOfNature--it's easy to compare them side-by-side.)

So, I'm pretty sure it's some kind of cricket.  My recording is pretty clearly a trilling sound, possibly produced by many different insects all overlapping with one another to produce a constant sound.

After looking through lots of videos (YouTube has a ton of cricket songs) and listening to a lot of audio files, I'm pretty sure this is not just some kind of cricket, but specifically a tree cricket.

Returning to the site SongsOfInsects.com, I quickly found their summary Thumbnail-Guide-To-Species which lets you listen to another entire set of sample songs.

From this page, it seems that of the songs listed there, the best match is one of:

* Black-horned tree cricket (but it only sings at night, so that doesn't work)

* Broad-winged tree cricket (but also nocturnal, and lives in the eastern US)

* Fast-calling tree cricket (sings during the day, but lives in the southeast)

* Four-spotted tree cricket (sings in the day, lives everywhere in the US, and despite the name, it lives in fields of weeds)

Ideally, I should either find a live insect in the act of singing (and then capture it and subject it to a detailed examination) OR do a spectrogram analysis.  As you probably noticed, the recording really wasn't good enough to do that... So, I'll try to get back there later this week and get another sound sample.  We'll see if I can succeed.

In the meantime, I think we found our insect:  The Four-Spotted tree cricket (Oecanthus quadripunctatus).  For the best images I've seen, check out Sylvain Trembeley's SmugMug collection.

The butterflies were pretty easy, but in truth, we got lucky; it could have been really difficult, requiring insect identification keys, close examination with hand lenses, and all that.

But as we saw, identifying the insects by sound might have been possible by app (and it might be some day), but at the moment, you just have to invest the time to learn the lingo (trill, buzz, zit, lisp) and what kinds of insects sing at all.  Then, it's just a matter of listening to a LOT of bugs.

Lesson learned:  Sometimes you just have to put in the time.  Google is great for many things, but being a detective or investigative reporter sometimes takes a little work.

Hope you enjoyed this natural history / entomologically inclined Challenge!  (I certainly did!)