Answer: What and why are Thanksgiving traditions?

I wrote the Thanksgiving SRS Challenge before answering the previous one (about  California fire data).  I'll answer that one later this week to catch up.  But today, let's talk about Thanksgiving.


As you recall, the Challenges this week were apparently fairly simple.  Here are the questions and what I did to find answer to each...


2.  What Thanksgiving (and equivalent) traditions do different countries have?  (I bet they don't all eat turkey with cranberry sauce... that's particularly North American.)


3.  Speaking of ritual foods (turkey, cranberries, etc.)... what ritual songs are associated with the holidays?  Many other holidays have associated songs--why not Thanksgiving?  What am I missing?

Here's what I did to answer these Challenges....


My first query was:

Which gave me this result: 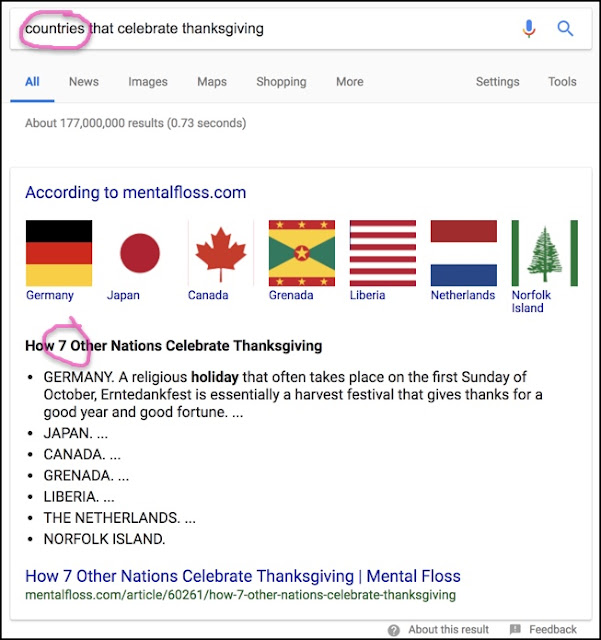 If you follow the link to the MentalFloss.com page, you'll learn that they have 7 countries listed.


1. Germany (first Sunday of October).  Erntedankfest is a harvest festival to give thanks for a good harvest.  Preferred foods are specially fattened up chickens (die Masthünchen) and hens (die Poularde), capons, and geese.

3. Canada – much like the US version but on a different day.  Canada celebrates Thanksgiving on the second Monday in October.  (In French, it’s  l'Action de grâce.)  It was first celebrated in 1578, when English explorer Martin Frobisher gave thanks in present-day Nunavut. Parliament made it a national holiday in 1879.

4. Grenada version of Thanksgiving is held on October 25 every year, Grenada's Thanksgiving marks the anniversary of the 1983 U.S. military invasion to restore order after the death of communist leader Maurice Bishop. American soldiers who were stationed in the country told the locals about the upcoming US Thanksgiving holiday. To show their own gratitude, Grenadians surprised the soldiers with meals like those they described, complete with turkey and all the fixings.

5. Liberia celebrates a version of the US Thanksgiving (recall that Liberia was founded in the 19th century by freed slaves from the U.S.  Here, it’s celebrated with cornucopias (literally!) of fruit baskets (bananas, papayas, mangoes, and pineapples).

6. Leiden (in the Netherlands) celebrates a version of Thanksgiving in recognition of the early Dutch migrants who left Leiden in the early 1600 for the New World.  Today, the people of Leiden celebrate a Thanksgiving day on the fourth Thursday of November with cookies and coffee following a non-demoninational church service.

7.  Norfolk Island (a remote island in the South Pacific between near Australia also owes its Thanksgiving holiday to visiting U.S. whalers visiting the region in the middle 1890s.  Today, on the last Wednesday of November, the locals bring fruit and vegetables to the church to celebrate the Thanksgiving holiday.