SearchResearch Challenge (2/28/18): How did this group of houses get to be here?


You know San Francisco is full of hills...

... consequently, it's also full of stairs.  Some are ordinary, but some are wonderful and beautiful.  Here's one of my favorite places in SF, not just for the view, but also for the cherry trees that bloom in the spring, the steepness of the steps, and the freshness of the breeze off the Bay, all of which makes for a great morning run.


Lyon Street marks the eastern edge of the Presidio, the old fort in the heart of the city.  It's the best repurposing of a former military base that I've ever seen.


As a former military base, the perimeter of the base either follows natural boundaries (e.g., the edge of Lobos Creek in the lower left), or is an arrow straight line.

So it was a huge surprise to see this as I jogged up Lyon Street:


See those houses on the right side of the street?  Why are they there?

The thing that struck me was that the low wall is the edge of the Presidio.  If that's the edge of the base, why would there be six civilian houses here.  When you look at a closeup of the map, it becomes even stranger: 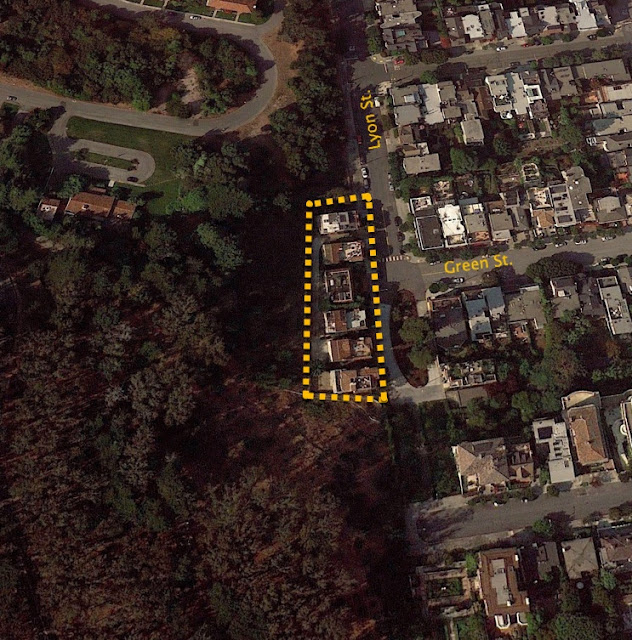 Those red-roofed buildings on the left are (former) military houses.  The buildings on the right of Lyon Street are all civilian.  But so are those six houses that somehow managed to sneak inside the boundary of the base.

The Presidio has been here for a LOONG time.  There's been a military fort in this location since 1776, when the first Spanish set it up as a forward base in Alta California.

This odd set of houses has troubled me for years.  Can you help me figure out what's going on?  (It took me a while to get to the answer.  How long will it take you?)

1.  What's the story behind this odd row of six houses that are inset into the natural boundaries of the Presidio?  How did this state of affairs come to be?


I'll tell you now, once I figured this out, several pieces of history all suddenly linked together in ways I hadn't ever expected.  (Even more mysteriously, two of my favorite runs suddenly had a deep connection that I'd never known about.)

Can you figure it out?

Let us know!  (And let us know how you figured this out.) 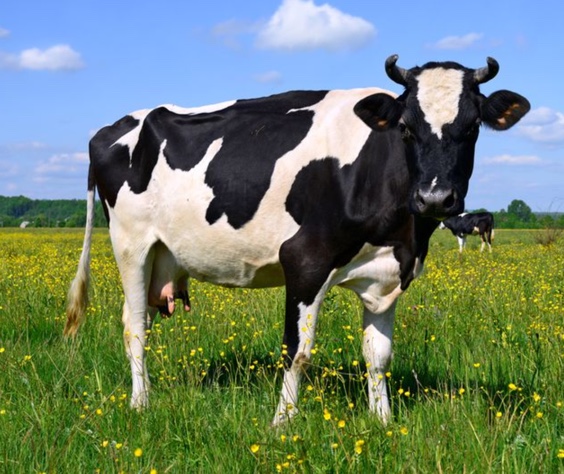 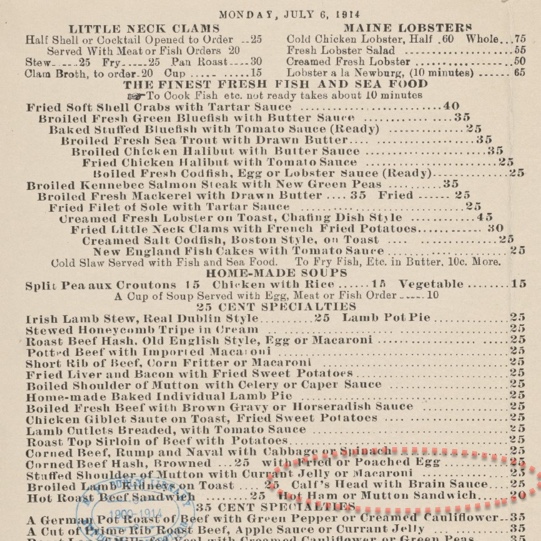 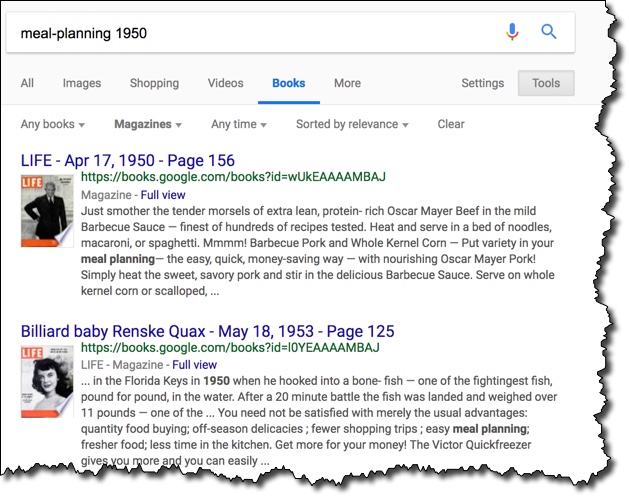 SearchResearch Challenge (2/14/18): How much did this menu item cost?

... the food choices of different people at different times and places.  After all, I've eaten roasted grasshoppers (chapulines) in Oaxaca, smoked eel (rauchen aal) and blood sausage (blutwurst) in Germany, along with haggis in Scotland.

But I hadn't appreciated how much our commonplace and customary dishes have changed over the past 60 years.  Haven't we always been a land of peanut butter and jelly sandwiches?  I recognize that it's very common to eat boiled soybeans (edamame) these days, and it's easy to find sushi in your local grocery store.  That's a big shift over the past couple of decades.

So I was surprised when I happened to discover that a few popular dishes from the 1950s were broiled liver pudding and boiled calf's head with brain sauce, which seem a bit over the top.  (Although I do admit that my father enjoyed scrambled eggs and brains, so go figure. I didn't inherit that dietary preference.)

Fascinating.  And this leads to today's Search Challenge:


In all cases, you have to tell us (A) how you found the prices, and (B) some evidence that a food item was rare (or common) in the time-frames we're interested in.  (For instance, evidence might be an advertisement in a newspaper from 1959 in your locale.)