Answer: What does extra-claustral mean?

The story here is that I was really looking up something about the history of books and the relationship between printed copies and how ideas of credibility (Do you believe what a book says, or not?) change around the time of the introduction of the printing press.

In any case, I ran into James O'Donnell's article on why printed books are here to stay, and found the following phrase:

"I here count the friars and other extra-claustral religious orders..."


And while I had seen the word "claustral" before, I wasn't really sure how O'Donnell meant "extra-claustral."  Did he mean that it was "super-" claustral (with the prefix 'extra' meaning "an increased amount of")?  Or was he referring to a particular set of beliefs of the friars?  (Something like "extra-orthodox"?)


Here's what I did to figure it out.


First, I tried my usual Google trick of using the define: operator.  [ define:extra-claustral ]   I didn't think it would work because of it was a hyphenated word, but it was worth a try.


Next I tried my backup method of just asking for [ define extra-claustral ] but that wasn't especially rewarding either.   But I DID notice that there were some definitions for just the word "claustral" (and even "claustrum," a variant I hadn't thought about).


So I went back to the define: operator to do [ define:claustral ] and learned that the primary definitions have to do with a thin membrane in the brain.


But the last definition mentioned cloister-like.  That sounded useful--I already knew that cloisters were part of the building where monks would be.


(Of course, it should be mentioned that I tried the obvious Google search for [ extra-claustral ], but the results were either about the brain membrane or at places like OxfordJournals.com and JSTOR, neither of which are especially useful since they hide their contents behind paywalls--you can't get to them without paying. More on paywalled results another day.)


I realized that what I needed to do was to see this word used in context across many different settings to see what the range of possibilities could be.


So I went to Google Books and did a search for the term. 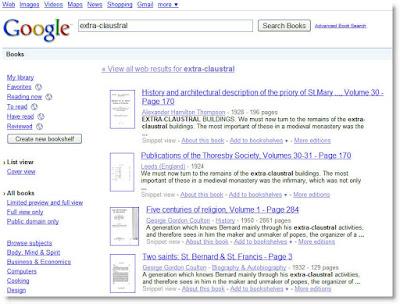 Just reading the snippets told me a great deal.  (A "snippet" is the black text beneath each document hit that summarizes the searched-term in context.)  The snippets tell me that "extra-claustral" refers to buildings that are "outside of the cloisters"  AND lets me know that "extra-claustral" can also refer to activities that monks pursue that are not a part of their regular churchly duties.  Ahh... now it's beginning to make sense!


Your 4th grade teacher probably told you this--that meanings can often be figured out by context, and they were right.


But there's one more trick to point out.  The web is full of wonderful resources that amplify our intelligence.  One such resource is Wordnik.com -- a site I turn to when I want to understand a word with a great deal of context.


So I went to Worknik.com with just the word "claustral" and found the following: 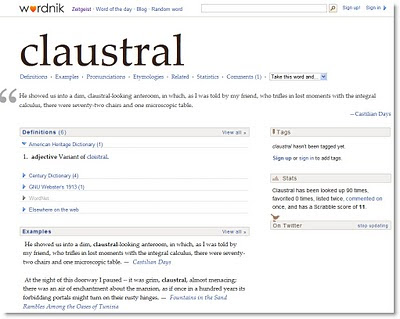 And now, understanding the prefix "extra" as meaning "outside of," the intent of O'Donnell's use of the term became clear:  "extra-claustral" in his sense was "activities outside of the regular scope of the church's work."


Between Wordnik's wonderfully selected quotations providing a richer set of interpretations, and Google Books finding the exact term in many actual instances of use, I came away with a deeper understanding of what the article was all about.  Search on.