When she asked this question, I felt very much like a reference librarian who's asked to identify an insect that a young patron has brought in.

With a question this open-ended, and since the insect in question wasn't around, the only approach that would make sense is to look for images of the bug.

Note that in a case like this, doing a regular Google Web search for [ california insect brown stripes on abdomen slow-moving ]  just isn't a high probability search.  There are LOTS of insects like this.

But more importantly, would she be able to identify the right insect given a textual description?  Probably not.  She wasn't an entomologist (if she were, I would use a totally different approach).

Instead, I was hoping that the insect was big, slow-moving and obvious--and so I bet that someone had taken a picture of such a bug and had posted it on the web.

So I turned to Google Image search and did the simplest possible query that I thought might work:

I know that's too open-ended, but I was hoping.

So THEN I tried filtering on the color brown.  Did you know you can filter images by dominant color?

Here's how to filter image search by color:

See the "Show options..." button on the last line of the screenshot? 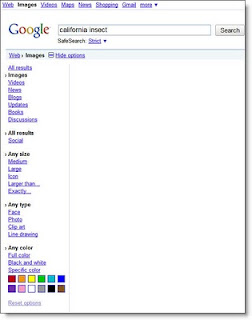 This gives you a whole slate of new options / new ways to filter the hits you're getting back from Image search. 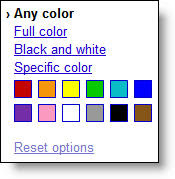 Since she said it was a brown insect, I thought I'd try filtering on the color brown. 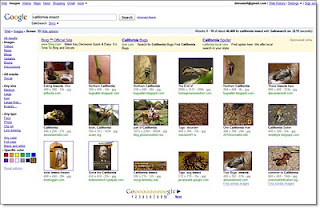 I didn't KNOW that this would work, but it only takes a couple of seconds, and I thought MAYBE it would be a common enough insect to show up in the first page or two.
Success!!  The big, ugly, brown insect with stripes on the abdomen showed up in the lower right corner of the first page.
The bug is a Jersualem cricket, a large, flightless cricket common in California.   (see: Stenoplematus fuscus,  http://www.insectidentification.org/insect-description.asp?identification=Dark-Jerusalem-Cricket for more details).
Bottom line:  A good tactic when looking for common things is to just try doing the obvious search (in this case, on images, since any textual description is likely to be confusing, and confirmation is much easier by sight), then applying filters to get to the details of what you want to see.
Posted by Dan Russell at 8:52 AM