Answer: What is that thing in the sky?

First off... it's not a UFO, as a couple of people suggested!


As I mentioned yesterday, finding things like this--objects or concepts that you don't already know the name for--is pretty hard.  And this is no exception.


If you do the obvious search:  [ bright spot sky  ] none of the first page of results is useful.  While starting with a few words is often a good strategy, the query [ bright spot sky ] is a bit too generic.  In essence, you haven't said much that the search engine can get its hands on.  This query is just a few words, and not any usefully descriptive phrase.


If you add just one word to make it a slightly more descriptive phrase, a la  [ bright spot in sky ] you'll find something useful way down in the 10th result (way at the bottom of the page).  There you see the first reference to a term you might not recognize: sun dog. 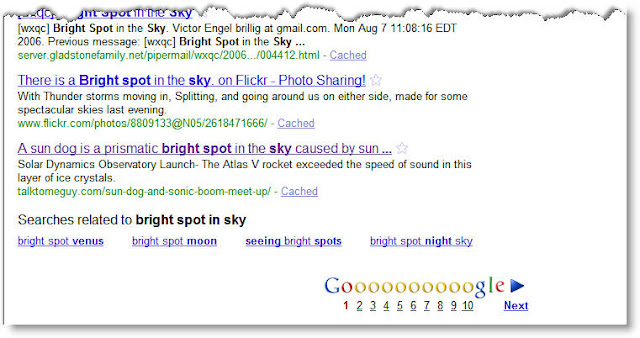 The last result mentions "sun dog"--could that be it?

All of the other results are about astronomy and the night sky.  Unfortunately, the link is to a video of a rocket liftoff showing shock waves in an atmospheric ice crystal layer.  More about that later, but it doesn't seem directly relevant.


Except for that term "sun dog"--why is it there?


A quick check with define, as in  [ define:sun dog ] teaches us that a "sun dog" is "an atmospheric phenomenon that creates bright spots of light in the sky, often on a luminous ring or halo on either side of the sun"  (Google found this definition on Wikipedia).


Now that we've learned this likely sounding term, we can go to Google Images and look for pictures of [ sun dog ]

This second image looks so much like the picture that I took with my phone that I'm pretty confident that this really IS a sun dog.  A check on Wikipedia (query for [ sun dog ]) shows a pretty nice article with multiple images of sun dogs.


And that's what I saw on Tuesday--light reflecting off of a high, thin layer of ice crystals--a sun dog that's caused by sunlight reflecting off the ice crystals way up high.  Often they're invisible.  (But that 10th result from the query [ bright spot in sky ] is a beautiful short video of a rocket launch.  The shock wave as the booster goes supersonic is made visible by the rippling of the ice crystals as the pressure waves ripple the crystals, just like rippling water from a stone tossed into the still pond.)


Interestingly, while that video wasn't useful in and of itself, the text of the snippet suggested that there maybe was a term we could use in OUR search.


That turned out to be the trick.


As you search, you learn.  As you learn, you can improve your search targeting by using terms that you pick up along the way.