Answer: Where did seedless grapes come from?

You'd think this would be simple.  (But then I wouldn't have posted it if this was trivial, eh?  Or would I... How diabolical IS Dan?)


I did the first, obvious query:  [ seedless grapes ]


I read the Wikipedia article which tells me that sultanas--also known as Thompson seedless--are probably the most common (widely grown) kind of seedless grape.  (This gets a little complicated because the word "sultana" really refers to a kind of Turkish grape, AND is the common name for "raisin" in much of Europe.)  But after poking around a bit, it's pretty clear that while seedless grapes have been around intermittently (as mutant variants that didn't breed true), the Thompson seedless is the dominant kind of seedless grape.


So, let's look up [ Thompson seedless ]
I'm hoping to find some nice general articles about this variety of grape, maybe with some background.


The first hit is an interesting, if somewhat technical article from the University of California Cooperative Extension. It's useful (if you raise Thompson seedless grapes in volume), but not useful for our purpose--there's no history here.


The other articles on the SERP are similar--interesting, but not useful to us.


How about the query:  [ Thompson seedless history ] ?  Here, the first hit is from Raisins.org (which turns out to be a page from the Raisin Administrative Committee in Fresno, CA, not far from where I saw all the grapes).


On this page they mention that William Thompson (an immigrant from Scotland) introduced the Lady deCoverly seedless grape. Interesting.  Should we believe the story?  Maybe.  They're located in Fresno and have historical ties to the grape industry, so it makes sense that they'd know.


But let's dig deeper and triangulate this bit of information.


The 3rd result on this page is a link to the "Historical Marker Database," a record of roadside history markers.  (Interesting source--not necessarily a source of grape history expertise, but let's read what they say.)


"Thompson... in 1872 sent to New York for three cuttings called Lady deCoverly of which only one survived."


Even better, they claim that the first Thompson grape was grown on his farm near the site of the marker: 39° 8.723′ N, 121° 46.924′ W. near Yuba City, California, in Sutter County.  While I might not trust their agricultural history, I do trust their location markers.  But this page also gives a link to the Sun-Maid Raisin company's "History of raisins and dried-fruit" page which claims that Thompson got his original vine from the "Almira & Barry Nursery" of Rochester, New York.


Fascinating!  As it turns out, I used to live in Rochester, and while I don't know of any "Almira & Barry" nursery, there was a famous nursery called "Elwanger & Barry Nursery" in Rochester that was around in the late 1800's.  (I know this because Elwanger is buried in the cemetery next door to where I lived in Rochester.  Fun fact:  His grave marker is encased in a tiny greenhouse, built just for that purpose.)


The plot thickens.  Continuing down the SERP, the 5th result links to an eZine article on the history of grapes for raisins.  This article, by writer Patrick Malcolm, argues that Thompson renamed/remarketed the grapes from the Lady deCoverly as "Thompson Seedless."


When I dig a little into the background of Patrick Malcolm (to see if HE is a credible source), I quickly find that he's written many, many articles on the history and development of different kinds of plants--especially agriculturally important plants... so I'm inclined to believe him.


The 8th result on the SERP is a link to MadeHow.com, which claims that Thompson seedless is a Muscat vine grafted onto an English grape variety.  But THAT doesn't make any sense--how would you propagate something like that's a graft?  We already know (from the other web pages) that Thompsons are made by taking cuttings off the original vine--a graft won't copy itself like that, so that story doesn't make any sense.


However, this article DID have a great image of a raisin seeder!  (Before there were Thompsons, people would have to remove the seeds from the raisins:  Here's how.  the raisins were squeezed between two grooved rubber and toothed-metal rollers, which exposed the seeds. The seeds were then forced out a chute at the front (pushed out by the metal-toothed rollers) and the raisins dropped below the rollers

Remember that our task for this challenge is to:


1.  Where did the first seedless grape originate?  (Can I get a lat/long??)
2.  What's the story behind its production?
3.  If it diverged from a previous kind of grape, what was that progenitor?


AND that the context of this question was "I saw seedless grapes in the Central Valley."


At this point we already have a strong clue that Thompson seedless are originally Lady deCoverly, then  renamed by William Thompson around 1875 or so.  This is almost certainly not the first or only seedless grape, but certainly the first commercially produced seedless grape.  Thompson's farm was near Yuba City (see the exact location above).  So we've just about answered all our questions. The place of its "renaming" was there, near Yuba City.


The only odd thing left is the name of the nursery--"Almira"?   "Elmira" is a city in upstate New York, but it's not a nursery.


tip:  For historical questions like this, it's often really good to look in Google Books.


So I turn to Books.Google.com and do a query [ grapes history ] -- which quickly leads me to the book:
The Raisin Industry:  A Practical Treatise on the Raisin Grapes, their History, Culture and Curing


This book was published in 1890 in San Francisco, so it's both near the scene of the crime and in the right time. 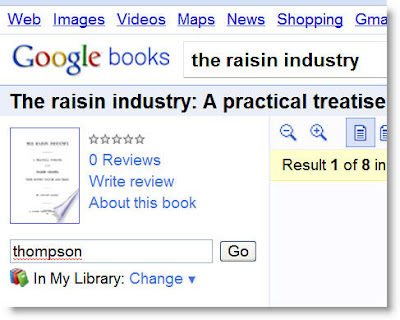 For search purposes, this little tale shows that there can be multiple versions of the story ("it's grafted!"  "it's Lady deCoverly!")   For historical reconstruction, it's really not enough to just read the first hits, but you need to keep digging and cross-checking.    Note that "Ewanger & Barry" is correctly noted in this document, which correlates with what I happen to know from having lived in Rochester, NY!


(And, just to titillate you historical searchers even further, the 2001 issue of "Wayward Tendrils" argues that Thompson concocted a story about receiving three "unlabelled" grape cuttings from Elwanger & Barry... just so he could make a better marketing story for his "new" grapes.)


The search never ends... you just get confident enough to make the claim.