When I got this problem, I started by looking for the script, figuring that it would have the shooting locations specified.

[ script "fast and furious" ]  -- I was actually hoping to find a shooting script. And...  I found a script, but it only had the dialog (so I know what they said at the shrimp place, but not where it was).

So I gave up on the script idea and went with the "shrimp shack" idea.

[ shrimp shack  "fast and furious" ] -- then a couple of deadend clicks before I saw on one page that I visited that it was in Malibu. (Here's an example of domain knowledge... Since I grew up in LA I know Malibu is on the coast; just as I also knew that San Fernando is NOT on the coast, so I didn't bother with any searches that involved San Fernando.)

So I started working on the Malibu angle...

[ shrimp shack  malibu "fast and furious" ] -- and the first result is perfect.  It told me that it's Neptune's Net, on the Pacific Coast Highway near Malibu.  (Or, what the locals would call "PCH" -- aka Hwy 1.)

But naturally, I wanted to check this, as this page could be totally incorrect.  To check my work,

[ neptune's net fast and furious ]  for which the first result is a list of shot locations for the movie.  Since the page gives the street address for the Neptune's Net restaurant, it was easy to verify that this is in fact the correct place (see picture below for the StreetView image). 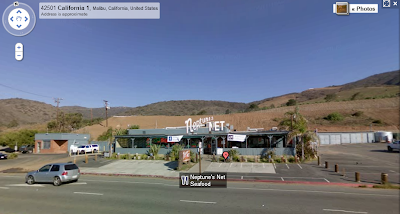 Looks pretty much like the movie shot.  And now that I look at it, I realized I've been here.  (Growing up in LA, it's a place to go... I just didn't realize it was connected to the movie!)

Comment:  Interestingly, commenter Fred Deventhal pointed out that filming locations are also a feature in IMDB.  Knowing this, I suspect he was far faster than I was.  The query:
[ fast and furious imdb filming locations ] gets you to a pretty authoritative answer quickly.

My takeaway from this example is twofold:  (1) including the names of "only in the movie" restaurants isn't a great pathway to search...  and (2) IMDB is a pretty good resource for movie information, including shooting locations (but be sure to use the language that IMDB uses--"filming locations").