Short answer to the challenge... The Egg of Columbus

(But read on for the rest of the story!)

This search challenge was harder than I thought… but for an interesting reason.  I’ll take the blame here—the question (“English 4-word idiomatic expression for something thought to be impossible, but shown to be trivial”) is not exactly a cleanly defined, clearly answerable kind of question!

As a consequence, people found all KINDS of answers that I hadn’t thought about.

Forest for the trees
Cutting the Gordian knot
Thinking outside the box
Keep it simple stupid
Hiding in plain sight
To square the circle
If it were a snake it would have bit me  (so close… but too long!)
Elephant in the room
Needle in a haystack

And even some unusual ones:

Alas, while many are close, they’re not exactly right.  “Cutting the Gordian knot” has the right sense of a sudden rapid solution to an unsolvable problem.

Thing is, I hadn’t thought of that phrase as a possible solution.  So kudos to those of you who made all of these suggestions.  I’d put “Cutting the Gordian knot” as a correct answer, with  “Forest for the trees” and “thinking outside the box” as decent half-credit answers.  (They don’t saying anything about the solution, just the path to the clever solution.)

As you can see, writing a nice, hard search problem that has a neat, instantly recognizable solution is tricky.

Out of the roughly 20,000 who read this problem, only 3 found the answer I planned:  JacobM, Johns1111 and Amarek all found what I’d INTENDED which is such problem/solutions are called “The Egg of Columbus”--as in the sentence "That's a real 'Egg of Columbus' type problem.'

JacobM solved the problem by searching for  [ seems | looks impossible ]  (where the vetical bar symbol means OR).  He found some idiom collections and flipped through them until finding the right one.  This is a really good approach!

In the comments, Johns1111 points out that in German this would be “das Ei des Kolumbus,” which is a transliteration of “The Egg of Columbus,” and, in my opinion, quite correct.  Congrats also to Amarek for also finding  the same solution.

The Back Story to this problem:  This problem was originally given to me by a friend who knew that such a phrase existed, but he couldn’t think of what it was.  If it makes you feel any better, I worked on-and-off on this question for about 4 weeks, trying new ways to search for it… basically looking for a way to rephrase the question so that the results would contain the answer.

My reasoning was that someone writing about this idiom would have to use the phrase after the fact and use that phrase in the context of discovering  an easy  solution.  That's how I chose my search terms.

Luckily, it worked out well.   But truthfully, only after a lot of systematic search on my part.

The Wikipedia entry for "Egg of Columbus"  has the following explanation for the phrase which I like.

The Egg of Columbus story might have begun with the Italian historian Girolamo Benzoni. In his book History of the New World (1565) he wrote:Columbus was dining with many Spanish nobles when one of them said: 'Sir Christopher, even if your lordship had not discovered the Indies, there would have been, here in Spain which is a country abundant with great men knowledgeable in cosmography and literature, one who would have started a similar adventure with the same result.' Columbus did not respond to these words but asked for a whole egg to be brought to him. He placed it on the table and said: 'My lords, I will lay a wager with any of you that you are unable to make this egg stand on its end like I will do without any kind of help or aid.' They all tried without success and when the egg returned to Columbus, he tapped it gently on the table breaking it slightly and, with this, the egg stood on its end. All those present were confounded and understood what he meant: that once the feat has been done, anyone knows how to do it. 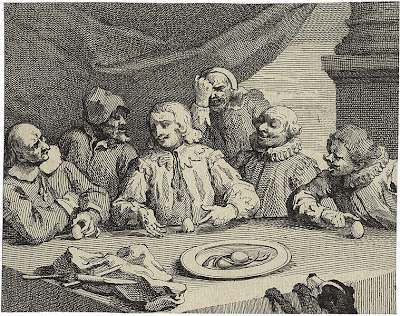 Image of Columbus breaking the egg, by William Hogarth.
Original in National Portrait Gallery, London.  This image from Wikipedia.

Whether or not the story is true, it has entered into the world as an idiomatic expression for "seemingly impossible to solve, but actually trivial."  An excellent idiom.


Search lessons:  (1) First, as should be obvious, finding idioms is hard.  People who searched in idiom dictionaries were on to something.  That’s a great strategy for searching out this kind of information.  I tried a couple before giving up, hoping to stumble across it (which is what happened).

(2) You sometimes have to search for the right query.  I tried a lot of queries in my search (at least 100 over the 4 week period) before I found the right combination of search terms that led me to the answer.  I was really interested (which is why I dedicated so much time to the problem).

My big tip about long searches is pretty simple:  Keep track of what you’ve searched for and found.  That’s especially true for long search processes that take weeks.  I just kept an open text file with my “search notes” in it.  It really prevented me from duplicating my searches and let me systematically eliminate possibilities.

Search on!  (But systematically...)