Answer: How many people cross the waters?

If you already know that Logan airport is in Boston, then you can save a search step or two.  But if you don’t, you need to first lookup [Logan airport] and figure out that “crossing the water” means getting from the airport (which is out in the bay) to the harbor on the mainland. 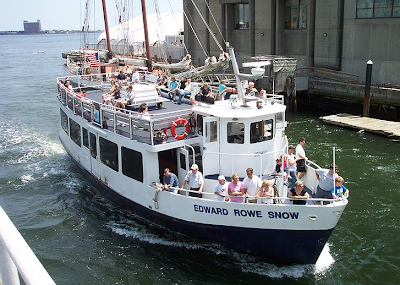 In either case, you’ll quickly learn that the correct term for this mode of transport is either “ferry” or “water taxi.”  The word “ferry” made sense to me, but I’d never heard it called a “water taxi,” so that was new to me… and suggests my next query:

Here the key is that I used “ridership” to find documents that would give me data about numbers of passengers / day, and I put “water taxi” in double quotes to keep that phrase fragment together and not find lots of hits about “water” and “taxi,” both of which happen a lot in Boston.   (Note that I might have also included the term “weekday,” but left it off at the beginning of my searches just to stay broad at the start.) 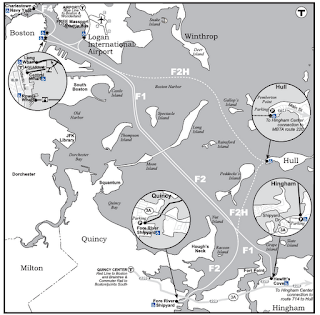 That’s good, but I wanted to dig a little deeper and see if I couldn’t find something more recent.

A bit farther down the SERP I found a data point of 1.3M/yr  (= 3.5k/day) from this report by“Save the Harbor” and “Save the Bay” (with the cooperation of the City of Boston).  But it’s from 2004, and I thought I could find something a bit more official.

All of this lead me to discover that there is a document put out by the MBTA (which owns the boats) called “Ridership and Service Statistics--2009”  I knew I could find one from 2009 (which includes the data from 2008)  In this tome you can find (in section 5)the data: “Total Ferry Ridership by FY,” showing a slight decrease between 2007 (1.40M) and 2008 (1.29M).  But if you read the document carefully, you'll find the section where they've broken out the average weekday ridership traffic!

But now that I know this kind of document exists, I can search for the most recent edition, which turns out to be from 2011… but only includes ferry data from 2008.  The search is obvious now:  ["ridership and service statistics" MBTA 2011]  In that document from 2011 you’ll find the total ferry ridership is back up for 2009 (1.5M during the year).

Search lessons:  As in many cases, you first have to figure out what the language in-and-around a topic needs to be.  When I posed the question, I specifically didn’t say the words “ferry” or “water taxi” (or even Boston).  All those parts had to be looked up if you didn’t already know them.  Younger searchers (especially those in California) might not know anything about where “Logan” is, so they have to find that as well.

And once you know that a particular KIND of official data set exists (the MBTA’s “Ridership and Service Statistics”) you can go download the latest edition.  Armed with a bit of terminology and the tactic of looking for the latest edition, you are a powerful searcher!