Answer: What are the names and styles of those buildings?

I solved the problem of building #1 by using the “fill in the blank method” using the * operator.

I had a sneaking suspicion that I had the second name wrong, so I did a query of:

and that quickly told me it was the “Adam Grant” building at 114 Sansome Street, downtown SF.  (I admit I got lucky on this.  I could have also had the first name wrong, but I found this quickly with just one search.)

I then switched to Google Street View to look at the building next to it.

Now the problem is that there are two directions to go looking for the second building. Since the Adam Grant building is on the corner, you could go down Bush Street, or down Sansome Street.

But the building at 140 / 142 Sansome is pretty plain; certainly not “more beautiful” than the Adam Grant building at 100 Bush.  So let’s Streetview down Bush Street in the other direction.

If you move down Bush street you’ll see that there’s a building front at 130 Bush.  But look carefully—it’s definitely white and beautiful (with a distinctive outward thrusting “oriel” style), and it’s also VERY narrow.  Look carefully at this picture and you’ll see what I mean.

Truthfully, when I was driving, I thought that it was all part of the much larger building next to it on the right as you look at this picture... the well-decorated Shell building at 100 Bush.  That’s actually the one I meant, but maps are useful for illustrating the truth of the situation.  And once I looked at the Maps view (with 3D outline of parcels), you can clearly see the outline of the building at 130 Bush AND the building at 100 Bush (the Shell Building).

This tall, but narrow building is fairly remarkable.  It's technically the "building next door," but I completely missed it in real life! 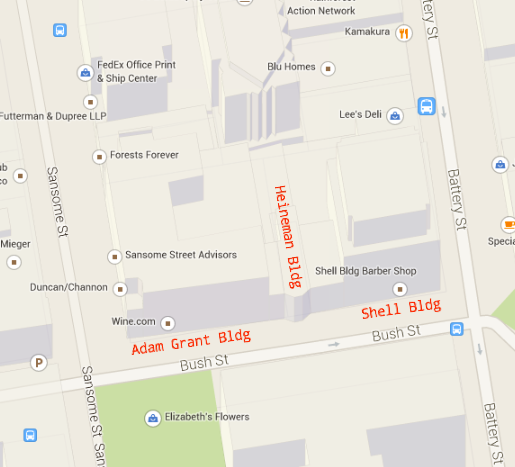 ..told me that this was the Heineman Building.  This “elegantly slim, 10-story building” was once the tallest of its neighbors, and decorated in a “gothic façade” with terra cotta tiles and copper panels.  It was originally a necktie, belt and suspender factory.  (This is from the SFGate article on theHeineman Building, quoting the book “130 Bush: An Illustrated Story About FourBuildings and a Monument in San Francisco” by L. G. Segedin.

(Unfortunately, I could find this only on Amazon.  It doesn’t seem to be in Google Books.)

But then, next door to the Heineman building is the Shell building, which was the one I was originally looking for… It’s described as a 1930’s masterpiece of Art Deco styling (from the buliding’s own web site:  http://www.shellbuildingsf.com/index.html)

The Wikipedia article on the Shell Building points to the architectural website Emporis, which describes it as a combination of Moderne, and Art Deco.

(And, as reader Remijj points out,  George William Kelham was the architect of the Shell building, the Federal Reserve Bank of SF, the design of the 1915 SF Worlds Fair, the Mount Davidson Cross, and the Hill Bros. Coffee plant... locally famous landmarks, all!)

The Adam Grant building, the one that started us off on this search, is described by Emporis as a Beaux-Arts building that was completed in 1908, but then extended upward by 8 floors in 1926.

Emporis is a nice collection of architectural data.  It’s entry on the Heineman Building describes it as neo-gothic and completed in 1910.  So it must have been the tallest building around for around 16 years until the Adam Grant overshadowed it… which in turn was surpassed by the Shell building just a few years later.

For my money, the Shell Building is the nicest one… gotta love those Art Deco touches.  It’s quite a sight when you walk into the lobby.  As they say, “worth a detour!”

Search Lessons:  I note that, strictly speaking, the * operator for the “fill in the blank” wasn’t necessary, but it worked beautifully in this case.  When you only have part of the puzzle, the * will match 1 or more words to fill in the pattern in a quoted phrase.  Good tool to remember.

WRT “authoritative” resources—I would have accepted entries from almost any book on the architecture of downtown SF.  There’s a great wealth of them, all the ones I’ve seen are nicely researched.

Likewise, Emporis is a strong website with a large collection of data about buildings.  They’re widely known for the breadth and quality of their architectural data.  I hadn’t know about them ahead of time, but I know them now and will recognize their name in future searches.  (And as I’ve said before, sometimes you just gotta know this kind of thing.  Recognizing authoritative sources is a good skill to have.)