Answer: What made that mark on the land?

First off, let me say Bravo!  The SearchResearch squad did a remarkable job on this challenge!  This wasn't an easy problem by any means, and yet the answer was found quickly and accurately.  Bravo, I say!  Bravo!

Let me tell you what I did, and then reflect for a second on other approaches that people took, for they were really interesting.

Remember, the challenge was:

Short answer:  It's a model airplane flying field.  Built in 200

2.  (Extra credit)  If you can figure out the first one, then the second one should be easy too:  Same question--what's the long linear feature between Highway 1 and the rectangle?  When was IT made?  And when was IT destroyed?

When I first looked at the long, tilted rectangle, I immediately thought it looked like an abandoned runway.   The prevailing wind at this location would be a headwind for this angle, so it made a certain amount of sense.

Since I know that archival aerial imagery is easy to get in Google Earth, I just launched Earth and started exploring with the Time slider.  (Remember that we used this method before to search for other archival land images.  Just click on the tool that looks like a clock in the Google Earth toolbar.)

With the Time Slider, I was able to quickly zoom back in time to 2003 and see that there really WAS something there.

As you can see, this pretty clearly IS some kind of airport / landing field.  But whatever kind of airport it was, it didn't last long. This same site in 1993 is a complete blank.
But the "X"s on the runway images from 2003 and 2008 bothered me.  So I looked up what an "X" mark would mean on a runway.  My search for:

led me to the FAA runway marking guideline which says that an "X" on the runway means it's closed.

But that's odd too.  Why would someone build a runway, then immediately close it?  Or maybe never open it?

I then spent a fair bit of time (probably 30 minutes or so) searching for closed or abandoned runways, air strips, landing strips, air fields...  etc etc.  I found a lot of interesting content about closed airports in the greater San Francisco Bay area, but nothing down south of Half Moon Bay, near the small town of San Gregorio (the next town south of this location).

One other thing bothered me about the photo from 2003.  If those white things on the right side of the image are cars, then that would mean the runway is about 2 or 3 car lengths wide.  That seems narrow for an runway.  So I went back to Google Earth and used the Ruler tool to measure the length of the runway.
What's going on?  It's 41 feet wide and 383 feet long.  That's way too small for a real runway unless it's some strange kind of VTOL or STOL aircraft.  Even so, the staging area and ramps are too small for that purpose.

Like a few other SearchResearchers, I remembered that there was a project to fly up and down the entire coastline of California.  I couldn't remember the name of the project (or website), so I did the search for it:

Once there, I searched for "San Gregorio"  and then went a couple of clicks northward up the coast to that point where the bluffs are high and the land is flat.  And found that the image of that location has a very visible green runway on it.  (Wait a second.  GREEN?)  And the label "San Mateo RC Airport." A quick search for the term "RC airport" revealed that this is a remote control airplane airport!  (See the image from the California Coastline project below.)

Ah.  So that's why I wasn't finding anything when looking for "abandoned airstrip" or "runways."  It's not a regular airport.  And that's why it's too small.  A ha!

I figured that anyone who would put this much trouble into making an entire tiny airport for remote control airplanes was probably part of a club, and that I could find their website (or at least a mention of them in a club newsletter or something).

After clicking into the link labeled "R/C flying fields California," I found that there's club operating out of Half Moon Bay (the next largish city to the north), the "Peninsula Channel Commanders" club.

There's even a photo of their airstrip on their website.  It looks very similar... but not quite the same as the air strips shown above.  Huh.  So clicking on the link to the field directions, I found that their current field is way north of where we've been looking.  Sigh.  Not quite right.

But the similarity between their current field and the one in the images above struck me.  So I clicked on the link to their History page and found this.

In 1999, the group moved to a field on the west side of Highway 1 owned by the Deany family. This beautiful location was a bit close to the ocean: many a plane splashed into the Pacific.

A change in land ownership in fall 2008 left the group without a field for a few months, then we found a field a bit closer to Half Moon Bay, owned by John Giusti. We began flying there Feb. 1, 2009, after Eddie Andreini graded the area and volunteers set up the necessary gear.

This history lines up with the images we found on Google Earth ("west of Highway 1" and "a bit close to the ocean") and explains why the airstrip only lasted a few years.

I then remembered another great geo-resource, the GeoHack site (http://tools.wmflabs.org/geohack/) which pulls together all kinds of geo-located information.  By zooming in on our lat/long from above, I found this map: 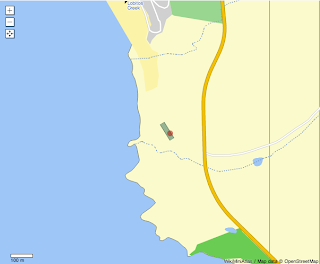 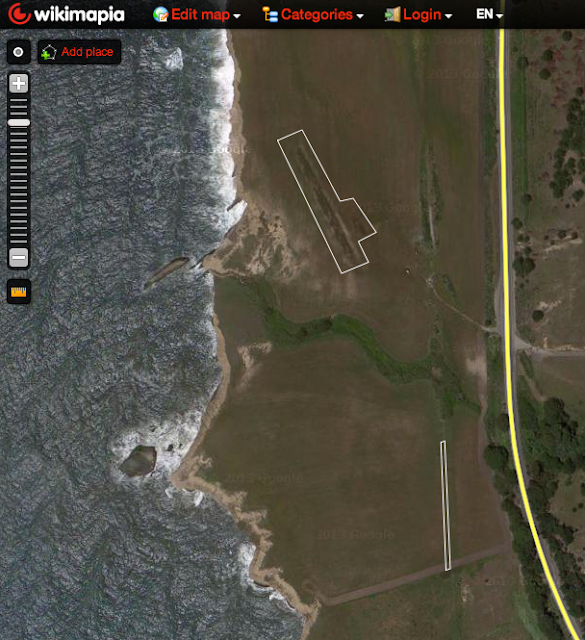 When you roll over the polygon overlaying our target, it shows up as "Model Airplane Field."

So we've figured this one out.  It was the R/C model airplane flying field for the Peninsula Channel Commanders. Here it is in its heyday (2002).


And now, onto the extra credit part.

If you look at the Wikimapia map, you'll see the long, slender rectangle labeled as the "Ocean Shore Railway."  To confirm that it's a railroad, just zoom out a bit.  With a little dragging and panning of the map, you'll see there's a long line visible on the ground that stretches all the way up to Daly City (although you have to jump to the other side of Half Moon Bay when you get there).

You can read a brief summary of the railroad at the Wikipedia article about it.  But for a wonderful read, check out "The Ocean Shore Railroad" by Chris Hunter (2004).

Here's a map I found (Image search).  Grand dreams, never quite realized. As you can see, it went down the coast from San Francisco, through "Spanish Town" (now, Half Moon Bay) and through San Gregorio.
So this is a remarkable bit of history.  Some of it is ephemeral--the RC airfield lasting only a few years--and the railroad, lasting only a few years, but whose mark on the land has lasted for over a century.

I have much more to say--especially about how SearchResearchers found their solutions.  (AND about the discovery of Gordon's Chute, which I totally did NOT expect.)

But this post is getting to be too long as is.  I'll write an addendum later today / early tomorrow with those comments.

FWIW, I spend about 45 minutes running through all of these steps.  And I didn't get sidetracked by other things.  This was a hard problem!

Search lessons: Google Earth is great for archival imagery of an area, but as you go farther back in time, the snapshots get too far apart to be definitive.  Useful starting point, though.

Using other earth imagery resources is often helpful.  Some places (e.g., California Coastline Project and GeoHack) can provide you with very different perspectives on the same location.  It's useful to check them out as well.

Also, I was initially fooled by the appearance of the landing strip.  It wasn't until I measured the size of the strip (using Google Earth's ruler tool) that I realized something was fishy.  Lesson: Check even the obvious for oddities.

More on this topic later...  But for now, nice job.