Answer: What does this character mean?

The question for this week was:

1.  What does this Chinese character mean?

Solution:  The simplest way to solve this is to use the Google Translate "Handwriting Recognition" tool for Chinese.  To do this, visit:  Translate.Google.com and select Chinese as the input language. 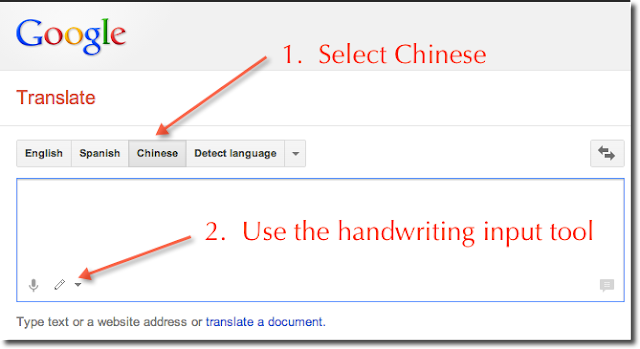 Then, using your best approximation to the character, draw it in the pop-up text input region.   Here's the place where you'd write in the text you're seeking: 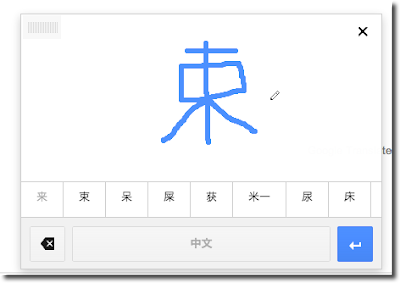 Then, select the correct character (the second one from the left):

... and see the answer on the right.  In this case,  the English word, bundle.

Notice that below (and to the right) Google provides a bit of usage information: 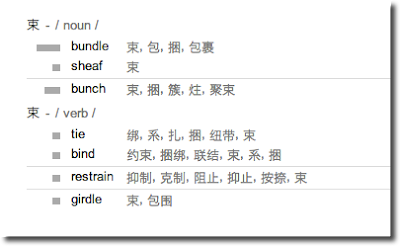 The bars indicate roughly how common that usage is ("bundle" is much more common than "sheaf" and slightly more than "bunch").

NOW... since you have the character, you can drop it back into Google (copy/paste) and see what other kinds of context information you can learn. 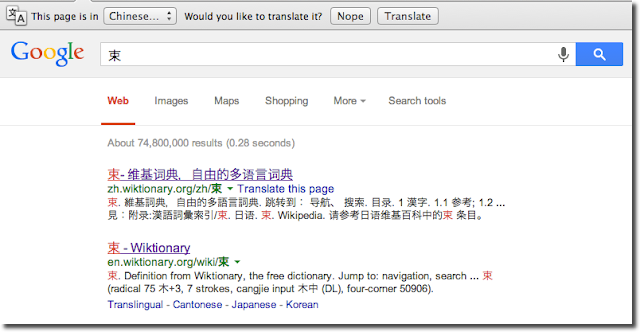 Here I see the Wikitionary entry about this character.  Click through to that resource to find that it also has a meaning of "to bundle together" or "to bale up."

Fascinating:  It is also a character used in Japanese to mean "large bundles" or it can act as a counter for bundles of things.  (Along the lines of "1 carton of eggs, "2 cartons of eggs..." etc. Japanese adds in additional "counter" terms to indicate the kind of thing being counted.  For more information on this fascinating linguistic concept, see the Wikipedia article on counters in Japanese.)

2.  What does this <unknown language> character mean?

To figure this out, I did Search-by-Image to identify it as a Korean language (Hangul) character.  Don't be fooled by all the appearances of Japanese in the result set.  If you click through, you'll see they all connect to Korean!
Then, I did the same "draw the character" trick from above, but used Korean as the search language. (Chinese and Korean writers, please forgive my terrible calligraphy.  I'm writing this with my finger on my Mac's trackpad in the write-in region provided, while sitting on the floor at the EduCause conference.  Not the best of tools and circumstances!)

As Remmij and Ramon pointed out, this Handwriting input method is covered in a Help Center article.

And yes, it does mean "End."  (And no, there's no implication to draw from this.  It's just a handy example of a character I happened to see in real life...)

Search lesson:  This is another form of the "I bet there's a tool that does this..." heuristic.   This one has been around for a while now. You might have even seen it in the Translate UI before, but never had the chance to explore.  Now you do!
So... when is this REALLY applicable?  It's not a super-common use case, I admit.  But there are times when you'll see something like this and a recognition tool is the only way to go.
Question for everyone to think about:  While this is a reco-tool for handwriting in various languages.  What OTHER kinds of recognition tools do you know about and/or use?
I can think of a couple off the top of my head:  SoundHound or Shazam for recognizing music.  What else is out there?
Let us know by posting into the comments!