Answer: How did traffic signs come to be? 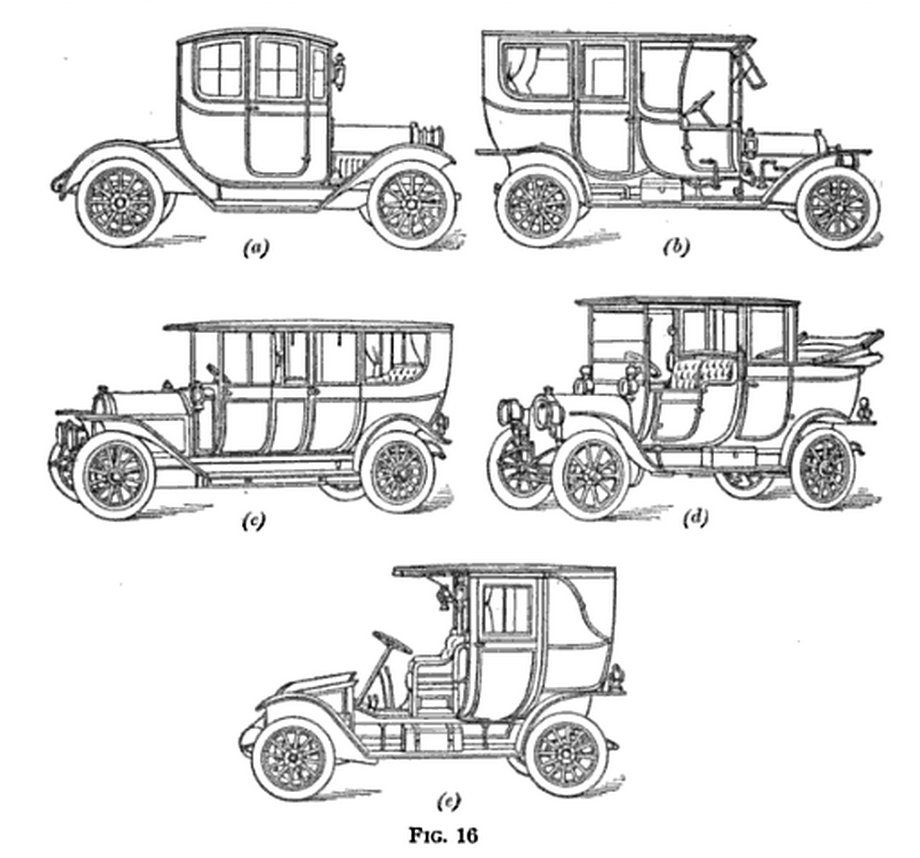 As you recall, a while back, a reader asked the question:


This is a fun research Challenge--partly because it's interesting to see ALL of the different stories that are out there about traffic lights, but also because there are some key Search Lessons we have to remember to do this one well.

As Rosemary, Ramón, Remmij, Debbie, Anne,  and Jon point out in their comments, these things were invented quite a while ago--it's very likely that the names would have changed over time. 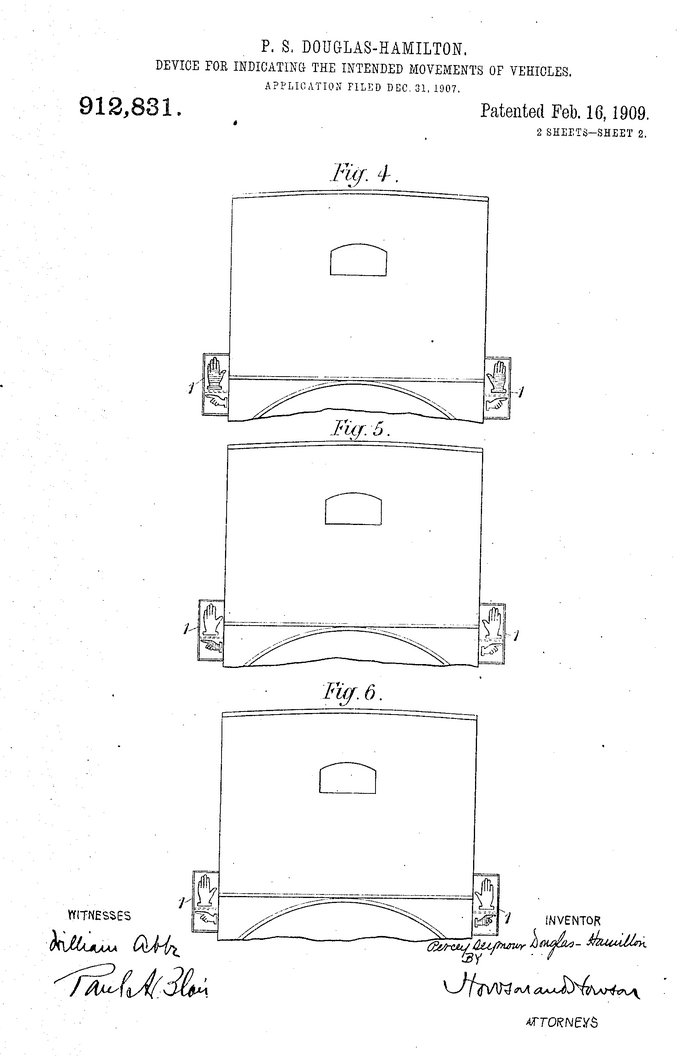 which took me to the "Second Chance Garage" site and their story about turn signals (along with many of you, apparently).   In there, we learn that in 1909, a British man named Percy Douglas-Hamilton took out a patent on a "Device for indicating the intended movements of vehicles."  A quick Google Patent Search (that's a link to the Advanced Patent Search page) on his name gives us US patent #912831.  (incidentally, Percy Seymour Douglas-Hamilton lived at 6 Queen's Gate Gardens, London, at the time of the patent.)

As you can see from the illustrations in the patent, the signals were in the shapes of hands.  The upheld hand would light up to indicate stopping, and the hands that point left and right would be back-illuminated to indicate a turn in that direction.  In reading the patent, it's clear that there would have been at least 3 different switches for the driver to use (one for stopping, one for each direction).  The lights would not have blinked. 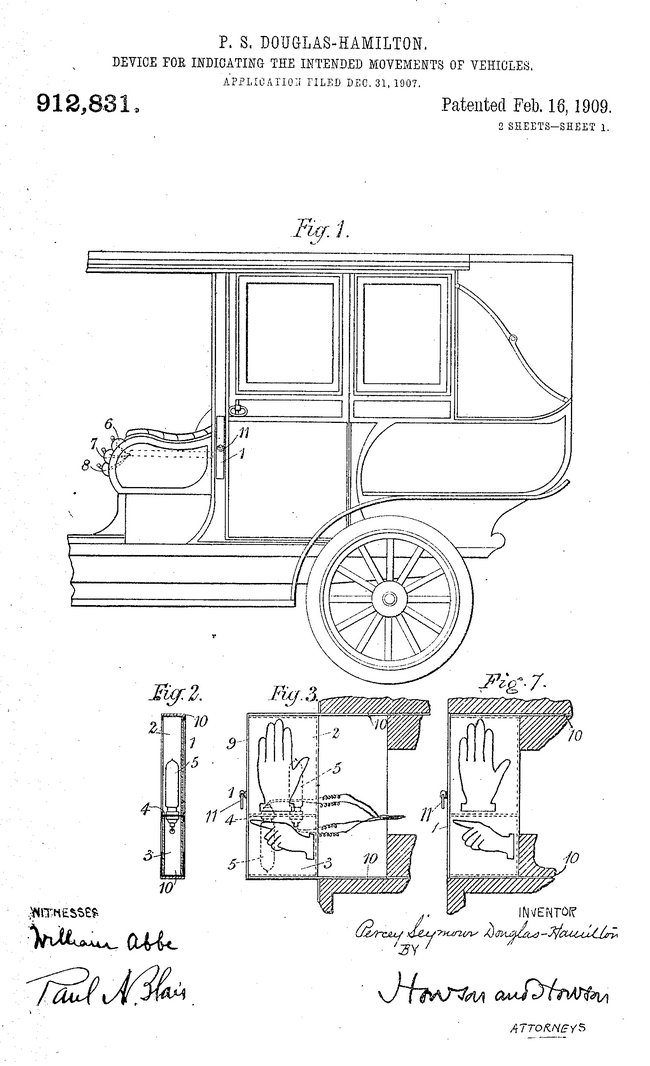 Continuing our search for the history of turn signals, I poked around the search results for a while, finding all kinds of interesting tidbits.  Including this piece from the New York Times ("Who made that turn signal?" July 12, 2013) that covers a number of signal introductions, and the relatively long amount of time it took for them to be adopted.  To quote from that article:  "Actress Florence Lawrence...developed an early version of the turn signal. “I have invented an ‘auto-signaling arm,’ which, when placed on the back of the fender, can be raised or lowered by electrical push buttons...”  But it didn't catch on, nor did the other inventions.

Since this was so long ago, it's very likely that the terminology changed between now and then, so I did a quick Wikipedia search for:

and found that there was an Italian system of "trafficators" that dates back to 1908.

"They [trafficators] first appeared in the 1900s, when they were actuated either mechanically or pneumatically. In 1908, Alfredo Barrachini in Rome had added electric lights inside the arms, that turned on as they extended, but operation was still by a cable system. Electric operation came in 1918 when the Naillik Motor Signal Company of Boston added electric motor drive."

So the consensus seems to be that the inventions date to 1908, becoming more-or-less standard in the 1930s, with Buick introducing factory-installed turn signals (as opposed to after-market kits, which had been around for a while).


Let's turn our attention to traffic lights:  When did THEY become a common thing?


leads us to the Wikipedia article on the History of Traffic Lights.  The story told there is long and interesting, but the critical point is that on December 10, 1868, a semaphore system was put in place at the junction of Great George and Bridge Street in London, near Parliament.  Downtown London had so much horse and wagon traffic that a British railroad signal engineer designed the first traffic semaphore to regulate traffic movement. The device was the first traffic “light”, as lenses in the semaphores where lighted by gas lanterns at night.

Armed with this information, I did a few queries:

and found lots of other evidence to support this origin story.  One of the more interesting documents is from the Transportation Association of Canada annual conference, which tells this same story (and is a pretty reputable source).

These sources also repeat the story of this first gas-powered traffic signal blowing up, injuring the policeman-operator.

But for traffic signals as we commonly think of them today, I did a query for:

which led to several sources for the origin of the four-way, three-color traffic lighting system.  The red/yellow/green colors were used in the railway system of the day, and in 1920 in Detroit Michigan policeman  William L. Potts lighting scheme. As a consequence, Detroit became the first to use the red, green, and yellow lights to control road traffic.   See:  The Origin of the Green, Yellow, and Red Color Scheme for Traffic Lights  and the Wikipedia article above.    Traffic Lights Invented by William L. Potts  And for years afterwards, there was a period of great experimentation, including signals that copied some of the iconography seen on car turn signals as well.

Search Lessons:  As I said, this wasn't a hard search problem (but it was extraordinarily interesting--I spent way too much time reading everyone's comments and clicking on all of the links.. .thanks!)

But there are three lessons I want to point out today:


1.  Wikipedia is a great place to start your research, but don't end there.  You know that (in general) the quality of the articles on Wikipedia is quite good.  But you should ALWAYS second source what you discover--especially when it's difficult, or unbelievable.  Be sure to avoid duplicative text--that is, whenever you see a word-for-word copy from the Wikipedia article, you can't really count that duplicate as an independent source.

2.  Patent search is a great place to look for the start of a technology, but not its adoption.  There are many, many patents for technologies that began at one time, but then took decades to finally be adopted.  But that doesn't stop you from searching the Patents and discovering who did what, and what companies were involved.  You can often discover key players by looking at the patents.

3.  When doing historical research, be very aware of the terms people used to describe things.  Remember the "trafficator" from above?  As you read through older documents, keep a sharp eye open for specific terms and phrases.  "Semaphore" and "signaling systems" kept coming up in my searches.

A footnote:  One things that did NOT work for me (although I spent about 2 hours trying) is Book search.  I'm not sure why, but I just was not able to find a decent history of cars / automobiles that included any kind of discussion of the evolution of turn signals.  I tried "directional indicator" (and variations of that phrase, since that's the "classic" term used), but it just didn't work out.

Did anyone else have success finding something in a book on this topic?