There's a tradeoff between making...

the search challenges easy (but interesting), and difficult (but challenging/fun in a different way).

Luckily, everyone seemed to enjoy this Challenge.  There certainly was a bunch of discussion about it!

The Challenge questions this week were:


1.  What fountain is this?  Where is it located?  And who was the sculptor?

2.  Can you identify the other, more famous statue by this sculptor, and tell me what color was it when it was made?

3.  Can you find any other copies of this other, more famous statue?  Where are they located?

Most everyone figured it out easily, although several people had "special knowledge"  Cynthia wrote: "I added Washington DC since I thought the building in the background was the Library of Congress..."  It wasn't the Library, but the building architecture is in the federal style, so it was a very reasonable guess.  (And the fountain ends up being just a couple of blocks from the LoC.)

When I tried to solve this, I ended up cropping the original image from this: 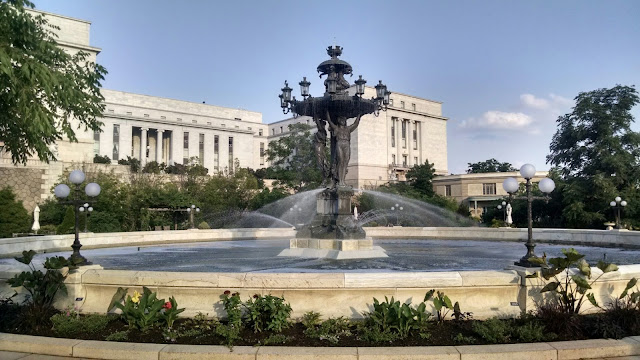 to this.   Cropped image: 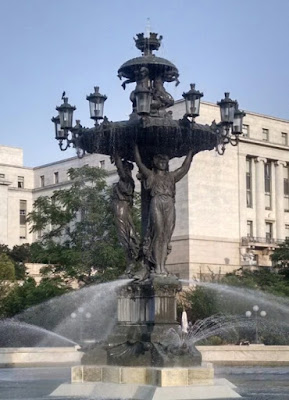 And then, when I run the Search-by-Image query, this time I get: 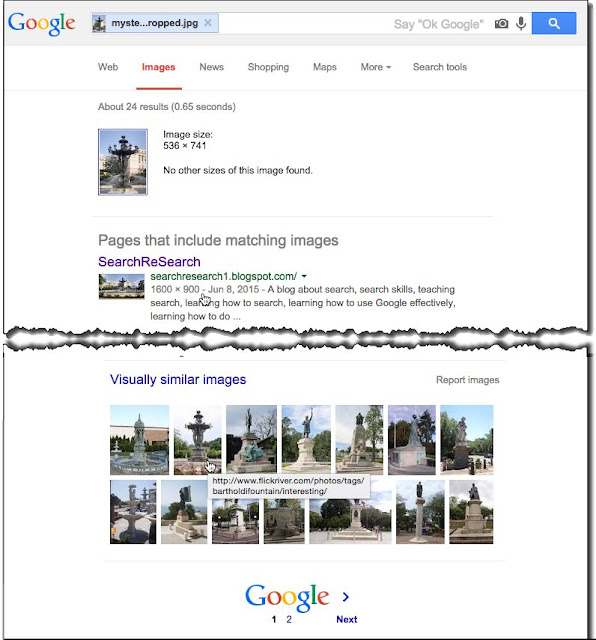 Look at the popup on the hover (next to the hand cursor--second image from the left, first row of "visually similar images").  If you click on that image, you'll find the fountain identified as the Bartholdi Fountain.  A quick check on that name leads to a very nice Knowledge Panel that confirms this was created by Frédéric Auguste Bartholdi.

Oh, btw, the Google Map also tells you where it is, rather close to the Capitol building. 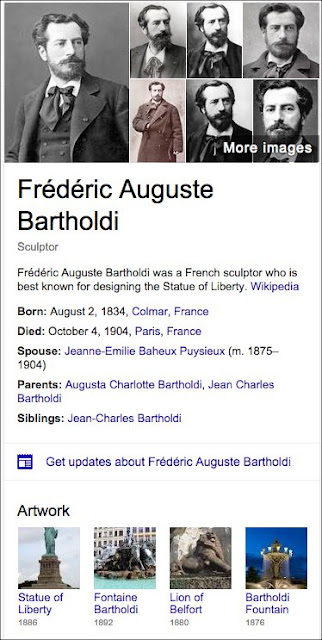 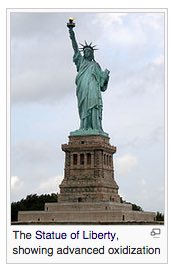 By the way, this also points out some of his other works--the Lion of Belfort, and the very famous Statue of Liberty.

To figure out the color, I did the same query as Ramón:

and quickly found several articles that pointed out the statue's skin is made of copper, which is why it is NOW a green (aka verdigris) color. Interestingly, the example of great verdigris as given in the Wikipedia article is the Statue of Liberty.

So, obviously, the Statue of Liberty was originally copper-colored.

Any other copies of the Statue of Liberty?

I originally started to answer this by looking up other copies that I knew about (e.g., the one in Las Vegas, and I knew there was one in Paris).  I was surprised, though, when I looked it up to learn there are TWO copies in Paris.

took me to Wikimapia, which shows the two in Paris.  The comments there point out a THIRD in Paris at Musée des Arts et Métiers.

It's a simple search tactic, but one well worth remembering.


1.  When you're searching for a complete list of things, try searching for the list of things.  I know this sounds dumb and obvious, but it took me a few minutes to remember this.  This is especially true when you're looking for all of the instances of a kind of thing... and you don't think such a list would exist.  Possibly my favorite "unexpected list" is this list of octopus species.  Really?  Yes, Wikipedia never ceases to amaze.

2.  Remember to crop the image down to just the most salient bit.  The Search-By-Image algorithm works best when it's matching just the part that you care about.  Or, to put it another way, the part that many other people have already photographed.  In this case, since the background is so variable (depending on camera angle), cropping to JUST the fountain is a great trick to remember.

3.  Check the Knowledge Panels for relevant information.  They're constructed with a collection of commonly-requested facts about the entity in question (in this case, either the Bartholdi Fountain, or Bartholdi himself).

Thanks for searching.  Our next Challenge will be on Wednesday of this week!