Answer: A couple of odd questions


From the Cronkite Journalism School in Phoenix...

... I'm writing this is one of the classrooms before giving my talk about "Deep Search," which is pretty much what the topic of SearchResearch is all about.  It's a fascinating time to reflect on the connections between what we talk about here, and what I think people need to know to be effective searchers.  More on this later...


1.  This wallpaper showed up recently on my Android device; I was struck by how beautiful it is.  Can you figure out where this in on our planet?  What's the lat/long?  (There's no metadata here, I already checked.) 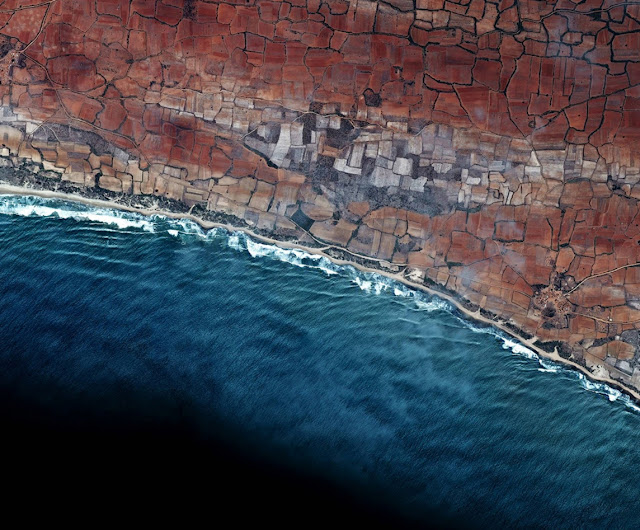 First of all, excellent SearchResearch skills by the team!  You collectively solved it in less than 24 hours.  This was a pretty difficult challenge, so I'm very impressed.

As I mentioned, I saw this first as wallpaper on my Android device.  As it turns out, I asked a fellow Googler about this, and he took the Challenge and found it pretty quickly!  Impressed, I asked him how he did it.  He wrote back to say:

I manually searched on Google Earth.  I was able to make some assumptions about where to look from details in the original image, but then I basically followed a hierarchical linear search of likely coastlines.  I was able to cover most of Africa in a few minutes by zooming in and out along the coastline and skipping obvious jungles, deserts, and mountains.

When it wasn't there, I considered other possibilities and rapidly discarded them (the non-straight, unpaved roads and irregular field shapes really rules out places that have the right potential geography but are even moderately affluent, like parts of South America or Australia -- the roads are all straight along the coast if the ground is flat, and the fields are quite regular).

That left very few possibilities (basically just Madagascar once you recognize that most other places that are likely to have that kind of roads in flat areas are all jungles).  In all, it took less than 10 minutes (describing the process in this email was slower).

In other words, he recognized that the image has certain properties: it's got a characteristic field layout, the coast runs roughly NW-to-SE (at around -30 degrees), and that it's clearly in the 3rd world.  By quickly scanning plausible places (in the tropics) at a 30,000 foot elevation (or 10 km height), he was able to spot the characteristic reddish color and the angle of the coastline.

Interestingly, I didn't really believe him about this, so I started looking around with Google Earth as well, and much to my surprise, I too was able to find it with not-quite-manual search, but informed searches of our planet.

I estimated the size of the photo as being about 3 miles across, so I wanted to start scanning in roughly 3 mile chunks of coastline that was largely red, rural, and trending NW-to-SE.

I know the world is a big place, but if you look at Africa (this is from Google Maps in Earth view mode), you'll see that there actually aren't that many places to look that will match this description: 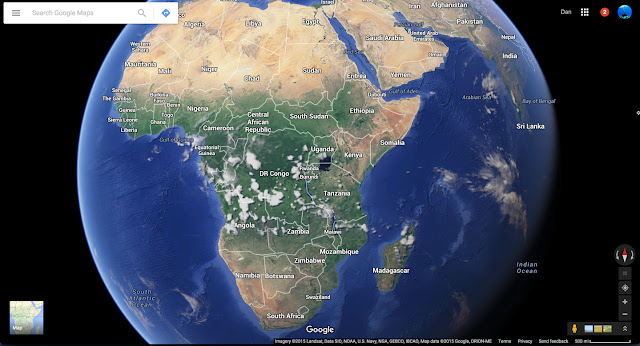 Only portions of South Africa, Nigeria, and Madagascar look plausible.  A quick check of those places shows that only Madagascar makes any kind of sense.  Now you could say, "wait a second, there's a LOT more to the world than this!"  But keep in mind you only need to check from pretty far up--you can literally skim the maps at a high "altitude" -- like this: 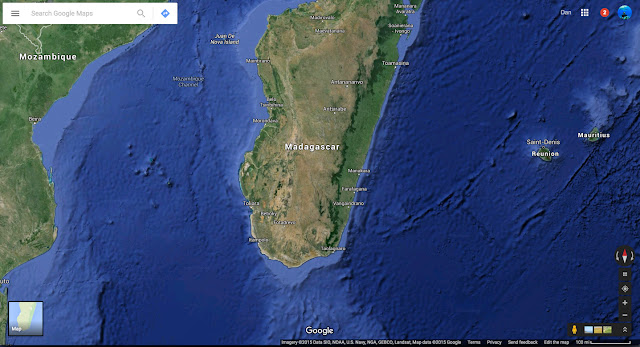 At this height, we can look at very large swathes of continents for plausible places.  It's clear only the southern end of Madagascar is plausible. If you zoom in a bit more: 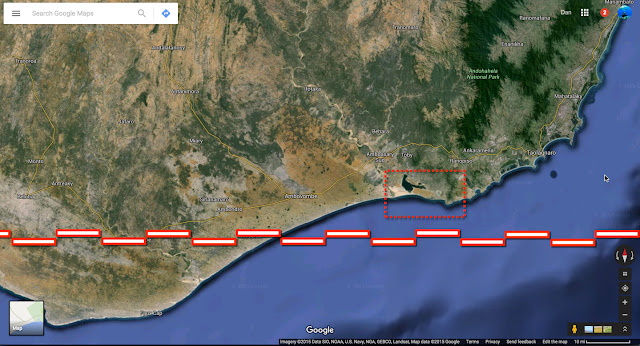 Here I added the dashed rectangle to show a plausible region on the coast, and the red/white bars to indicate 10-mile segments.  As this altitude, you can scan around 145 miles of coastline in a couple of seconds.  It doesn't take long to look at only the coastlines that are at the correct angles (and land color).  This is 145 mile wide section, only the part in the box makes any sense to zoom in.  And when you do, this is what you see: 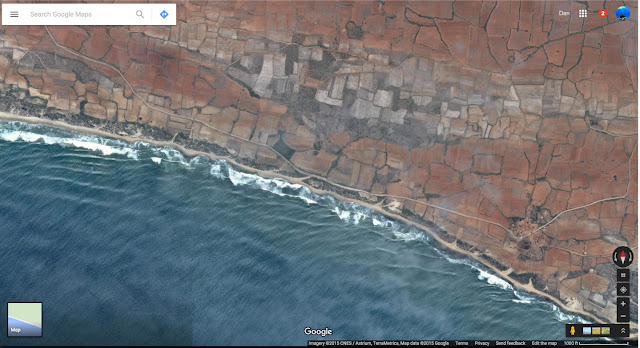 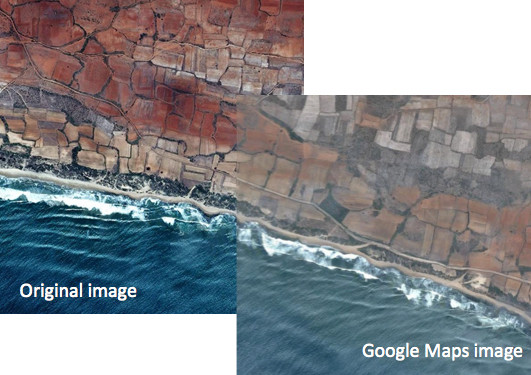 2.  Some animals have the ability to grow body parts back when they lose them. Some lizards, for instance, can regrow a lost tail; some salamanders can grow back a leg.  But SOME animals don't grow the missing body part back, but reorganize their body plan.  What's this process called?  What kind of animal can do this?

I didn't realize this would be quite so easy.  The obvious query:

gives an article about symmetrization, which is the ability of some animals (such as jellyfish) to regrow body parts that have been lost (either through natural causes, like a turtle bite, OR a biologist cutting off bits).  A paper describing this process (and from which the photo below is taken) is Self-repairing symmetry in jellyfish through mechanically driven reorganization.
(M. Abrams, et al., Proc. National Academy of Sciences, vol. 112 no. 26, doi: 10.1073/pnas.1502497112)

The trick here is that unlike salamanders , which can regrow amputated limbs, the jellyfish has to regrow a LOT of its body, which means continually reorganization.  Impressive.  Wish I could do that.


3.  I ran across this great word Mbaqanga, and I know it refers to a particular kind of music.  But WHAT kind of music is this?  And... how in the heck do you pronounce that word?

It's pretty easy to figure out that mbaqanga is a kind of African music, specifically, it's a South African dance music that combines traditional elements (as chanting and drumming) with elements of modern music (such as jazz and rock).  A quick search on YouTube shows us the Mbaqanga song by Mahlathini & The Mahotella Queens (1991).  At 1:54 in this video, you'll hear her say, "... they are the creators of Mbqanga..."  As you listen, notice the slight click in her voice mid-word.

Now, how can I pronounce it?  I know that both Google and Wikipedia will give pronunciation guides in IPA (International Phonetic Alphabet).  Here's what they tell us:

But notice that the Wikipedia pronunciation has an exclamation point in front of the á character.  That's the click sound, fairly common in Zulu.  (See the Wikipedia article on Click consonants.)  I don't know why it's missing in the Google pronunciation (I'll have to check on that!)

Oddly, many of the usual sources for word pronunciations (Forvo, etc.) have suspect (or clearly incorrect) pronunciations.  Lesson:  Never trust the pronunciation of a computer-generated voice!  Even the pronunciation you can find on Merriam-Webster (and other dictionary sites) isn't acceptable.  (It seems they tried to just pronounce it from the IPA and didn't bother to ask a native speaker!)

But Luís found a fantastic Mbaqanga video which has the musicians talking about this particular kind of music... and pronouncing the word very clearly.  You can REALLY hear the mid-word click in this video.

1. Manual search sometimes works, even when you don't think it will.  I have to admit that I was surprised by the idea that you could manually scan all of the relevants parts of coastlines worldwide.  The key insight was that by looking for only specific kinds of large patches of coastline, it became a manageable process.  This is worth remembering.

2. As usual, it's worth checking multiple sources for consistency, and validating those against ground truth.  In this example, the pronunciation of a word like Mbaqanga can be tricky.  Here we found two different versions of the pronunciations (and many of the YouTube videos are inconsistent), so it's good to find someone speaking who has ground truth validity.  (e.g., the Zulu singers or jazz musicians who say the word in natural context).

As usual, I learned something in the process.  Hope you had a good time!