Answer: When & whither these buildings?

It's not often that as you walk the street, you run into a few buildings that seem as though they fell out of a Streamline Moderne fantasy.  This was an architectural style that was from the 1930s, with swooping curves, long lines, and curved angles, a kind of Art Deco whimsy that influenced everything from building architecture to cars and toaster design.
I've long been fascinated by how and why such things emerge onto our landscape, so I thought I'd look these particular pieces up.. 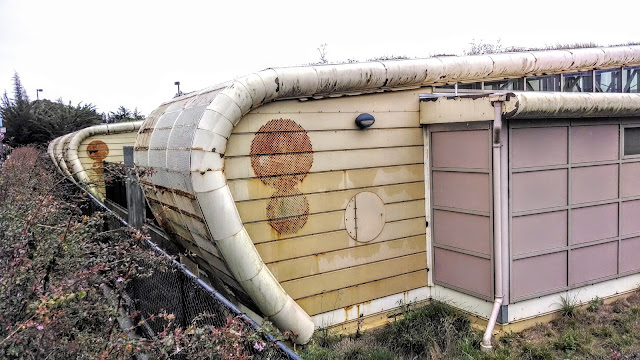 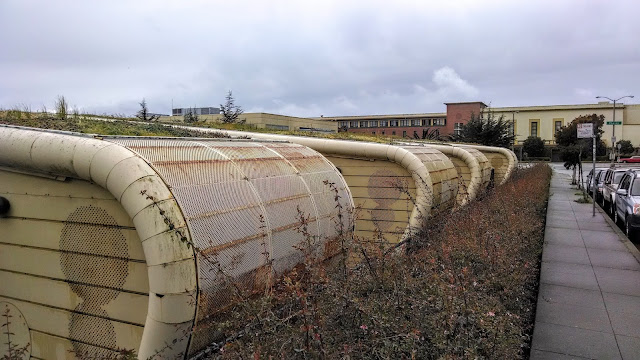 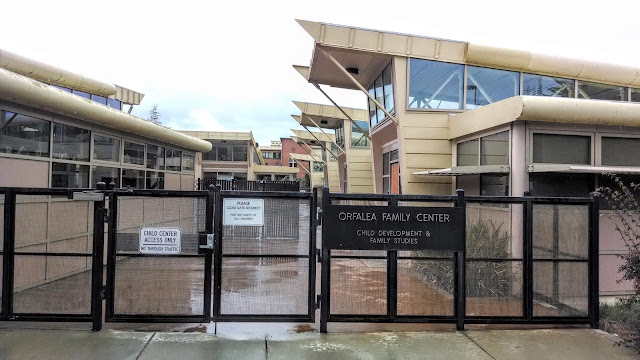 And that curiosity led to the research Challenges for you:

1.  When were these buildings constructed?  Are they, in fact, from the era of Streamline Moderne?

I wanted a bit of background, and so my first search was for:

which led to a bunch of deadends (information about the center, maps of their location, etc.).  But it ALSO led me to an interesting article in The Guardsman about "Child Care Buildings Shouldn't Be Rusting" at the Orfalea Center.

Before I read to much farther, I first did the obvious search about The Guardsman--what kind of publication is that?  A couple clicks on their website led me to find out that it's the newspaper for CCSF.  They  the newspaper publication for City College of San Francisco. Since the college has over 100,000 students, they're a pretty good size newspaper!

In that article, there's a line about the buildings being "less than six years old..."  THAT surprised me.  I thought they were Moderne, and given how rusty and generally beat-up they look, it didn't seem possible that they could be from 2008, yet that's what the article claimed.

Regular Reader Paola R found a Google Book, City College of San Francisco, with some images of the Center when it was new.  Her query (in Books) was for [ Oralea Family Center San Francisco] and shows us that the place looked like this when new: 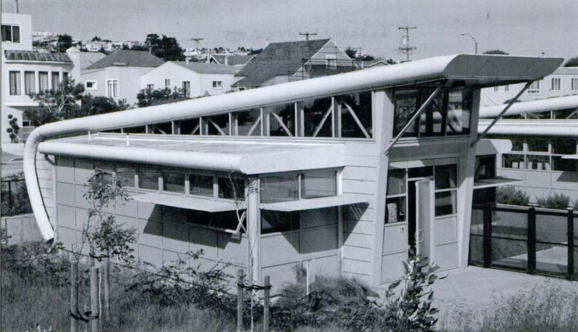 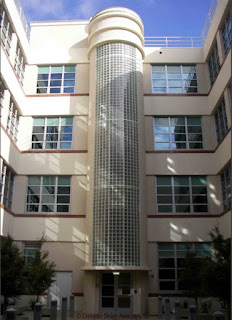 The book also highlights a mural by Peter VandenBerge (albeit done in ceramics) that was originally located in the south end of the Reading Room on the campus library in Cloud Hall  before being moved to the Family Center in 2008.  (This is really interesting, as I didn't know that this mural was there.  Read on!)

Following a different strategy, Regular Reader Judith did a search for  [ CCSF Streamline Moderne ] and found that there IS a building on campus in that style (Mission Campus’s 110 Bartlett Building, was originally the Samuel Gompers Trade School, constructed in 1937)... That's excellent, but it's just not these buildings.

2.  What's the controversy around these buildings?

You can get a sense for the controversy from the article above.  Buildings constructed in 2008 shouldn't be falling apart.  As a consequence, there's an active investigation going on (still, apparently) about who's at fault.  The architects?  The builders?  What's going on?

The Guardsman article mentions a company, Project Frog, that Regular Reader Remijj looked up with the query, [ Project Frog ], leading to their home page, and an article in Forbes that tells us they started as a business in 2006, which would have made this one of their very first projects. Project Frog specializes in "snap together" or Ikea-style "flat pack" buildings that are built elsewhere, then "snapped together" on the project site.

That gives them a construction advantage, but something seems to have gone wrong in the Orfalea Center.  To see how bad it's gotten, I just did a quick query  [ Project Frog lawsuit CCSF ], hoping I'd find something, and I did.  In their May 14, 2015 edition, The Guardsman reports on the lawsuit that's been filed against the Indiana-based construction contractors Hunt Construction Group, and will go to trial, in June 2016.

Interesting factoid picked up along the way:  I also did a quick Wikipedia search for:

because I'd never heard of such a name before, and was just curious.  I discovered that Paul Orfalea (Arabic: بول أورفاليا‎), was nicknamed "Kinko" because of his curly red hair, and founded the copy-chain Kinko's when he was a student at UC Santa Barbara.  Ah.. THAT's where the money comes from!


3.  As I kept walking in this neighborhood, near this building cluster I accidentally discovered a mural by a very famous muralist.  (Seeing it was one of those shocking moments:  That's HERE?? You're kidding!)   What is the name of the nearby mural?  Who painted it? And how far is it from these buildings?

As we saw above, the book about CCSF tells us about a mural of Peter VandenBerge that's at the center.  Fascinating, as I didn't know it was there.

So when I did my search, I focused on using CCSF as a search term, figuring that it would be the obvious entity that could hold a world-famous mural.  My search was:

And the first hit is for the Pan American Unity Mural by Diego Rivera. The web page is by the college, so it's probably reliable.

The mural is at 50 Phelan Avenue, and housed in the Rivera Theatre on campus.  Looking at the map, you can see it's about 200 feet from the Child Center to the theatre.


To find the nearby sculpture, I did a very simple query that links the two concepts together: 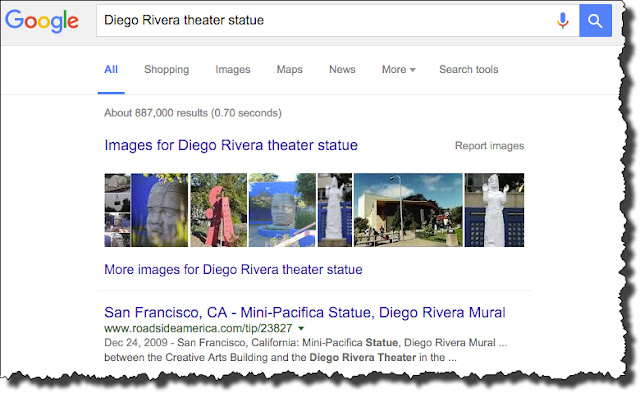 You can see that there's a Mayan head, but also a statue of "Pacifica."  A quick search on:

quickly confirms that Pacifica is a statue created by Ralph Stackpole for the 1939–1940 Golden Gate International Exposition held on Treasure Island in the San Francisco Bay. It was Stackpole's largest sculpture.  At 81 feet (25 m), it towered over the entrance to the Cavalcade of the Golden West in the Court of Pacifica.

Since this version is in a campus garden, and stands only 15 feet high, it's clearly a replica.

In case you ever visit, the campus is fairly full of interesting sculpture.  Here's a guide to CCSF statuary, including Pacifica.

1. Use what you've got.  In this case, I gave you the lat/long, and you could read the name of the Orfalea Family Center in the 3rd image, so finding the location (and then verifying with StreetView) was pretty easy.  Then, with an unusual name like "Orfalea" as a search term, the rest was pretty simple.  Finding the college newspaper (the Guardsman) was a stroke of luck, although whenever you're searching for campus news, most colleges have some kind of online presence, and that's a useful thing.

2.  Check other resources.  Paola R was smart to look in Google Books and found a picture of the center before it turned somewhat crufty.

Likewise, checking out YouTube with the query [ Diego Rivera mural CCSF ] leads to a couple of interesting videos, including this fascinating cellphone video panning across the mural.  It gives a great sense for how big, colorful, and beautiful it is.

3. Try linking concepts together to get exactly what you seek.  In the query  [ Diego Rivera theatre statue ], I put together two distinctive concepts (the mural and the statue) that I figured would get me to the statue of Pacific near the mural.  This works because people often write about things-near-other-things: If you're going to write about the mural, you might want to mention that gorgeous statue out in the courtyard.

Stay curious my friends, and when you run across some beautiful buildings that seem historic, but are in disrepair, take a second to search it out--there could be a hidden scandal there!