Answer: Questions that come up during travel...

Traveling is an endless source of questions...
This week brought the "who's on the teapot?" question (as seen on a teapot from my host's home) and a more commonplace question--"what kind of trees are those?"
As it turned out, the man on the teapot took a little sleuthing to figure out.  Identifying the trees (and where to go see them) was a piece of cake.  So let's do the tree question first, then we'll do the man on the teapot.


2.  Many of the streets here are lined with these beautiful flowering trees.  What kind of tree is this? They bloom so beautifully, are they native here? 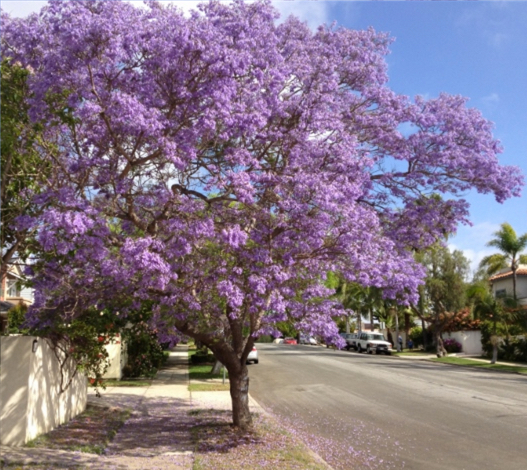 My very first query was:

which led to many pages about jacaranda trees, but the most authoritative was the San Diego botanical garden which describes jacaranda trees as "medium to large spreading tree, up to 40-50’ tall and 40-50’ wide.."  and "Jacarandas are among the world’s most spectacular flowering trees with lavender blue, tubular blooms in late spring and early summer. The ferny, compound leaves provide fine-textured shade during the warmer months."

(Love that phrase:  "fine-textured shade"!)  Yes, it is shady under a jacaranda tree, but it is made of "ferny compound leaves" that let some fraction of the sunshine through.

And they are spectacular.  Many places have planted these as showy trees along avenues and boulevards (even though they're quite messy as the blossoms drop to the ground).  I learned that Pretoria, South Africa has quite a collection of jacarandas, planted along the streets, earning it the nickname of the "Jacaranda City."

3.  As I was landing at the San Diego airport, I could see a couple of neighborhoods that seemed completely blanketed in these trees.  Where should I go (nearby!) to see a bunch of these trees all lined up?

So I did a long question-form search (that is, I just typed out the question like this):

[ where can I see jacarandas in San Diego ]

Notice that I asked a question.  As we've discussed before, Google is becoming increasingly competent at handling plain old questions like this.  This doesn't work for ALL queries (yet), but for this kind of question--one that I suspect has many pages out there on this topic--this is a pretty safe approach.

Sure enough, the top several hits are all good results.  Interestingly, several of them link to the article "Uptown's Lavender Delight" which includes a map of good San Diego area jacaranda viewing locations.  The map points out that "Banker's Hill" (the area just west of Balboa Park) is a hot spot.  So on my last morning of my trip, I drove out there and found some.  Here's the corner of Laurel and Sixth, Banker's Hill, San Diego (Balboa Park is behind me): 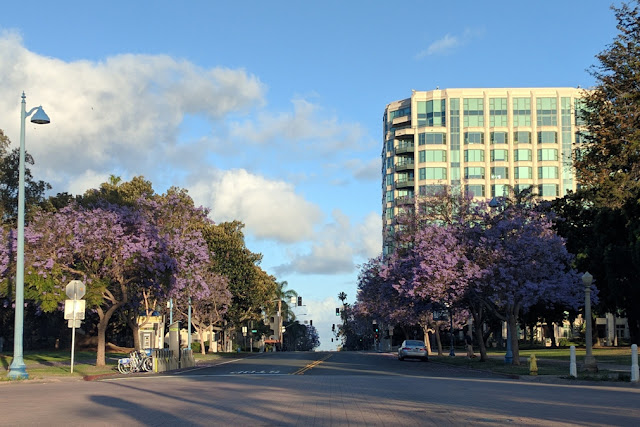 
1.  I found this teapot at the place I'm staying.  Naturally, I have NO idea who this guy is--can you help me figure it out?  FWIW, his image is also on every teacup in the place.  Who is the man, and why would someone have a tea service with his fancy hat on it? 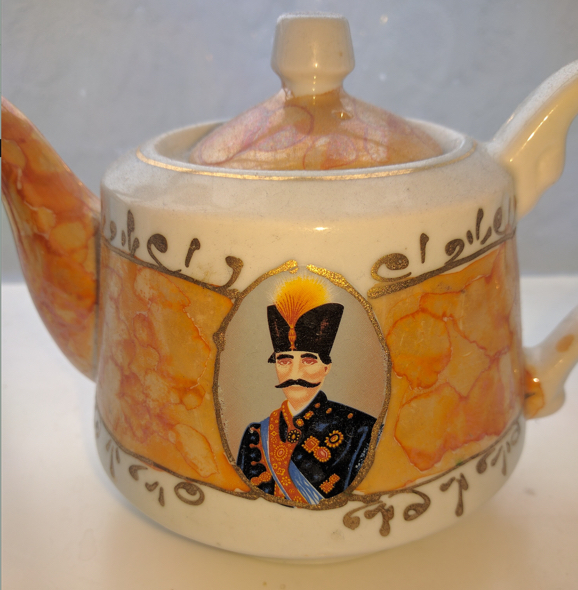 I did the obvious first step:  Search by Image.  I didn't find much of anything in the search results.  Lots of teapots, but nothing that looked like this.  (So I'm really curious how some of you had successful reverse image search.  If you have a moment, comment below and tell us the details of HOW you did the reverse image search.)

Since that didn't work for me, I cropped the image to just the mustachioed man.  I cropped it to this: 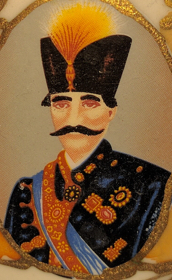 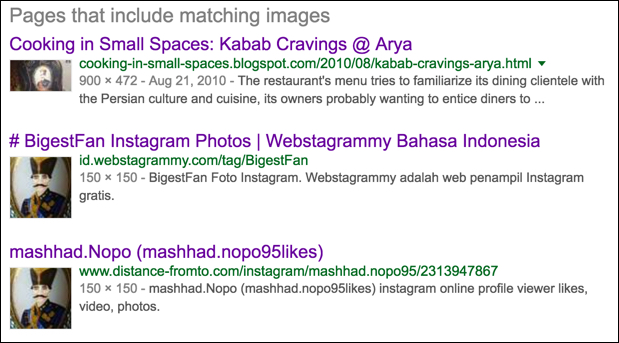 The interesting thing here is that all of the hits are for identical images (the same hat, the same mustache, the same badges... everything is identical... which makes me think this is a fairly iconic image).

The first hit ("Cooking in small spaces") is a blog post (and picture of a tea service) from a Persian restaurant. Okay.  What about the other ones?

Interesting that one image would be used by two very different bloggers.  THAT makes me suspect not only is the image iconic, but that searching for THAT particular image (that is, the one the bloggers use as their avatars) would probably be a useful step.

So I did another reverse image search on THAT avatar image.  While I found more people using that as an avatar, I didn't find the answer.

I know it's probably Persian, and probably someone who's "iconic" in that culture.  Who might that be?  A king?

I modified the query to include Persian king  (and if you know that Persian kings are also known as a shah, that term would have worked as well). 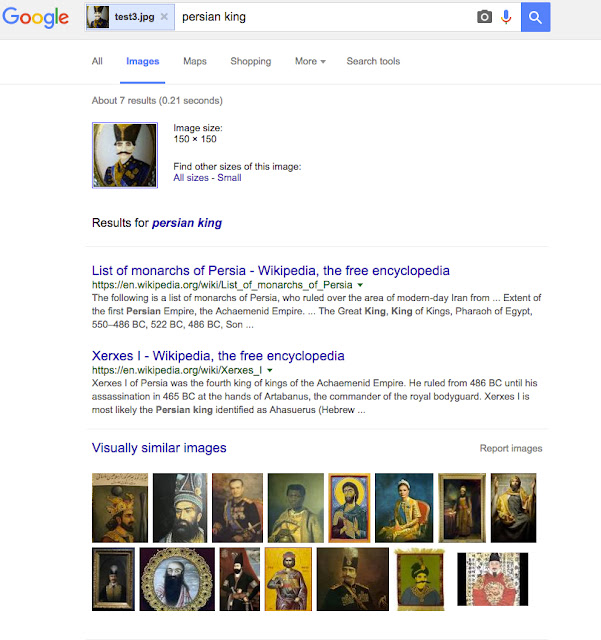 That still didn't quite answer the question, so I clicked on "Visually similar images" and got this... 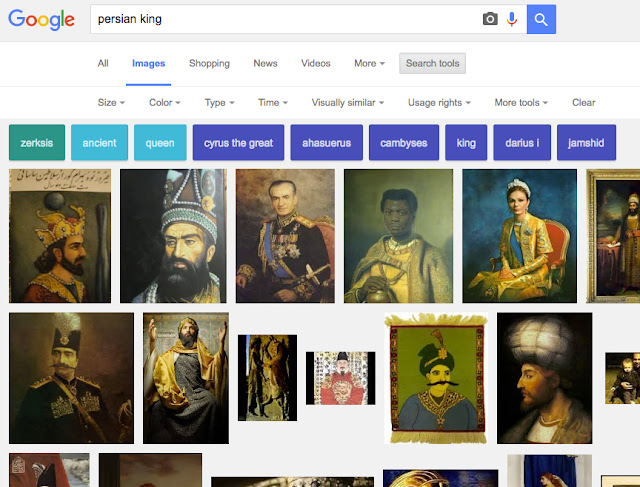 Now, looking at this collection of images, I see two that look like it might be the guy on the teapot (#1 on the left in row 2, and #5 in row 2).  If I click on the first fellow, I learn from the landing page that this is "...Nasser al-Din Shah Qajar (16 July 1831 – 1 May 1896) (Persian: ناصرالدین شاه قاجار‎),  King of Persia from 17 September 1848 to 1 May 1896 when he was assassinated. The son of Mohammad Shah Qajar and Malek Jahān Khānom and the third longest reigning monarch in Persian history after Shapur II of the Sassanid dynasty and Tahmasp I of the Safavid Dynasty. Nasser al-Din Shah had sovereign power for close to 50 years and was also the first Persian monarch to ever write and publish his diaries."

Interesting, but is he that guy on the teapot?  (There's a resemblance here, but I want to verify it.)

So my verification query is (in Google Images):

(note that it was spell corrected to Naser al-Din Shah Qajar).

That seems pretty right on.  (But who are the two women in image 5?  Answer: They're women in Qajar's harem.)

And of course, I did an image search just for

and it's pretty clear that this is the same guy on the teapot.  (In fact, that second photo looks like the one that was the original inspiration for the teapot painting.)

He was a fascinating fellow, no question. The shah of Persia, with a harem of at least 100 women (including his favorite wife, Anis al-Doleh).  It was a different time, a different culture, and a different standard of beauty. 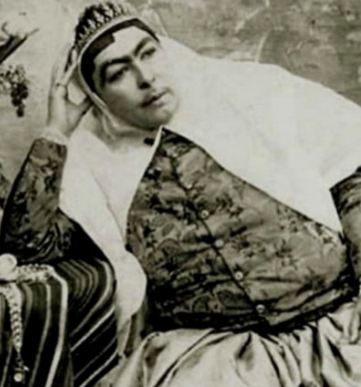 I could go on, but it's fun if you look up more about this really interesting period in Persia's history for yourself.  (Go ahead!)

For the record, I did ask my host what the story was with the teapot.  She told me it was a "behesht" teapot.  When I look that up:

you'll find lots of Iranian / Persian restaurants by that name AND lots of pictures like this: 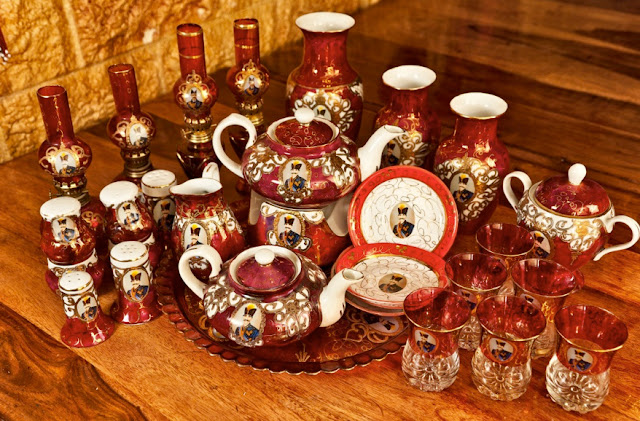 
The big lesson here is that:

1.  Sometimes you need to track down multiple paths to find an answer.  In this case, I tried reverse image search (which didn't really work well), then used a cropped image and found several bloggers using the image as their avatar.  By augmenting the image search with a guess about the role of the person ("Persian king") I was able to find a link to the man himself... and all of his wives.

2.  Remember to crop your image when the full image search doesn't work.  If you focus the image, it usually works to be more like what other people have used as their image.

3.  When you have an obvious question, try asking it in plain language.  It sometimes works remarkably well.


This was fairly tricky, but several people were able to figure it out.  (And to KUDOS to those who figured out that the Arabic writing around the perimeter means. Impressive work.)