Answer: Where's the ship in the pic?

A photo can have lots of information in (and around) it, if only you seek beyond the surface...

In last week's Challenge I asked "where's the ship in this pic?" and for some information about it.

In particular the questions were:

1. In the above photo, where's the ship?  More specifically, what's the name of the ship?

2. Were other ships made of concrete by the same outfit that made this ship?  If so, what are their names and where are they now?

3.  I DO know that this area is popular with sharks.  What kind of sharks would be here?  Any recent sightings?  (I ask because I was thinking about going for a quick dive here.  Should I?)

4.  (Extra credit)  Not only are sharks somewhere nearby now, but apparently they've been in this area for a loong time.  What evidence can you find that sharks have been near here for a long time?

To start with, I did the obvious thing and clicked on the original photo link, then zoomed in a bit just to do a bit of visual hunting in the image.  That quickly showed me where the ship is in the above image: 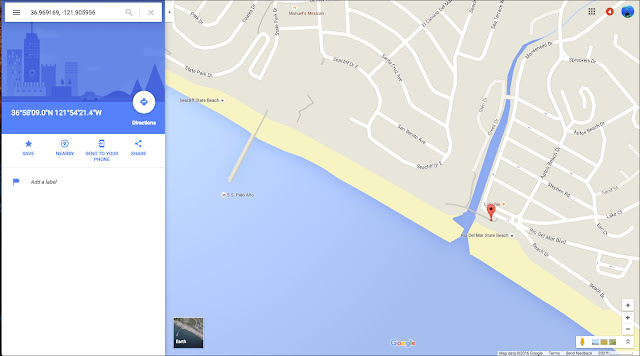 The red map pin is the location where I stood to take the photo.  If you go to StreetView at this place, and then rotate until you've closely aligned the image, you see:

Note that the compass needle is pointing directly to the right.  That means north is to the right, and that this photo is looking due west.
If you refer back to the map image above, you can see that the SS Palo Alto seems to be moored at the end of that long pier, directly west of where the photo was taken.
If you now click on the blue link "S.S. Palo Alto" you'll get more information about that ship: 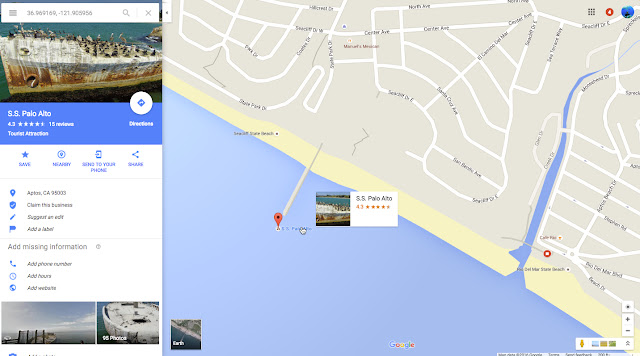 Including a link on the bottom of the panel to "95 Photos."  Clicking on that gives you a wealth of information, including the observation that this is clearly (another) ship wreck.
As we've learned before, other resources can be useful in these searches, including the ever-popular Wikimapia.  When you enter the lat/long to Wikimapia, this is what you see: 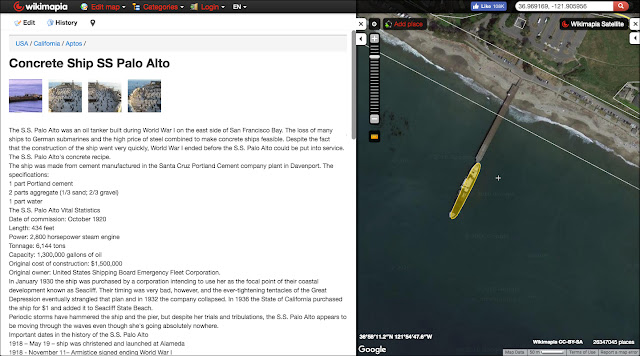 Well.. THIS is fascinating.  But how reliable is the information given in the left panel?

It's odd because the reference for this information is given as the Wikipedia article about the SS Palo Alto, but most of this information doesn't appear in the Wiki article.  The Wikipedia entry is nice, but it's not nearly as detailed as that info given here. What's going on?

Since the Wiki article wasn't giving me this information, where did it come from?

To find out, I selected a phrase from the Wikimapia text that I thought would be pretty rare (also called "low frequency").  I chose the phrase "The S.S. Palo Alto's concrete recipe" and did a search like this:

and found that it comes from Sandy Lyman's "Central Coast Secrets" web site.  Okay, so who is Sandy Lyman?

if you read to the bottom of that web page, you'll learn that the information on this page comes from the book Forever Facing South: The Story of the S.S. Palo Alto, (published in 1991 by David W. Heron).  That sounds like a great resource... and then I noticed that the forward to that book was written by Sandy Lyman!  (Searching for Sandy's bio page tells me that he's been a news weatherman, a high school teacher, and on the faculty at Cabrillo College, not far from the S.S. Palo Alto. He's a local historian of the Central Coast of California.)

Unfortunately, I can't find an online version of this book.  (It's not in Google Books, and it's not searchable in Amazon or Hathi Trust.)

On the other hand, by searching for the book title, I DID find an article in a local newspaper that drew upon this book as a resource.

"The ship was towed to Seacliff State Beach in 1930, 11 years after it was built. And for two short glorious years, it was a party boat, complete with swimming pool, dance floor and café. In 1932, in the teeth of the Great Depression, winter storms did their damage to the ship, rupturing the hull, and the company operating it went belly up.

Eventually, the front half of the ship was again made accessible, after the state of California purchased it for $1, according to David W. Heron's book on the Cement Ship, "Forever Facing South." But conditions deteriorated enough to close the ship entirely to the public in the late 1950s.

In the 1980s, said John Hibble, the director of the Aptos History Museum, a local effort spearheaded by local resident Rose Costa resulted in a refurbishing on the ship, with asphalt structural reinforcement and hand rails, allowing people to again venture out onto the front half of the boat. Several years later, after more damage, the ship was closed for good."

In the process of reading the background on the S.S. Palo Alto, I learned that the ship was made by the San Francisco Shipbuilding Company in Alameda, CA (part of the larger Oakland port area).  In looking for information about this company, I found that there were several ships made of concrete by this company--including the S.S. Peralta, also made by the SF Shipbuilding Company.

which led me to ConcreteShips.org, which has a great compilation of the concrete ships built.  Twelve were built for WW1, and another 24 for WW2.  Most surprising, concrete ships were made all around the world--it wasn't just a Californian thing.

What about the sharks?

This isn't hard.  The query:

told me that a better search would be to include the local place name, Aptos, or the name of the beach, Seacliff.  A search like this:

Okay... I won't go diving there this weekend!

And to figure out the history of sharks in the area, I did a search for:

only to discover that both of them tell me that there were shark teeth fossils embedded in the cliffs along the shore!

Okay, I modified my query to be:

and discovered that there are many fossil teeth in the area, including ones found in the nearby cliffs, just around the corner from the concrete ship.

As I said at the start, a photo often has lots more information in it than you'd expect, especially if you did a bit.  What did we do to answer this Challege?

1.  Zoom in on photos.  When I took the picture, I really didn't see the concrete ship in the distance.  Only by zooming in could I actually notice that there was something odd in the image.

2.  Look at Google Maps and Wikimapia.  Both have lots of geo-located information, and seems to work especially well for wrecks!

3.  Check on information that seems misattributed. Sometimes you'll find mistakes, but in this case, we found the information is correct... but from another source.  THAT source turned out to be incredibly useful, once we'd run down the proper reference (and in this case, found the book).

4.  Keep growing the information sources you seek.  In our case, we're looking for multiple sources of information that mutually confirm what the other has said... and NOT by re-using the same old sources over again.

Hope you found this interesting.  Look for a new Challenge this coming Wednesday!