Answer: What causes such crazy cone and flower production?

This past week we had a harvest-time Challenge.


It's Thanksgiving in the US, so our questions about sudden increases in pine cone production (and therefore, the production of pine nuts, which are just about my favorite tree product ever)  seems relevant.

Remember that our Challenges were driven by seeing pine trees like this: 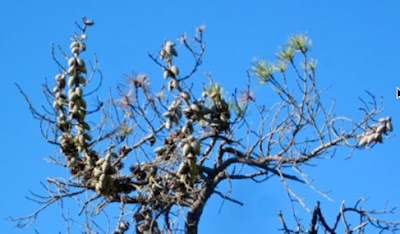 1.  Does dying (or nearly dying) lead to a sudden efflorescence in plants?

2.  If so, what causes this effect?  How does the plant "know" this, and respond?

3.  Is this "sudden efflorescence" from a near-death experience true for any other plants?

This was a tough set of Challenges, but we figured it out!   Here's what I did...

Like many of you, I started by searching for:

and variations on that query.

Mostly, these searches seemed to go nowhere. Sigh. I read a lot about pine trees dying from beetles and drought, but little about the connection with a sudden flowering (that is, an efflorescence) of cones.  I learned that pine trees produce varying numbers of cones each year, so there's year-to-year variation.  I was beginning to think the idea of "dying pine trees producing large numbers of cones" was a complete myth.

But... as I was quickly scanning a fairly low-quality site, I noticed the term "stress crop" used to describe a sudden outburst of pine cones on trees that weren't exactly dying, but were not in good shape.

Frankly, I didn't hold out much hope for this term (it was a really crummy site), but it gave me a new way to think about the language of pine trees and sudden large crops of cones.  So  did a search for:

and found a number of higher quality sites that told me a bit about how stress sometimes causes plants (in general!) to flower in large quantities.  From the first few results I learned:

1. Stressed trees produce more seeds, and pine trees in particular produce more cones when stressed by drought or insect defoliation.  (From NorthernWoodlands.org - the author is a forester and commissioner of the Vermont Dept. of Forests, Parks and Recreation)

2. Pine trees stressed by drought will produce a "stress crop," that is, an abnormally high number of cones.  (From the Oregon state Dept. of Forestry)

3.  When Shortleaf pine (Pinus echinata) is stressed by Littleleaf disease, about 3 years before they die from the disease, Shortleaf pine trees commonly bear an unusually large crop of  small cones known as a "stress crop."  (From the USDA National Agricultural Library, an article by the US Forest Service on reducing losses of forest trees by a number of different stressors.)


So, I learned a new and productive phrase to describe the sudden burst of pine cones from a pine tree that's stressed by disease or drought.


Our second question was "how does the plant know this?"  This sounds a bit odd (how does a plant "know" anything?), but let's try to unpack this idea a bit.

What I meant was "how does the plant figure out that it's time to produce a massive crop of cones?"  In order to suddenly go from few cones to a "stress crop," something has to happen in the tree to make all of the branches suddenly start producing cones all at the same time.

The only way I know of for a tree to do that is to produce some kind of hormone that gets shared between all of the branches, causing a sudden efflorescence of cone production.


The obvious query at this point would be:

From one book (Mechanism of Plant Hormone Signalling Under Stress) I learned that "...plants have developed an intricate web of complex machineries to translate perceived stress signal into effective response by modulating the gene expression or directly affecting the physiology of the cell..."

Okay--so plants DO respond to stress by using signaling hormones to make things happen.  But what is that hormone for pine trees?

While the results from this query told me a great deal about hormone signalling (and confirmed that stress can cause various hormones to signal plant changes), I really want to find out about pine trees and cones.  I modified the query to be:

This gave me much more focused results, including an article from Montana State University Extension (Pruning Trees for Health, Shape and After Storm Damage) with the useful paragraph in a section about the effect of hormones on tree growth:

As summer progresses, tree energy priorities may also be redirected towards seed/fruit production. An interesting phenomenon for many trees is the “stress crop” effect. Trees that are stressed may divert energy towards a plentiful seed/fruit crop as a “last gasp” before they die as a mechanism to ensure species survival. A heavy seed crop on a scrawny tree may indicate imminent death rather than health and abundant energy. Fruit growers use this effect by pruning trees every late winter in manner that does not weaken overall tree health but that stimulates a “stress” seed (fruit) crop.


That's fascinating (and goes partway towards answering our third question).

In another fairly technical article Cone Production in Conifers (published by the Pacific Forest Research Centre, part of the Canadian government), we read that there are many factors that determine overall cone production rates.  There's the cyclical nature of some species (abundant in some years, and then again some number of years later), but also average annual temperature, moisture, fertilizer, and... stress.  In particular, stresses of dehydration, wounds to the outer layers of bark, insect attacks all lead to stress crops.  Stress causes a rise in the level of gibberellin, which is associated with intense cone production.

Aha!  I just learned a new search term that's associated with pine cone production.  If I do a new search for:


This leads me to many more (and increasingly technical) articles on how gibberellin hormone response causes a stress crop response.

In particular, the paper Plant growth regulators and cone induction in Pinaceae (from the Centre for Forest Biology, University of Victoria, BC, Canada) is a wonderful primer on what causes pine cones to form on pine trees.  They have an extensive discussion about what hormones cause pine tree flowers (and therefore cones) to form:

The traditional methods for improving seed yield involve treatments to manipulate physiological conditions of the parent trees, which in turn enhances flowering. Flower enhancement is achieved by either physically stressing the trees, altering the tree’s nutritional status by applying various inorganic fertilizers, or applying growth regulating substances such as gibberellins (GAs)...


This was also a fascinating paper, not least of which was for it's plaintive comment about how hard it is to do this kind of research, talking about a fruitless search for a hypothetical universal flowering hormone:


There is a long history of studies whose goal was to enhance flowering [and cone production]. For decades, the search for a universal floral induction mechanism and its universal compound – florigen - consumed many careers...


But this paper also gives us the answer to the "how the tree knows" Challenge.

Summarizing here:  When a tree is stressed, either by physical damage or by the roots receiving less water than they prefer, the needles, or bark, or roots release one of several hormones (e.g., ethylene or abscisic acid) which then causes the tree to start producing one or more different types of gibberellins, which in turn cause cones to form.

If the stress is large enough, a massive crop of cones form.


The third Challenge asks if this same concept applied to other plants as well.  I gave the example of my poor, under-leafed but over-flowered bougainvillea: 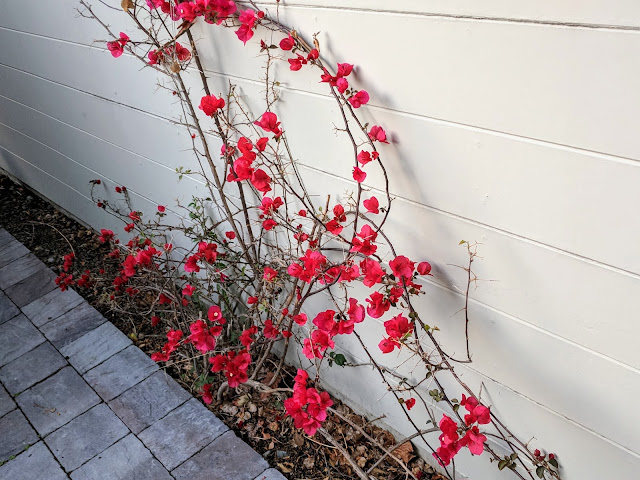 I began this search with:

and discovered that not only is this a thing, but it's quite common to withhold moisture from a bougainvillea to get it to produce lots of flowers!  Here's a quick guideline from a newspaper gardening section:

Bougainvillea flowers heaviest when the plant is water-stressed. Bougainvillea growers often withhold water for extended periods to force the plant into bloom. To stimulate blooming this way, withhold all water until the leaves begin to wilt. Then water thoroughly. For regular maintenance, water only when the soil is dry but before leaves show signs of stress. Mature, established vines rarely require watering. They flourish with calculated neglect.

I believe it, but I thought I'd do the same query in Google Scholar and see what would show up there (looking for a somewhat more authoritative answer).  I found pretty much the same thing in a journal article titled  "Stress-induced flowering" from Plant Signalling & Behavior.  In the article they point out that not all plants respond to stress in the same way, but that stressors such as  low nutrition, drought, poor nitrogen, poor oxygen, and girdling cause many plants to flower.  (Especially, they point out, any and all stressors cause Douglas fir to flower.)

What about other plants?  I repeated the query without the bougainvillea:

and found that stress causes not just pines and bougainvilleas to flower, but also citrus of many kinds, Cyclamen, mangos, and pineapples.

Yes!  In their paper "Forced flower of pineapple (Ananas comosus cv. Tainon 17) in response to cold stress, ethephon and calcium carbide with or without activated charcoal" (published in Plant Growth Regulation journal), the authors show how spraying field pineapples with either (1) an ice-slush, or (2) calcium carbide (which generates ethylene when mixed with water!) will cause flowering to take place.

Bottom line:  Many kinds of stress can cause plants to flower--including pine trees, mangos, pineapples, and bougainvillea.  When stressed by drought (which is very common in California over the past few years), pine trees will create a "stress-crop" of cones, easily seen on the branches.

There are many lessons here.  Here are three to get you going:

1.  You often find answers to other questions while looking around.  That's why it's useful to jot down your research questions before you start.  That gives you a way to structure your note-taking, and you know what the pay attention to as you research.

2.  Pay particular attention to unusual terms or phrases you run across.  These are often the key to making exactly the right query.  In this example, "stress-crop" lead to all kinds of discoveries, as did finding the term gibberellin, which led us to finding all kinds of articles about plant hormones that drive the flowering (and pine cone) process.

3.  Scholar is really useful for technical questions.  In this case, we used Google Scholar to find very authoritative references in the botanical literature.  These were often fairly detailed (and took a lot of looking up of specialty terms), but valuable in the end.

(And Happy Thanksgiving to everyone!)