... that fruit beloved of millennials on their toasts, that mainstay of guacamole, that luscious green ambrosial centerpiece of tortilla chips...  our lives would be poorer without it.

But as you know, it's a food of the New World, having originated somewhere between southern Mexico and Peru.  There is some evidence that avocados were domesticated at least 3 times, resulting in the currently recognized Mexican (aoacatl), Guatemalan (quilaoacatl), and West Indian (tlacacolaocatl) landraces.  (See the Wikipedia entry on avocado.) 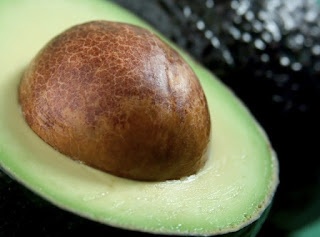 As noted, that seed is pretty big.  And that led me to this week's SRS Challenges.  How would you work out the answers to these questions?

1.  How are avocados dispersed?  If they rely on just falling from the tree, that doesn't seem to work well... so is the "natural" dispersal by animal?  If so, WHAT animal would eat an avocado... and then be big enough to carry it somewhere and leave it behind in a new place?

I think I kind of gave away a big clue here by writing "dispersal" in the Challenge.  That's a huge suggestion of a specialized search term to use in your query:

this leads directly to a Smithsonian Magazine article Why the Avocado should have gone the way of the Dodo, which points out that:


"The plant hit its evolutionary prime during the beginning of the Cenozoic era when megafauna, including mammoths, horses, gomphotheres [a kind of giant, now extinct, elephant]  and giant ground sloths ... roamed across North America, from Oregon to the panhandle of Florida. The fruit attracted these very large animals... that would then eat it whole, travel far distances and defecate, leaving the seed to grow in a new place."


This article is based on the writings of Connie Barlow in magazines like Biodiversity (article about avocados) and Arnoldia  (article about anachronistic fruits).  Both are well respected journals). And she's author of the book The Ghosts of Evolution, which is all about this topic.

To triangulate (that is, to get multiple perspectives on the same topic and look for agreements / disagreements).  It's fairly easy to get multiple articles by different authors  (e.g. National Geographic,  Science...) all of which agree on this interpretation of events.

2.  Are there other plants with giant seeds (like the avocado's) and how do THEY get dispersed?

This category of "anachronistic fruits" (that is, fruits that evolved in a very different ecosystem that now holds) include seeds of the canistel tree, the honey locust, and the Osage orange.  (From the Barlow article and that Science journal article.)  These all have the property that the ecosystem is missing animals (that used to be around, hence "anachronistic") that can disperse the seeds.

The fruits (and seeds within) are either large (Osage Orange, Avocado) or have a tough exterior (Honey Locust, Canistel).  In all these cases, the hypothesis is that really large animals, such as gomphotheres or giant ground sloths, would eat these fruits, and then deposit them later after they'd passed through a large animal digestive system, which would prepare them for germination and growth.


That is, these are really archaic fruits that literally belong to another time.  And, in the case of the avocado, a strong case can be made that after the demise of the megafauna, it was humans that propagated the bizarre avocado trees, and their seeds.

And a simple search for:   [ large seeds ]  leads handily to several lists of large seeds (e.g., the coco de mer), and then combining that name with dispersal leads directly to a discussion of how that particular seed is dispersed.  For instance:

where you can learn that these giant seeds might have been an anachronistic fruit 65M years ago, but that currently, they're dispersed only nearby the parent trees.  (Apparently they're unable to float, so they can't colonize distant shores the way a coconut palm can. See the paper by Edwards, et al., in New Phytologist.)  But other giant seeds DO require animal interventions.  Again, I leave it to you to explore...


Here's what I did to find an early illustration of an avocado.

Note that I was a bit vague, so any reasonably old illustration would do (although I admit that I was hoping for the first publication of the avocado).   Here are my four strategies...

1.  Work from Wikipedia's history (or any history of the object in question). The Wikipedia articles often give a reasonable history with references.  In this case, it clearly talks about avocados being mentioned in the Florentine Codex, a 16th-century report about Mesoamerica by the Spanish Franciscan friar Bernardino de Sahagún.  Interesting!  So I then did a search: 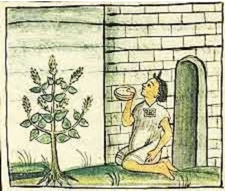 2.  Use a term that connotes age.  Often, older images or illustrations will be labeled with specific terms--archive, etching, engraving, etc.  My first guess at using a context term for age was "antique," so I incorporated this into my query:

This kind of query implies pic from a particular era. And in particular, this leads to a lot of older prints/illustrations of avocados. 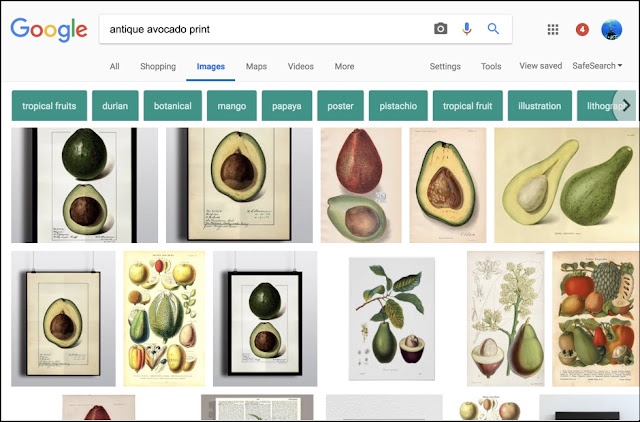 But none of these really push the date back to far, but it definitely gives us a bunch of early-ish prints.


3. Books search--set to an earlier date. I just searched for [ avocado ] in Google Books, and restricted my search to the 19th century, knowing full well that avocado was a rare word back then, so any mention probably would have been in a botanical journal.  Sure enough, I was able to find a nice illustration from 1891: 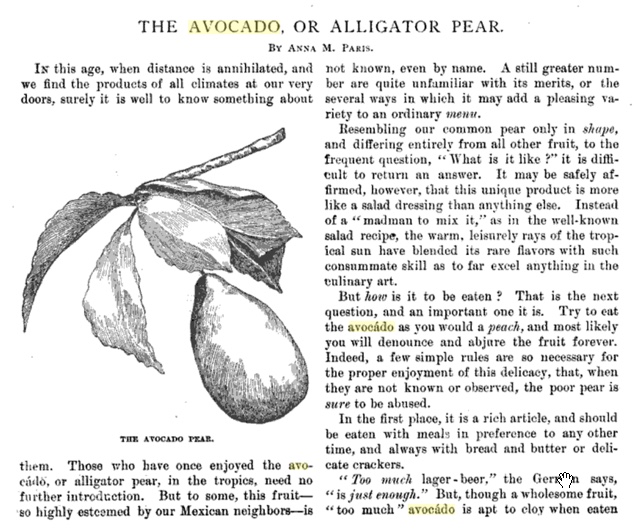 This appeared in Frank Leslie's Popular Monthly from 1891.  (Monthlies from this era often contained extensive illustrations--perfect for this kind of thing.)  I expect that more searching around would find more illustrations like this, and I leave this exploration to you.

leads to a paper on "The Early History of the Avocado" (interestingly enough, from the AvocadoSource.com web site).  This paper refers to an early book, the Suma de Geografia, published in Seville, Spain, in 1519. In that era, Enciso travelled with the great navigator and cartographer, Juan de la Cosa, during one of the first exploration of the New Worlds. He described the avocado that he saw in one of the small harbors at the foot of the Sierra Nevada de Santa Marta (trans. by Wilson Popenoe; this quote is from "The Early History of the Avocado paper)


"Yaharo is a good port, with good lands and here are groves of many different sorts of edible fruits, among others is one which looks like an orange, and when it is ready for eating it turns yellowish; that which it contains is like butter and is of marvelous flavor, so good and pleasing to the palate that it is a marvelous thing."


This is great, but I'm looking for an illustration.  I checked Google Books for a scanned volume (hoping there would be an illustration there, but no dice--it's not scanned).  But this is a good clue--perhaps I can find an article that refers to the Suma de Geografia, and that would have an illustration.   So my next query was for:

I checked Google Books (and Hathi Trust), but couldn't find a completely scanned version.  Then I looked in Images, and that led me quickly to this fascinating paper, "The Avocado (Persea Americana, Lauraceae) Crop in Mesoamerica: 10,000 Years of History" published in the Harvard Papers on Botany.  Reading through this text, I found the sentence


"[in this diagram] Every figure emerges from the earth, and behind each of them there is a tree with fruits that include the cacao, avocado, soursop (Annona muricata L.), and chicozapote (Manilkara zapota )..."

with a reference to  another paper, "Observations on the Cross Motif at Palenque" by Linda Schele, published in Primera mesa redonda de Palenque (a conference on the art, iconography, history of Palenque).

And in THAT paper from 1974, the author includes a detailed illustration from the Temple of Inscriptions, where on the east side of a sarcophagus is this (just a small piece of a much larger picture): 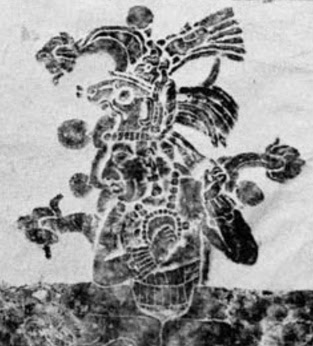 The oval things are avocados.  The Temple of Inscriptions was completed around 683 AD, so I'd argue that this is probably the first illustration of an avocado--literally carved in stone.

That's probably the earliest depiction of an avocado that I could find.

There are a few here:

1.  Using the right terms (e.g., dispersal) helps a lot!  In this Challenge, I gave you a big clue.  A precise, relatively rare term can help a lot.

2. "Reading around" in the literature can give you many other terms for searching.  In my case I learned about "anachronistic fruits," which then opened up an entire literature for perusal.


I'll be back next week with another update, and a new Challenge!