What we have here is a failure to search!


You'd think that searching to solve a problem would be second nature to me by now.

And yet, I didn't do a search last week that I really should have done.

Last Monday the front passenger window on my car went down, and got stuck in the down position.  Darn it. This is on my Subaru Outback, a nice car, but nothing really special--it's not a high-end car with lots of special gizmos and the like.  I use it to carry my gear around and keep me out of the rain.  The switch looks like this.  Push down to roll the window down, pull up to make it come up.  Except that pulling-up thing wasn't doing anything. 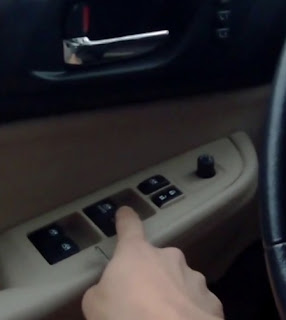 Speaking of which, did I mention it was raining?  Water was coming in through the open window, and I could NOT get it to come up.  This is a hassle.

Here's the interesting detail:  Normally, when I'm sitting in the driver's seat, I can use the switch on the driver's side door to open/close the passenger's window.  Makes sense.  Except of course, for today--in the rain.

I got some plastic and taped it up as much as I could and then made an appointment at the car dealer to get it fixed.

Interestingly, I did NOT do a search to try and debug the situation.

Because I knew a bit too much... at least I thought I knew how switches in cars worked.  Here's what I thought: 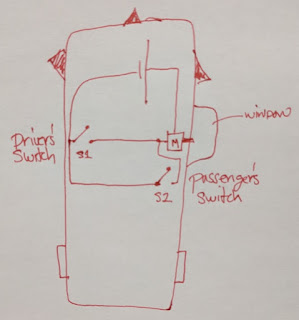 In this quick sketch, if you close either the driver's switch or the passenger's switch, then the motor (M) would turn, and the window would go up or down.   Right?

But when I used the driver-side switch to bring up the passenger's window, I didn’t see ANY decrease in the car’s overall power as shown on the tachometer (which you would see if power was being drawn). You'll notice this if you try it on your own car; with the window rolled up, if you try to bring the window up, you'll see the power drop as the motor tries to move the closed window.  This wasn't happening, and  that's how I knew it was an electrical problem.

My mental model came undone at that moment.  HOW is it possible that this would have worked?   I know switches rarely fail.  And I couldn't believe that one switch would work while the other didn't.  It's possible (but rare) that just the driver's side switch was broken.

Even weirder… once he did that, the driver side switch STARTED TO WORK!

Turns out the switches are NOT wired in parallel, but are both inputs to a master control computer.  When the window went down, some glitch happened in the  code to prevent an input from the driver-side window from being registered. But the passenger-side switch continued to work.

Very strange.  And it completely confused my mental model of how the switches in my car function.

What’s more, since my old mental model held that they were wired in parallel, there was no point in even trying the passenger-side switch. 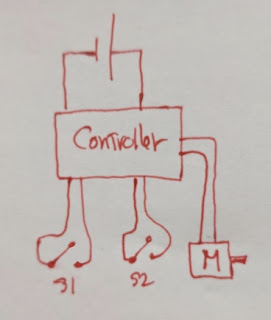 But it turns out that’s completely wrong.  There WAS value, because they operate independently.  AND if S2 works, then it will reset the controller, letting S1 (Driver's side) operate correctly.

SO... Why didn't I search for a possible solution?  (I could have saved myself a lot of time and trouble if I'd searched for it.)

Over a sushi dinner that evening, I mentioned this to my friend Tom who put down his maguro sashimi and instantly whipped out his phone to do a voice search on Google--something to the effect of  [ Subaru window no go ] which immediately brought up the Subaru support forum that exactly describes this problem AND the fix!

Embarrassedly, I admitted that I hadn't tried this query.

Why not?  (I can hear you asking...)  Because I really believed my mental model of the car wiring was correct, and that trying the passenger side switch was too improbable to work.  This is an example of a Dunning-Kruger effect, where my self-knowledge about electronics is fairly high, but the way cars are built now-a-days changed, and I didn't know it.  Chalk one up to old-fogeyism!

When things get weird, it's worth doing a quick search.  Tom found the answer for me--by searching on Google--in less than 10 seconds.  If I had done the same, my problem would have been solved just as rapidly... I thought I knew more than I really did.

Don't be so sure you know how things work--technology changes, even for things as simple as window switches.  Those changes can have a deep impact on your understanding of the world.

I'll be sure to look up the next time something like this happens.

So believe me when I say... Search on!