Although many people think of Aloha 'Oe as the anthem of Hawai'i, that status is actually given to... another song.  (See below!)

1.  Do all 50 US states have a state anthem?  If not, which ones don't?  And why? (If you're not in the US, what states in your country have anthems?  Do the states of Mexico or Canada all have similar songs?)

The simplest way to answer this question is to search for:

which brings up a couple of lists (50States.com) and the Wikipedia list of states' anthems.  When you look at these two lists, you'll quickly notice that many states have more than one anthem!  Or, to be precise, there's a state anthem (that is, a song officially recognized by the state's legislature as the "official" state song), and often there's a state song (which is also recognized by the legislature as having some special status).

So, the anthem is the one special song that the state recognizes as it's official song, often played a ceremonial events.

A quick scan of these two lists tells us that there are some surprises here!  Arkansas has a designated anthem, but also two state songs and a historic state song.  New Hampshire has TWO official songs, and 8 recognized songs.  So on and so on.  Who knew that states could have more than one anthem/song?

Much to my surprise, the state anthem of California is I Love You California (by Alfred Frankenstein!) a song that I don't know (and I suspect most Californians don't know either). An anthem might be in name only... you might not recognize the tune.

The only state to NOT have a state anthem is New Jersey.  The 50States site points out that "New Jersey’s Unofficial State Song is “I’m From New Jersey,” passed both Legislative Houses in 1972. However it was not signed into law by the Governor."

Happily, the Wikipedia list of anthems also tells us the anthems for each of the US territories, including Puerto Rico's "La Borinqueña" and the Northern Marianas Islands song, "Gi Talo Gi Halom Tasi."

Which leads us to our next SRS Research Question...

2.  As you know, such songs are usually in the local language.  France has La Marseillaise in French, Germany  has Deutschlandlied, etc.  Are there any US state anthems that are NOT in English?

And noticing that leads naturally into our next RQ....

3. Speaking of languages in anthems, are there any anthems that have more than one language in them?  Where?  Why?

Observation: I should have been more specific in this Challenge--I meant national anthems.  We've already seen a few state anthems that are multilingual.

Some countries have an official multilingual policy, and as such, have multiple languages for their anthem. Canada springs to mind (O Canada / Ô Canada), with both English and French versions on an equal footing.

Switzerland, with its four primary languages (German, French, Italian, Romansh) has different lyrics for each.  However, the official anthem, Swiss Psalm, (apparently) almost nobody in Switzerland can sing the song or knows the lyrics...

Finland's anthem has both Finnish and Swedish lyrics, recognizing that the borders between Finland and Sweden have shifted back and forth over time and the cultures have blended together into their anthem, Maamme.

Also as a product of multinational history, Belgium has a multilingual anthem, La Brabançonne (a French title that's usually left untranslated), that has verses in French, Dutch, and German.
One of New Zealand's two national anthems is commonly sung with the first verse in Māori, Aotearoa, and the second in English ("God Defend New Zealand"). The tune is the same but the lyrics have different meanings.

Many countries with multiple languages have versions in local languages (e.g., India), but the official anthem remains in only one language.

4. Which country has the oldest national anthem?

As SRS Regular Reader Arthur Weiss pointed out, "so... what do you mean by oldest?"

Do I mean the lyrics?  The tune?  The earliest official adoption date?

To tell the truth, I hadn't thought about that distinction--great catch Arthur!

... takes us immediately to a number of resources that bring up exactly this point.

The MilitaryMusic site points out that the oldest official national anthem is Het Wilhelmus, the Dutch national anthem, written between 1568 and 1572.  (Oddly, the lyrics sound as though it were written from an individual's perspective--there's a line in the anthem "the King of Spain I have always honored." Really?  What's that all about?  Sounds like more SRS is needed here.)  Thing is, this anthem wasn't officially adopted until 1932.  So, the music and lyrics are quite old, but the "official date" is relatively late.

What I WAS thinking of when I posed this Challenge is the Japanese anthem, Kimigayo, (video with lyrics) which has its lyrics taken from a Heian period (794–1185) poem.

(I remind you that "The Star Spangled Banner" dates from 1814, adopted officially in 1889; not a contender in this discussion.)

So, the tricky thing here is what does "oldest" mean?  Adoption date?  Lyrics date?  In common use date?  There are different answers to each of these questions!

I'm going to give awards to each of the categories:


Sometimes answers are more complicated than the question might suggest.

5. While I couldn't find a video of Bruddah Iz singing the Hawaiian state song, it's pretty easy to find him singing the one song that closes nearly every concert in Hawai'i.  What song is that?  (Can you find a recording of IZ singing it?)

[ song at end of concert in Hawaii ]

Remarkably, it led to this result--Hawai'i Aloha 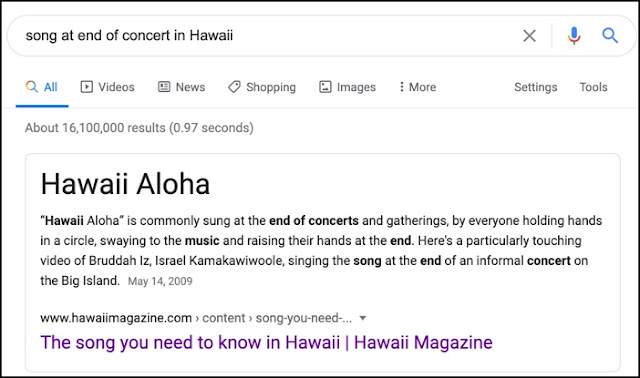 When I wrote the Challenge, I didn't know that the result would give us the Bruddah Iz performance quite so easily!

As you can see, everyone really does know all the words.  Sing along if you'd like.

1.  Be clear about your Research Questions (RQ)!  I was a bit sloppy in my question about "oldest" anthem.  When I wrote the question, I hadn't thought about the difference between lyrics date and all of the other senses of "oldest."

2. Remember the "list of..." pattern.  Although Wikipedia has "List of..." for all kinds of remarkable things, the Internet is full of lists.  Keep in mind while useful, you want to double check any of the items you find on the list.  As with all things you find, they might be out-of-date, incomplete, or just wrong.  Double check to make sure that the list items are what they say they are!

3. Expect the unusual.  When I wrote the Challenge, I really didn't expect the complexities of "oldest" nor the strangeness of "official state anthem."  Of special note to teachers:  These kinds of issues seem to always come up when you write a question (say, for a test).  When pursuing a Research Question like this, expect the unexpected.  There might be hidden depths and interesting issues at play, as we saw here.


Hope you enjoyed this. Next week... a new Challenge!