Answer: Why are some state boundaries so ... odd?

Why is the US/Canada border so complicated and strange?

If you look at a map of the United States, most of it kind of makes sense.  There are lots of straight lines that are clearly the result of surveyors and politicians drawing lines: 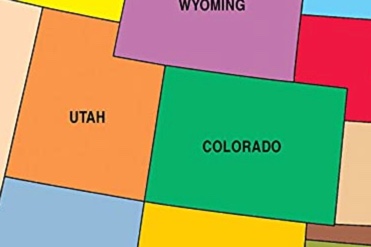 Or curved lines that follow rivers next to the straight lines:

Then, there's the northernmost point of the lower 48 states: Angle Inlet, Minnesota. 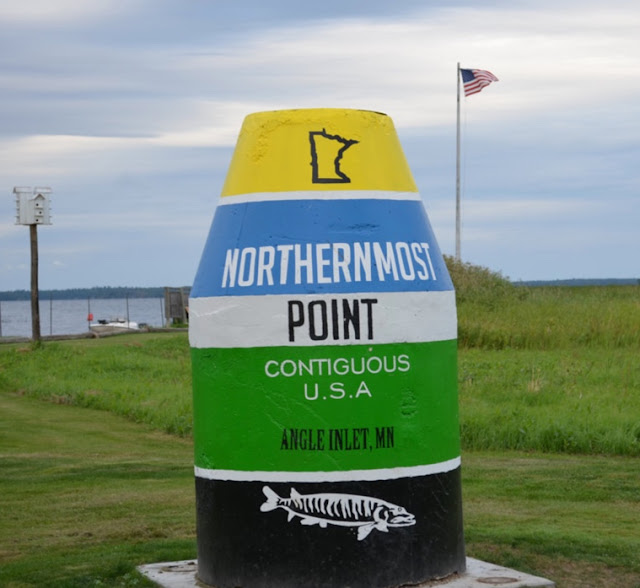 The question is WHY?

1.  Why does the US/Canada border take a sudden left turn after passing eastward of Buffalo Point?  What's the story there?

I started my search with:

and learned that this part of Minnesota is called the "Northwest Angle."

Reading the Wikipedia article for the Northwest Angle I learned that "...It is one of only six non-island locations in the 48 contiguous states that are practical exclaves of the U.S."  That is, the region of the Northwest Angle is an exclave, like Alaska, where all roads leading to it must pass through another country - in this case, Canada.

The Northwest Angle was designated as territory of the United States because negotiators of the initial Canada–U.S. border misunderstood the geography of the area.

The 1783 Treaty of Paris said that the boundary between U.S. territory and the British possessions to the north would run "...through the Lake of the Woods to the northwestern-most point thereof, and from thence on a due west course to the river Mississippi..."

But the maps weren't great at the time, the lake is complicated, and the source of the Mississippi River (Lake Itasca), lies almost due south of Lake of the Woods, rather than north and west of it. The irregular actual shape of the lake made locating the northwest corner difficult.

After a number of errors, the Anglo-American Convention of 1818, corrected the error by having the boundary continue due south from the northwest point of the lake, but only to the 49th parallel and then westward along it.

The Webster–Ashburton Treaty of 1842 then confirmed this border. However, the placement of the northwestern corner and shape of the lake meant that this north–south line cut off a section of Ontario territory to its east, now known as the Northwest Angle, and part of the US.

Bottom line: The Northwest Angle is in the US because of a surveyor's error that then got fossilized in place.

2.  Similarly, the place where the states of Kentucky, Tennessee, and Missouri meet is also complicated.  There's an enclave of Kentucky that's completely surrounded by Missouri and/or Tennessee.  How did this little island of Kentucky come to be?  (Extra credit: Earthquakes here??)

From the previous Challenge I learned the term exclave, so I used it to search for this blob of territory:

I quickly learned that this little area is called the Kentucky Bend.

The Kentucky Bend, or New Madrid Bend, is encircled on the north, east, and west by a snaking portion of the Mississippi River, while the southern portion is joined to the state of Tennessee. It’s 30 square miles of land completely cut off from the rest of the state, formed by a combination of surveyor mishaps and raging earthquakes.

In 1811-1812, a series of massive earthquakes on the New Madrid fault running right through Kentucky Bend dammed the Mississippi River in two places, causing river waterfalls and rapids with a 30-foot drop. Eyewitness accounts reported the river to flow backwards, saying they had to "hold onto their hats" while their riverboats shot upstream, capsizing while trees and shoreline cliffs buckled into the river all around them. Islands were formed and demolished, log jams shot downstream, and a giant hole opened, soon to be filled with water and now called Reelfoot Lake.

Geologists expect the river eventually to cut across the neck of the peninsula making a more direct channel, leaving the Kentucky Bend as an island.

Those riverine boundaries aren't especially reliable over time... (especially for large, active rivers like the Mississippi).

3.  The Upper Peninsula of Michigan is another oddity.  Any rational drawing of the map would have this part  of Michigan be part of Wisconsin.  How is it that this peninsula came to be part of Michigan?  (Big hint: Toledo turns out to play a part in this story!) 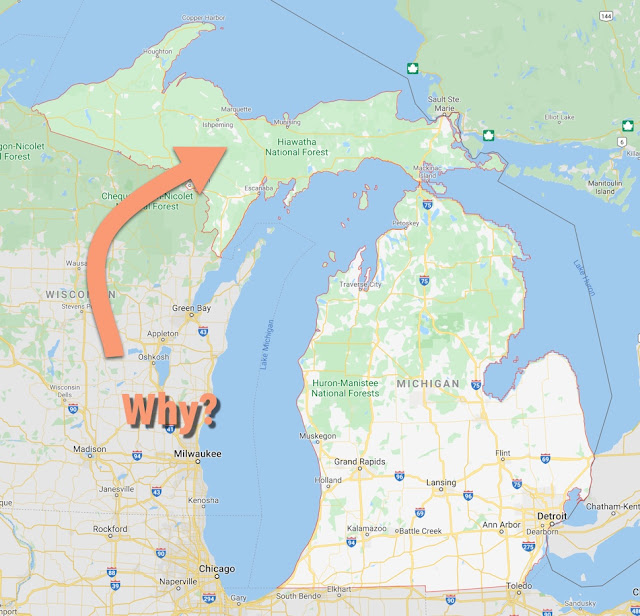 The Upper Peninsula (aka UP) of Michigan isn't exactly connected to the main body of Michigan--so what happened?

leads to a wealth of resources.  The Wikipedia article (of course), but also several sites that have versions of the UP's history.  One (the UP Supply Company's site) begins with this intriguing line:

When I read that, my only response was really??

I had to dig deeper.

By looking at several sites this history began to emerge.

When Michigan became a territory in 1805, it was just the lower peninsula and a small piece of the UP.

BUT, Michigan was then locked in the Toledo War over whether Ohio or Michigan would control the "Toledo Strip" (a rectangle of land on the border between Michigan and Ohio that ran from Lake Erie on the east to Indiana on the west).  That strip of land happened to include the city of Toledo and access to the Maumee River.

But when Michigan petitioned for statehood in 1835, it wanted to include the Toledo Strip. Both Michigan and Ohio passed legislation to force the other side's capitulation. Both states deployed militias on opposite sides of the Maumee River near Toledo, but besides mutual taunting, there was little actual fighting between the two forces. The single military confrontation of the "war" ended with a report of shots being fired into the air, with no casualties.

During the summer of 1836, the US Congress proposed a compromise whereby Michigan gave up its claim to the strip in exchange for its statehood and about three-quarters of the Upper Peninsula. There was a convention to approve the vote held in December in Ann Arbor, MI.  Because of the notable cold spell during the conference (December 14-15) the event later became known as the Frostbitten Convention.

At the time the compromise was considered a poor outcome for Michigan, and voters in a statehood convention in September soundly rejected the proposal.

Years later, the UP would turn out to have some of the best iron mines in North America, leading it to become an economic powerhouse.  Sorry about Toledo.

Bottom Line:  Michigan made a political deal with Ohio (pushed along by the Congress) to take all of the UP in exchange for the Toledo Strip.

This was a pretty easy (and hopefully fun!) Challenge.  But there are still a couple of useful lessons to take away.

1. Learn from your research as you go--especially technical terms.  In this case, I learned the word exclave in searching for the Northern Angle, and was able to use it in my search for the Kentucky Bend.

2. Check your sources, even for obvious things.  In the case of the "Frostbite Convention," there are several places that use that term--but the original documents refer to it as the "Frostbitten Convention."  I was slightly surprised, but found that someone along the way converted the term just slightly... Be careful out there!