Answer: What's this rusty thing I found in the woods?

As you might remember, I went for a run and spotted something large, rusty, and hovering just behind the trees on the side of the road.  This time, I was jogging down a quiet country road in the eastern Pennsylvanian Poconos.  Naturally, I had to stop for a few minutes, take a few pictures, and save my SRS for later.

As you can see, this is a very large, very rusty, very old drilling rig that was abandoned years ago.  It's at least 60 feet (20 m) tall, and has several large wheels at the bottom. 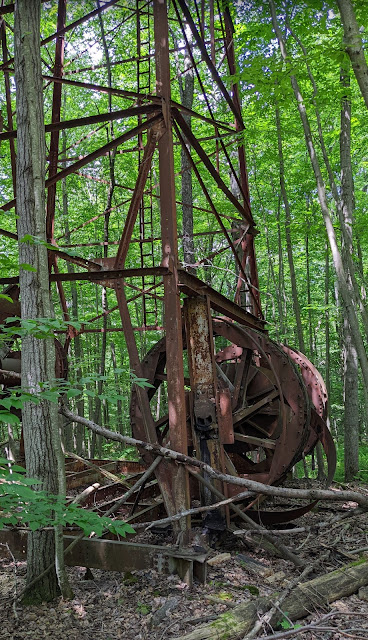 And, naturally, my curiosity was piqued:  What was this?  Why is it here?  How long ago? 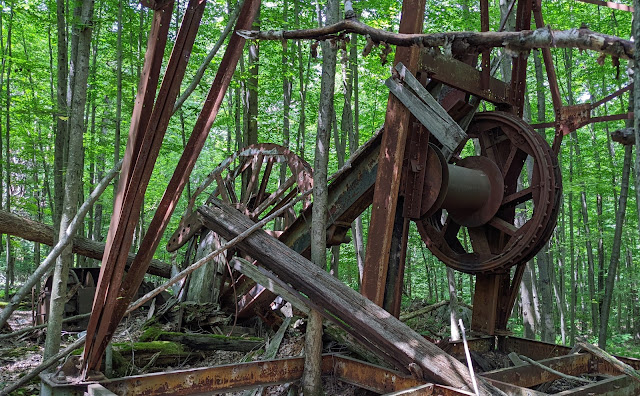 (You can go back to the original post to see even more images that I took that day.)

Those pics form the basis of the SearchResearch Challenges for this week.

2. When was this drilling rig first setup?

3. Who owns this thing?  And what's its current status?  (Obviously, it's not in operating condition--but it might still be a viable well.)

As mentioned, I had a really good idea that this was an oil drilling rig (I've seen literally thousands of them during my formative years in LA).  So I started with this query:

[ oil drilling in the Poconos ]

The first results was to a map of oil and gas wells in Pennsylvania (on a site run by American Geosciences Institute).

When you then click on the interactive map in the center of the page, it takes you to a map view of oil, gas, methane wells on a site run by the Pennsylvania state Department of Environmental Protection (DEP).  The map they produce let's you see this:

We don't really (yet) know what kind of well this is, so we need to start our search broadly--so in the menu on the left, select all types of wells, then “all status,” then “well designation” (conventional and unconventional), then “Submit request."  You'll see a bunch of new dots appear. Finally, we can zoom into Mountain View Road in this corner of PA.  This is closeup view and the blue dot is the well we seek: 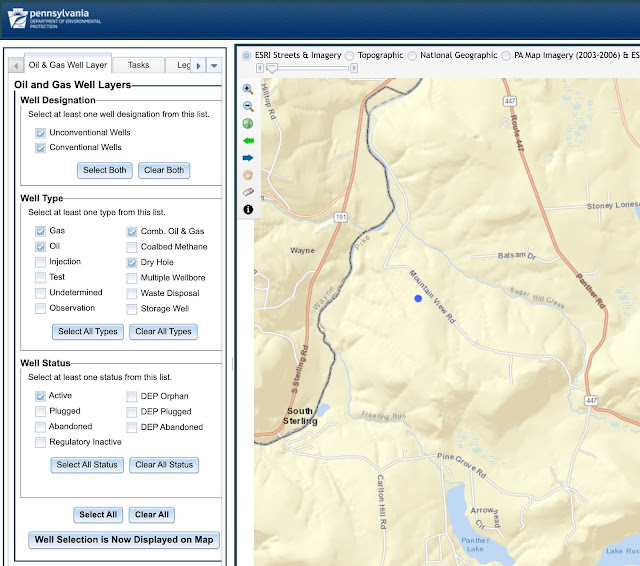 THEN select the “I” (information) tool in the window (look at the menu that's in the upper left corner of the map), and now one can click on the blue dot and see: 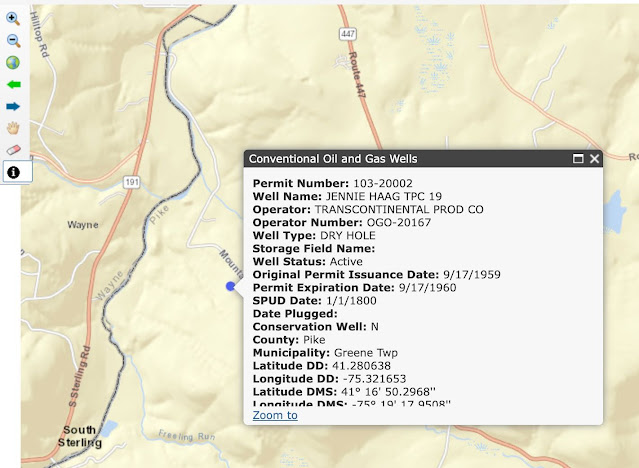 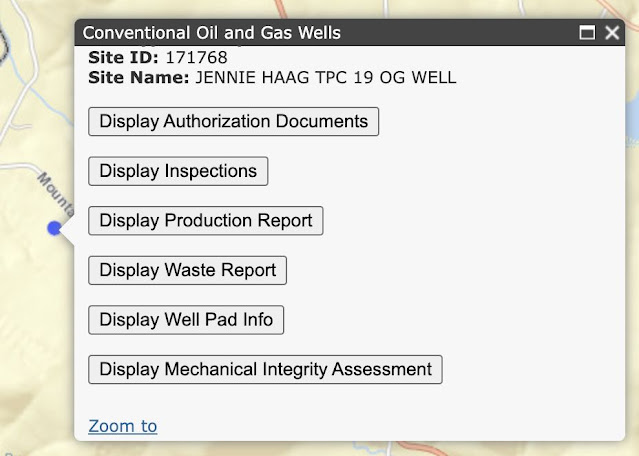 Combing through the data here (in particular, the "Display inspections" report), we find that this is:

“well record says that the well was temporarily abandoned”

Since there's really no other well nearby, and since the Site ID is very clearly the same as the location of my photo, I'm convinced this is the same site.

I would have sworn that this rig was at least 100 years old, but the data is pretty clear--it's only from 1959!

Farther down in the search results I also found WellWiki.org -- when you do a search for the duplicate information (using the permit number we found above) on their website, you'll get to:  https://www.wellwiki.org/wiki/37-103-20002

WellWiki also gives easy access to the last well inspection (done on 2017-03-02), where the report was:

Inspection of the Jennie Haag (103-20002) well in Greene Twp., Pike County conducted March 2, 2017 at 12:00 pm. The well is in the woods, East of Mountain View road (PA Gas Mapping coordinates and old location plat are accurate). You cannot miss the well because there is still a 60-70’ abandoned rig on location. I walked up to the rig, it was very rusted. Below the rig was a wooded cellar filled with dirt, leaves, wood, and some newer pieces of trash. There was a cut tree stump in the cellar where you would expect the well to be. I lifted it up; no well or monument. No discharge or flow. I dug around a bit and could not find a well. The well record says the well was temporarily abandoned; not plugged. However; A PA Geology report published in 1960 states this well was plugged and abandoned.

That pretty much accounts for the well.  Probably drilled in 1959, but it was a dry hole and abandoned in 1960.  I don't know why the Transcontinental Prod Company just left everything there in the woods--that's still a puzzle.

I did the obvious few searches to find out more about TPC, but WellWiki.org was the the best source of accumulated information.  There I learned that they had 14 wells across Lackawanna, Luzerne, Pike, and Wyoming counties in Pennsylvania, and that they had their office at 744 Broad St, Newar, New Jersey 07102-3802 (which is a rather fancy building in downtown Newark!), but the obvious newspaper checks didn't reveal much.

Interestingly, in pursuing this, I also found the website MineralAnswers that also aggregates information about oil/gas wells across the country.  It's a paid subscription, so I bought one year’s worth for around $40—anything for the SRS cause!

Using MineralAnswers, I found that Transcontinental Prod Company all the same information--the only new data is that all of their permits were issued in 1957 – 1959, with no records after that.  What's more,  the status of their wells are all “Drilled uncompleted." They seem to be all gas wells that were dry.  It's not really a surprise when you look at the full map of PA wells--this particular well is well east of the productive regions of the state.  I spent a good deal of time searching for any trace of the company, but with luck like this (14 wells, NONE productive), I'm not surprised they vanished into the sands of time.   Ah, well.

There are clearly a LOT of active wells in Pennsylvania, but Another nearby well (that’s currently flowing water, but no gas) in Pike county is the “Walter Hess TPC-5."  Water is always good, but I think they would have preferred oil or gas.  (Same company, different permit: 1958-5-2)

But now I was curious about what an old-fashioned oil drilling rig looked like.  Was this one typical?  Was this really used for drilling back then?

My search was for:

Leading to a bunch of nice images, including this one of a cable drilling rig that I've modified a bit to clarify the layout of the device. Note that the images above clearly show a cable drilling rig, not a rotary-drilling outfit, that's where the big wheels come from!

You can see how this rig is the precursor to what I found in the woods... the derrick, the wheels and even the bands running between the wheels.  On the far left (in the little house, #33) is the engine (#20) that powers the whole thing.  Once you see this diagram, the wreck in the woods makes a lot more sense.   (You can see a modern cable drilling rig in this YouTube video.)

1. Obvious searches can lead to useful sites that are not searchable!  At the beginning of this Challenge, we did a fairly simple search, but then had to spend considerable time searching on the gas/oil well database sites.  This is a reminder that not all information is accessible to Google...
2. When using database sites, you have to know how to drive their tool.  In the PA EPA interactive web map, you need to figure out not just how to search for ALL well types, but also that you need to click the "I" (information) tool before clicking on the geo-located dot on the map.  The instructions aren't really clear, and that's fairly typical for lots of professional sites.  If you think there's a way to find the information, there probably is... you might need to spend some time exploring the site.
3. Repeated data isn't additional credibility! (It's just a repeat.)  In this is episode we found three sites with well information.  But it's ALL THE SAME information! Most likely, the state EPA site is possibly the original source of the data.  (Why?  Because it's their job to collect and organize that information.)

Hope you enjoyed this Challenge... even if it did take a couple of weeks to get back to this.  (Note that we'll be back on our regular schedule starting next week, August 17.)