Finding out who said what turns out to be trickier than you'd think.


Let's look at the obvious query:


[ Writing is easy; all you do is sit staring at the blank paper until the drops of blood form on your forehead ]


This is a bit long for a query, especially if (as is likely with such a long query about a quotation) you've probably got a few parts of it wrong.  So let's change this query to be just the unlikely parts.  Something like:

[ writing is easy   staring at the blank   drops of blood  ]


(Note that I didn't use double quotes here.  I could have, but it doesn't matter much.)


Both searches work reasonably well and give more-or-less the same results.  However, the second (shorter) query is much more likely to work, as it's much LESS likely to have an error that will send you off on a goosechase search for some other pithy expression.


But I'd like to hold us to a higher standard than just what appears in the snippets on the search results page as they're automatically extracted from the original text on the landing page.


And, as it turns out, quotes are VERY often misattributed or misremembered.  This starts the problem.


A good quotation attribution is actually often tough to find.  What I'm really looking for is something that the supposed author actually wrote (that is, with their byline), or was reported by someone who heard it firsthand (and then actually wrote their recollection).


When I did this search/research, I kept finding attributions to Gene Fowler.  But oddly, for someone who was so prolific in his writing, I could NOT find that phrase (or anything like it) in his writings.


That struck me as odd.


I mean, I checked Google Books (which has a number of Fowler's books in it), and I checked Google News Archives--again, I can find many articles by Fowler, but nothing with this quote in it.


So I started checking collected books of quotations, hoping to find a good reference for the source.  But it turns out that many quotation books just give the attribution, but not the reference.

This was getting to be disappointing.


Finally, after browsing through many books of quotations, I finally discovered one that gave the best source references I've found yet.


The Quote Verifier:  Who said what, where and when by Ralph Keyes (2006)   This book is a great compendium of pithy quotes WITH the references for each given in great detail.  As I read through the book, I began to believe that this was the resource for me.
I went to Google Books, found Keyes' book, and did a Search in this book for [ Fowler ] 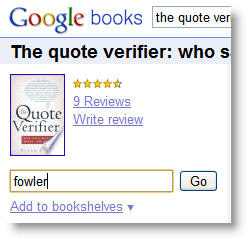 And there, on page 257 I found his entry about this quote.

(Click on the image to make it larger.)
This little analysis by Ralph Keyes points out what really happens with quotations.  They're often muddy in origin, frequently based on an earlier saying and evolve towards the more succinct and more memorable.
In his book I Never Metaphor I Didn't Like, Mardy Grothe, also attributes this quote to Walter (Red) Smith.
Both books come across as fairly carefully researched (especially Keyes book, which goes to a great deal of trouble to track down origins and variants of phrases).
So, as Keyes says "Verdict:  Credit Red Smith..."
I still haven't found a direct quotation for either Smith OR Fowler, but I have found confirmation in two separate books, both of which are well-written and carefully researched.
And I trust these sources over endless mindless repetitions of attributions without sources.
In truth, that's what a lot of this boils down to--an evaluation of which source you're going to trust.
In this case, I trust carefully researched books (which have an excellent reference list in the back) over one-line attributions on random web pages.
Posted by Dan Russell at 6:48 AM