Figuring out the differences between fishes

Sorry about being away the past few days... I was on a SCUBA diving trip with a few friends in the Bahamas.  (I know, I know... life is hard.)

But the experience made me appreciate the value of the biologist's nomenclature, the Genus/species name for everything.

You probably know that humans like you and I are Homo sapiens.  And you probably know that the "scientific" name for a living creature is something like that.  This way of giving a name to an organism is called "binomial nomenclature" and just means "two names naming system."

The capitalized term (Homo, which just means "man") is the genus name.  Think of it as the family of related organisms.  And the second term, sapiens, (meaning "wise") is the specific species name.

Why go to all this trouble?

Because it gives just one name to an organism, rather than a whole bunch of names that vary from place to place.

Now, why do I bring this up?

Because in the Bahamas there's a fish called (locally) the "zebrafish."  It's black and white (mostly) and has obvious stripes. Here's a picture I took this past week: 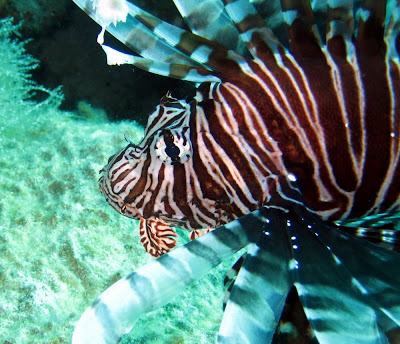 So it makes sense. Looks a bit like a zebra.

UNFORTUNATELY.. that's also the name of a freshwater fish that lives in Australia (and has no connection with this fish).

If you look up [ zebrafish ] you'll see all kinds of fish with this name.  That's where the binomial name comes in handy.  The fish above is really a Pterois volitans -- which is also called the "red lionfish" and the "scorpion fish" in different places.


What does this have to do with search?


Using the binomial name for the fish clears up the ambiguity.  And a search for that name:


will give you information ONLY about this particular fish.  This is generally true for many animal and plant names.  A "daddy longlegs" in the US is a kind of spider.  In the UK it's a kind of crane fly, which is a very different insect.


In general, when you know the specific name of something you're looking for, that's often the best way to search for it.


But be careful that you really know that this is the right name.  Using the wrong search term when you think it's the right term can be a recipe for un-success.