Answer: What was Arthur Thorpe's job?

Here’s the quick answer:  Arthur A. Thorpe was an osysterman living at 1603 California St in San Francisco, 1899.  He was reknown not just for his mustache, but also for his skill at bowling (10 pins).  He’s mentioned several times in magazines and newspapers of the time for having bowled a perfect game (that is, with a score of 300—a much tougher and rarer thing in 1899 than today). 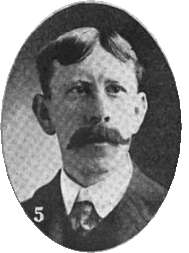 I was thinking about how hard (or easy) it would be to learn about the life of a person living in San Francisco at the turn of the 19th century.  I stumbled across a telephone book of SF for 1899 and started reading.  Weird, right?  But let me tell you, the directories of 1899 are VERY different than what you might think.


As you can see, people were pretty open about sharing all kinds of information about themselves.  (And you thought this was purely a Facebook phenomenon!)  As you can see, not only are some really interesting occupations listed, but if you were unemployed, your social position was listed.  Some of the more interesting jobs I noticed:  “cigar box maker”  “fancy card writer” “engrosser of resolutions”  “Dow steam pump operator”… but then again, you get the occasional “widow” or “unemployed” along with the usual bakers, machinists, pressmen and telephone operators.

In my search path, the key was to realize that (A) I needed to find some master listing of people and their jobs, and  (B) directories in the late 1800’s would list the person’s job title along with their street address.

So my first query was for [San Francisco directory 1899]  My hope was to find a master directory of everyone living in SF in 1899, and that's why I included the term "directory" in the query--that was a description of the kind of thing I needed.

This led me pretty quickly to the Crocker-Langley directoryfor the year 1899.    and one click there to the full-text of the document.  A quick Control-F in that text document (once it finished loading… it’s pretty long) showed me that Arthur A Thorpe was an oysterman working for the Darbee and Immel Oyster Company.   (Note that Arthur Thorpe was the 41st in the list.) 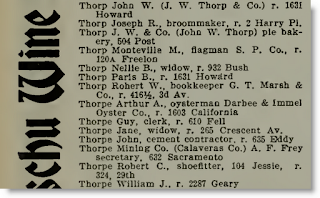 As good as this is, I really wanted to see the original scanned version.  A bit more searching for the Crocker-Langley directory [Crocker-Langley directory 1899 filetype:pdf] lead me to the PDF of the scanned version. (I took a bit of a chance by using the filetype:pdf restriction.  I was just guessing that someone would have scanned it.  I was right.)   It’s much more satisfying to read than the somewhat errorful OCRed text-only version.

The page with Thorpe’s entry  is shown along with an ad for “Kellogg’s Whisky: Cure la grippe”… somethings never  change.

How many oystermen were there at the time?  If you just do a Control-F in Chrome on the text file, you’ll see there are 48 hits for the word “oysterman” – so there were at least 48 such people listed in the directory.  (However, I also noticed that while there are people listed as “Chinatown Tour Guides” for their employment, there are very few Chinese names in the directory… so I suspect that more than a few people didn’t make it into the book.)

I wanted to estimate the total number of oystermen on the bay living in San Francisco at the time, so I then did a quick search for [ “oysterman” OR “oystermen” OR “oyster man” “San Francisco” 1900 ] hoping to find a resource that would discuss their lives.  Sure enough, I found Bulletin 123 from the California Department of Fish and Game(1963)
A compelling text about the history of the oyster industry.  (I’m not kidding—it’s really interesting to read how the Dept of Fish and Game hoped to exterminate bat stingrays in the San Francisco bay ecosystem!  It’s a look back to a far simpler view of fisheries management.)

But within that text you’ll find that San Francisco bay produced around 2.7 million pounds of oyster meat.  Now you have to take into account that there were oyster beds all around the bay (including some very close to the Dumbarton landing, not far from where the Googleplex is located today!), so just 48 oystermen seems a bit small.

This is very much in line with the Dept. of Fish and Game report mentioned above (from 1963).   In their section on oystering in San Francisco bay between 1875 and 1910, they write: “Reports on the San Francisco Bay oyster industry state that about 100 men worked on the beds (Hittell, 1882, p. 364; Townsend, 1893, p. 358; Wilcox, 1895, p. 207). Townsend says that this number was increased considerably during peak activity, probably during harvesting for the winter holiday season and during seed planting in the early spring and fall. About 90 percent of the men were single, itinerant  workers  of Scandinavian origin, mainly recruited from the San Francisco waterfront.”

That suggests that not all of the oystermen would have been in the directory.  So our estimate of 48 – 123 oystermen in San Francisco in 1899 is pretty reasonable.

Now, to find out more about Art Thorpe’s life, his hobbies and such, I turned to Google Books with the search [ “Arthur Thorpe” SanFrancisco 1899..1905 ] (I used the date range operator to give me hits around the 1899 time and to exclude hits from other Art Thorpes later.)

That took me to the magazine “Western Field: The sportsmans’ magazine of the West” (vol 3) and there I found that he was a crack bowler. There I found both his picture and the following text: 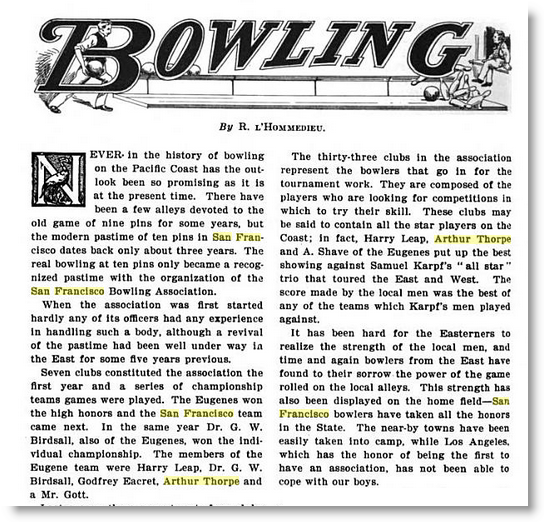 He’s mentioned throughout several more publications as a master bowler, even gaining a mention in Hawaiian newspapers for his feat of bowling a perfect game and a bit of notoriety for his high stakes bowling games in 1904.  (Link to SanFrancisco Call newspaper archive for 1904)

Search lessons:  There are many to take away from this particular challenge.  But let me highlight just one for today: When you're looking for a particular kind of thing, you need to include the term that best describes it.  In this case, we used the word "directory" to get to the San Francisco directory from 1899.  Without using that word, it's really tough to find your way to another collection that will work nearly as well.
So, when you get stuck on locating a particular kind of document, consider adding in a descriptive term (e.g., "directory" or "yearbook" or "album") as a way to provide additional context to the search.  With it, you'll likely be much more successful!