Three Roman legions were strung out in a long line at least 20 kilometers long. It’s been raining and conditions are generally miserable. The trail through the forest is muddy, everything’s wet, the food isn't great, and life generally sucks for a soldier walking deep in a foreign land on an improbable mission of conquest.

Suddenly, screams and battle cries come from nowhere.  Out of the forest flies a vicious attack along the entire length of the march.  With light swords, large lances, and narrow-bladed short spears, Germanic tribesmen pound the legionnaires, sweeping in from the forest, hacking and thrusting their way down the line.

Rome’s finest fight back in a doomed attempt to save themselves.  Although the battle takes 2 days, in the end the three Roman legions, around 20,000 men, were utterly destroyed. 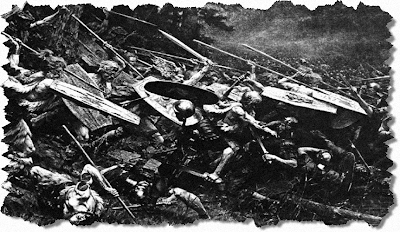 Even now, 2000 years later, you can still find bits of Roman military equipment at the battleground, scattered along 20 kilometers from one end of the long line to the other.

In the battle, all of the three Legions' standards, their Eagles, were lost.

1. Who found the lost eagles?

2. Someone gave one of the eagles’ finders a posthumous honor
in September.  What was the honor and who bestowed it?
(And for extra credit, who was that eagle finder’s wife?)