Answer: What kind of pilot doubled in the past decade?

The short answer:  Glider pilots (with “rotorcraft” pilots almost, but not quite, doubling as well).


[Edit: June 21, 2012]  Not so fast.  Please read the next blog post about a correction to find that this post has an important error in it!  The answer really IS "rotorcraft."

Remember that the question was “What category of pilot (that is, with a specific kind of US pilot's license-such as commercial, airline transport, helicopter, etc.) has more than DOUBLED between 2001 and 2011?

I knew that the FAA would track these things.  So I first looked for what kinds of official US pilot’s licenses there are.  So I did the first, obvious search of:  [ us pilot certification ] and found the Wikipedia article listing the kinds of pilot certificates and the types of aircraft pilots can be certified to fly.

Student Pilot: an individual who is learning to fly

Recreational Pilot: may fly aircraft of up to 180 horsepower and 4 seats daytime

Commercial Pilot: with some restrictions can fly for compensation or hire

Airline Transport Pilot (ATP): able to act as pilot in command for an airline

Then I found out that the categories of aircraft for which a pilot may be rated are: Airplane, Rotorcraft, Glider, Lighter than air, Powered lift, Powered parachute, Weight-shift-control (e.g. hang-gliders).

BUT... while reading through the Wikipedia article I noticed an unusual term that I didn’t know:  “airmen certificates”

And that gave me an idea.  I wanted data directly from the FAA, so my next query was:

And that was what I needed.  "airmen certificates" is the FAA's "term of art" to refer to active pilot licenses.  Once I knew that term, I could easily zero in on the kind of data I needed.

Clicking through the results I quickly found two spreadsheets (one from 1998 – 2008, and then another from 2008 – 2001).  I downloaded the two Excel files and merged the two sets of data together.

Now I had the complete table for active certificates by type (see the list above for definitions):

And once I had that, it's easy to graph the number of pilots by kind and compute the growth rates from 2001 to 2011. 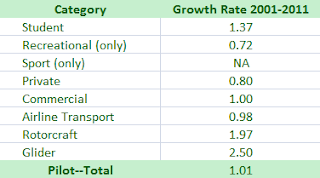 Note that the graph shows something interesting:  While the growth in glider pilots DOUBLED, it's still just a tiny slice of the overall aviation pie.

And while several readers commented that there was a huge growth rate in UAV (drone) pilots, there's not any way to know that through the FAA.  They don't (so far as I know) require any kind of FAA certification to fly.  And the number of such pilots certainly isn't tracked!  (If you find hard data on this, I'd love to know how you found it!)