Answer: Most beautiful woman in California shot dead; where is she now?

The most obvious search [California most beautiful girl 1890..1900]  seems like a good idea. The number range would limits results to those than mention a year date between 1890 and 1900… but...  it doesn’t work very well.  The search terms are too common—we need to approach this from a different angle.

There are a couple of different approaches:

From that, it’s not hard to find a variety of newspaper articles describing the life and death of Marian Nolan.

Her life reads like tabloids of today:  selected at 16 to pose for the perfect representation of California womanhood, later married (and divorced) a Mexican millionaire, Don Fernandez Cabrero, then a socialite in San Francisco and aspiring actress who played the part of vestal virgin, but only ever had a few speaking lines.  (Remember that this was before the days of movies.) 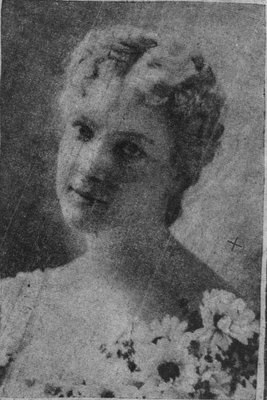 She had obsessed fans who appreciated her beauty and her intelligence in “appearing in a series of classic poses.”  (One of the entertainments of the age was to recreate classical scenes with living actors.  They’d move into position and hold still for a few moments, living statuary for the crowd.  Really.)  One of her fans was a stalker (Edward Marschutz) who finally shot her dead in front of her house at 736 O'Farrell Street in downtown San Francisco after he propositioned her and she whacked him with her umbrella.

The October 21st, 1909 edition of the San Jose Evening News has an article that tells the whole story.  As the news account said:

“He recoiled for a moment [from being hit with the umbrella] then ran close to her and fired his revolver point blank as she turned to run.  He fired again as she fell, then pressed the revolver to his temple and blew out his brains, falling by the side of the woman he seems to have loved to madness.”

Newspaper language was a bit more colorful in those days.

Search lesson:  I found this source, and others, by using the Google News Archive (easily found by doing a search for [ Google news archive ] – I won’t bother telling you the click path—I don’t know what it is and never use it that way in any case).

Note also that spelling was somewhat variable in this corpus.  In some places, her name is "Marian" and in other's it's "Marion."  The killer is sometimes "Marshuts" and in other places "Marschutz."  This isn't just OCR transcription errors, it's actually that way in the original texts.

So be aware that you might have to try different spellings of the name to actually find a person.