We think of highly processed foods as being a relatively recent phenomenon.  But you might be surprised.   Here’s a photo I took on a recent trip. 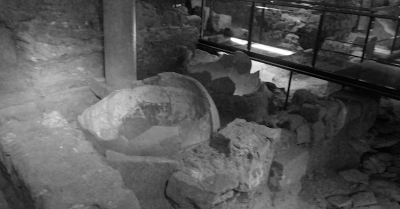 This is a view of an ancient food production site somewhere in the Mediterranean, a place where byproducts were heavily processed into something that was pure yummy goodness.  This pic shows several vats side-by-side.  They're pretty big--maybe 6 feet across and 4 feet deep.

When I first learned about this, I couldn’t believe it was real, the processing they used seemed to be unsanitary at best, and just weird at worst—but then I actually tasted some and… well, I now have some of this stuff in my fridge (although mine was made more recently).

On the far left of the top picture is a container that this substance would have been shipped in.  Some places (especially one of those connected with the volcano shown above) were famous for making this stuff.

Making this stuff was a pretty aromatic process.  Most of the production facilities would have been kept outside the city walls.  But it was such an unexpected and strange production process that I KNEW it had to become a Search Challenge.

Q:  What is the connection between a huge & dramatic volcanic eruption in the Mediterranean,  this food-production facility, and the professor shown in the picture above?

It’s a tasty question, sure to get you salivating!