Answer: What, why, and where are these stone circles? 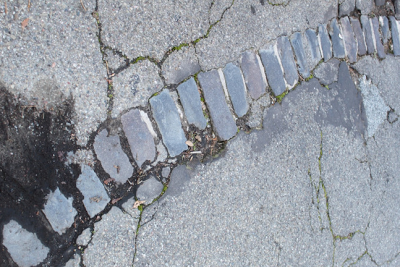 Quick answer:  The brick circles show the outlines of underground cisterns of water that can be used to fight fires even when the city’s regular water supply is broken.

First, I’m impressed that so many people recognized San Francisco, the City by the Bay, from the pictures I showed.  I guess it’s not a completely wild guess, given where I work and those hills in the background, but still—that’s impressive deduction! 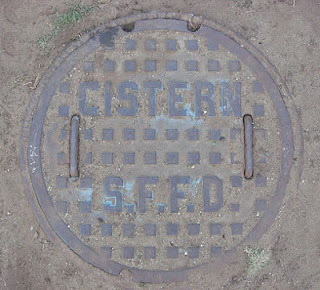 The fastest route to solving this challenge was simply to type in the simplest possible description of what you can see in the images.  This is case:

.. and then let autocomplete give you a suggestion for San Francisco.  If you take the suggestion and run the query:

There are a number of sources that give various versions of the answer.  Let’s talk about those versions for a moment. 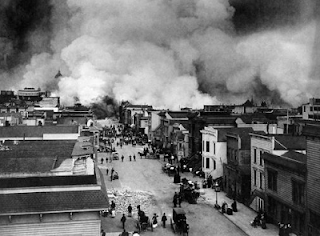 The circles mark cisterns for emergency fire-fighting water supplies that were put in place after the great 1906 earthquake and fire that destroyed most of the city.
The SF fire department claims there are 172 cisterns on this page – but in other SFFD pages, they say the number of cisterns is 177.  Go figure.  I imagine there’s a master map someplace with all of the cisterns (see below), but bear in mind that the city is building more cisterns even now (see the Fire Commission meeting minutes from 2011  ) so the number COULD be varying!

Are the cisterns pressurized? Many readers gave solutions that commented on the cisterns being pressurized.  They could be, but keeping large underground tanks pressurized for more than 100 years would be an engineering challenge.  (Especially in a place like San Francisco, which has its fair share of earthquakes.)  What’s more, since the cisterns were built in response to the great earthquake and fire of 1906, the engineers realized that they couldn’t rely on having power or intact water lines throughout the entire city.  This led to the design of the cisterns as more-or-less stand-alone reservoirs.   As this page from the SF fire department illustrates, there are actually 4 different water supplies for fire fighting in San Francisco.

(1) The high pressure system (most US cities have this—it supplies the ordinary fire hydrants at curb-side).
(2) The low pressure system just taps into regular drinking water supply—these hydrants are all white.
(3) Sea water system.  There are 52 suction connections along the northeastern waterfront that allow fire engines to pump water directly from the Bay.  Both city-owned fire boats can also supply saltwater to the system by pumping into any of five manifolds.

(4) Cisterns—these are the big tanks of water (usually around 75,000 gallons each) that are under key street intersections.  They are unpressurized, but the water can be pumped out through the green-topped hydrants.  On the site SFFD says “…the cisterns have no connection to either the Water Department or high pressure supply system. They are under continual inspection by the Fire Department and are kept full by the Bureau of Engineering and Water Supply.”  That is, they go around every so often and pour water in them, usually from the low-pressure system. 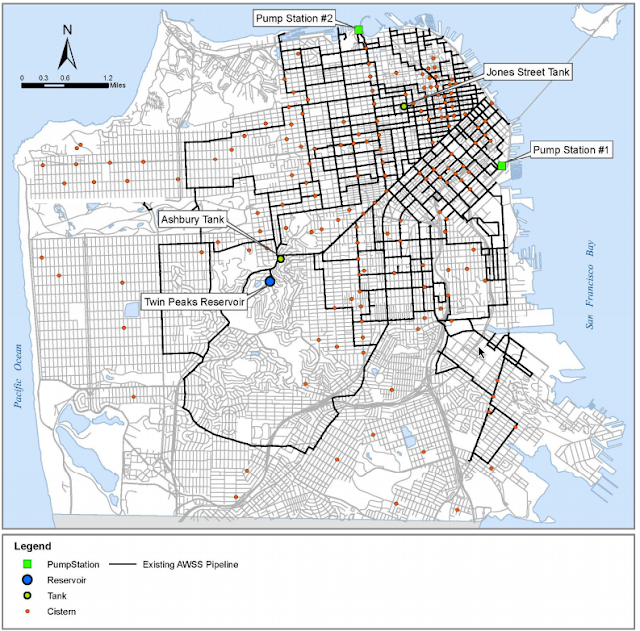 For some truly beautiful photos of the cisterns, see: untappedcities.com/2012/06/29/cisterns/

Search Lessons:  READ CAREFULLY!  Several readers passed along information that the cisterns are part of the pressurized system.  I looked at all of the references that readers gave, and I can see why you might make that inference.  But if you read carefully, in most cases you’ll see it’s not actually implied… but merely a co-occurrence of a discussion about the “pressurized system” next to the discussion about cisterns.  Careful not to overread.  Pay attention to where and when the topic changes.  (And, of course, always look for a non-copied confirmation in a second source.)

Post script:  Regular reader Carolyn sends in this note:  "I found a photograph of one of the San Francisco cisterns, taken during the ongoing auxiliary water supply upgrade.  This photo won a place among Engineering News-Record's 2012 Year in Construction best photos."

So that's what they look like from the inside! 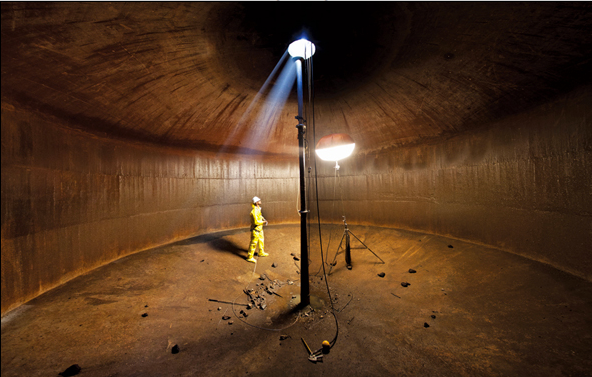