Answer: Can you find a political cartoon from the day...

(Sorry about being a day late.  I'm setting up for a big class we're running next week, and yesterday was a bit busy...)

As you remember, StephanieW from Mariner High School wrote in with a question about how difficult it was for her students to find political cartoons about a particular even from the time when that event was taking place.
Can you solve Stephanie's question?  Our Search Challenge for yesterday was:

2.  What advice can you give young searchers about how to solve this search challenge?

Lots of readers wrote in with great suggestions.   Let me tell you what I did....

leads to a whole pile of articles.  I learned that the Freedom Rides happened during May of 1961 when a dedicated group of men and women, black and white, boarded buses bound for the deep South to challenge segregationist practices and non-compliance with the US Supreme Court decision that prohibited segregation in all interstate public transportation facilities.

2.  Searching for images from that time.  My next search was to turn to Google Images with the query:

I turned on the black-and-white color filter, and ended up with an awful lot of images (and no cartoons). 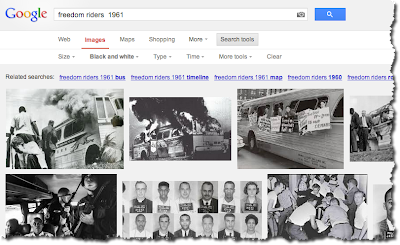 I experimented a bit, and found that turning on "Line drawing" filter didn't help much.  So I modified the query to include a description of what I was looking for, in this case the terms "political cartoon"...

and this time, I didn't turn on the black-and-white filter.  This gave me a pretty good result. 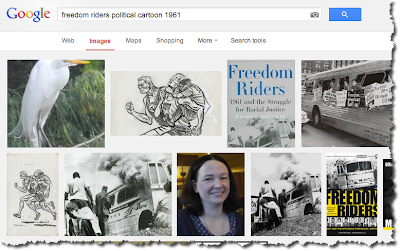 When I clicked through to see the cartoon on the original page, I found two other things...

This gives me two additional research strategies.  Let's check to see if Herb Block had any other cartoons on the topic.

3.  Using an individual to find more information.  Since Block did at least one cartoon on the topic, maybe he did others.  Let's try this query in Google Images:

Which gives us another Freedom Rider cartoon (the three guys, 2cnd row, 2cnd column).  When you click through the image, you find the cartoon described as "We don't want no troublemakers from the United States" with the cartoonist using three armed thugs to criticize the mob that attacked the Freedom Riders in Montgomery, Alabama, on May 21, 1961. 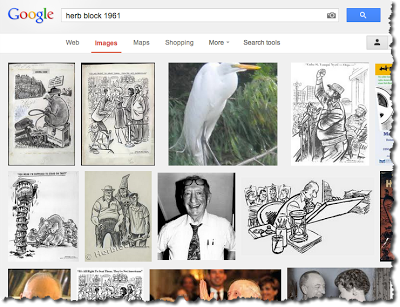 This is interesting because it's showing that another, very different strategy sometimes works quite well.

So now I'm curious about the other item we noted from above, that is, that the LOC has a cartoon collection (who knew?) that might be worth checking.

As you can see, we've picked up another cartoon that's relevant.  (Row 2, column 1) 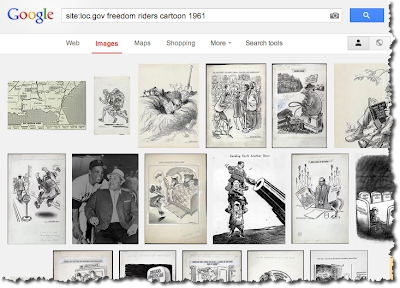 As you can see, these cartoons are a little far apart.  So this really WAS a pretty good challenge.


What would we tell a student about searching?

I've collected several of the ideas from the comment stream together and edited lightly.

When you search for something specific that is part of a larger subject, back up and search more  for general terms. Use terms related to the subject like racism, segregation, freedom.  Google will often synonymize these for you to give you ever larger scope.  Note that once you find the first item (the first cartoon), it's useful to read the text around the image to get more ideas about what to search for.  Example:  while we called them "political cartoons" here, they're also called "editorial cartoons."  Knowing about both terms can be useful.

Have an understanding of the place and time so you can focus in on dates and places in your searches. Here, we used 1961 as an important search term.

Persistence is required.  On a great topic like this, it's important to NOT be distracted by the other cartoons available.

Also, while Google Images is great, sometimes the images you are looking for might not be in a corpus that Google Images uses or has access to. Think about where the images would have originally appeared. In this instance it would most likely be newspapers and magazines. Know what archives your school and public libraries offer.

Sometimes what you think might be in a political cartoon, in this example "bus" might not be anywhere in the cartoon due to the use of different language, a different perspective, or metaphorical use of language.

A key idea is that sometimes you get caught up in trying to give Google too much information.  A good strategy (especially on difficult searches) is to use fewer search terms to help get the results you were looking for.

And sometimes it's useful to follow up your searches with the strategy of including a specific person (e.g., Herb Block, above) to find other items by that person.