Followup: What made that mark on the land?

I wanted to follow up yesterday’s discussion of the mysterious “mark on the land” (which we now know was the short lifetime of the Penninsula Channel Commander’s RC model-plane airport).

One of the most poignant memories of the old field is this video taken from a model plane of the “Old  Half Moon Bay Field” http://petej.com/blog/movies/#hmb  (Taken from Pete Johnson’s remembrance of the field which was closed and torn up on September 30, 2008.)   Here are a few frames from Pete's video, showing the field in close up, and with views up the coast.) 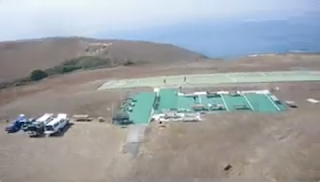 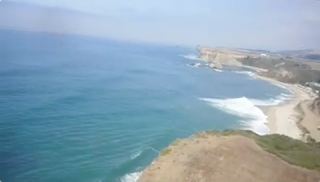 As you probably saw from all of the comments, there are multiple paths to figuring this one out.

I especially liked Rosemary’s use of Google Earth’s layers tool.  As she pointed out in the comments yesterday, the “Google Earth Community” layer can be a great source of insight.

To get to that layer, search in the Layers menu:

And sometimes you’ll find useful information there.  (Rosemary did.)

With this one hint (the name of the club), everything else becomes simple.

One trick I sometimes use in Google Earth is to turn on ALL of the layers at once (click the "Gallery" check-box) to see if I get any hits.  Note that you have to be fairly zoomed in, or you’ll get a million points appearing (which could take a while). 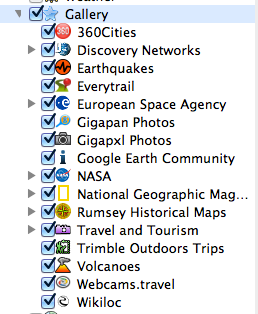 As you noticed, several people found “Gordon’s Chute”  in the vicinity of the landing strip, thinking it was what I was after.  (I was a large pier that had a chute running from the top of the cliff to a mooring point just offshore—the idea was to simplify the loading of ships with deep drafts).

Now, in truth, I hadn’t heard of Gordon’s Chute before readers discovered it.   What a remarkable thing!  Built was built in 1872 and lasted until 1885, when it was destroyed by a storm.

Be sure to see John Vonderlin (aka BenLoudman) amazing “Gordon’sChute” Flickr pages.  (Thanks for pointing this out Remiij!)  This collection of images is a superb collection of what is there now, and what once was there (with a hypothetical diagram showing where it seems to have been, overlaid on current reality).

In Vonderlin’s collection, he has several excerpts from the “San Francisco Call” newspaper, with articles dated May 31, 1896. (San Francisco Call, Volume 79, Number 183, 31 May 1896 – easily accessibly at the CaliforniaDigital Newspaper Collection. )

As you can see from their illustration (done “From life by a Call illustrator”), the chute is located on a bluff near two rocks (where the remaining trestlework stands) and near a valley (which you can see on the right side of the illustration).

The reason I bring this up… is that the site of the model airplane field isn’t quite that location.  But it’s nearby.

If you look at this picture (which I made from Google Maps), there are at least 4 locations where the Chute could have been.  The rocks near the airport are pretty sheer, and unlikely to serve as a base of the trestle.  But the rocks at positions #2 and #4 are fairly large and flat.

Since John Vonderlin had such an interest in Gordon’s Chute, I did a quick search for

and found that he’d written a letter to a blogger who specialized in the history of the coastline there.  In that post on the blog PescaderoMemories, he writes about walking up the beach to find the original site of the structure.

“Continuing to hike through the riparian corridor as it emerges into the ever-widening canyon mouth, finally see the goal ahead, Gordon’s Chute, and the wave-washed end of the looming, sheer Tunitas cliffs.”

The description makes it pretty clear that the chute rocks are near the mouth of Tunitas Creek.  We know (from the Call newspaper) that the chute was built on rocks near a bluff, near the creek.  And when we look at the map, it’s probably the  #3 or #4 rocks.  Both of which are about 1 mile south of the RC airport. 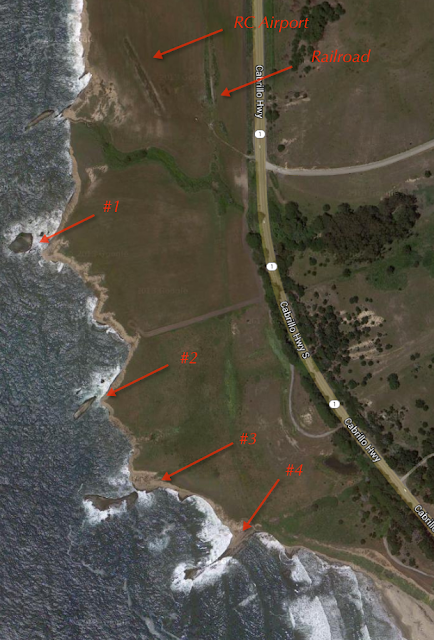 Interestingly enough, Wikimapia puts the site of Gordon’s Chute at 37°21'46"N 122°24'26"W which is the site numbered at #3 in the map above.  That makes sense.  It lines up with the illustration, and it’s a large flat rock… probably blasted into a convenient shape.

Remarkably enough, as Ramón discovered by doing a street address search, the property is for sale for $2M.  (That's actually a great price, in local real estate terms.)  The real estate listing ALSO mentions that this was the site of Gordon's Chute.

Yet another solution path was taken by my brother, Jeff, who’s a professional pilot.  As we’ve discussed before, using your social network (especially when they’re a network of people know are experts in the field) makes a good deal of sense.

He posted my question to the ProPilots (a members only) site and generated a great discussion.  The pilots were initially confused and surprised.  Many of the pilots had flown in the area, and they would have known about a runway there, even abandoned ones are marked.  Then one pilot had an insight:  “I have a few thousand hours of instruction time around that area and I don't know what it is. The runway looks pretty small though. I know there's a spot in the area where people fly RC aircraft...”

One pilot had a novel idea:  “If there are any RC pilots here, fire up RealFlight [an RC flight simulator, with many RC fields in the model] and check, I think there's a RC field in the sim that looks like that. (I'm on the road and don't have it with me).”

I have to admit that I’d never thought about using a game as an information resource!

Then, one pilot did the same thing I did and measured it on Google Earth.  “It’s only 400’ long.  Abandoned RC airfield?”

It was a quick solution after that.  They didn't take long to discuss it and figure out what the right answer was.

Search lessons:  There are many here.

First, the journey sometimes really IS the reward.  Thanks for all the ideas about Gordon’s Chute.  I wouldn’t have known about this.

Second, triangulating information (that is, getting multiple, corroborating pieces of information from different sources) is necessary when the history is old and confused.  This is what we did above by looking at maps, old photos and old newspapers.

Third, information can come from surprising places.  Social networks are one great source, but also real estate sites and even simulator games can be potentially useful sources!

Fourth, sometimes using the tools you have in new ways can be useful.  Google Earth has a number of useful, often historical, annotation layers.  Oddly, those layers are not searchable, but you can investigate them easily enough with a click.  Remember the "Show all" trick as a way to quickly browse through the options.

Excellent work by all.

Footnote:  BTW, I'll be on vacation next week, a trip that might well lead to an entirely new challenge.  Stay tuned.  If I can get to Wifi, I'll write up a new search challenge next week.  (But don't be surprised if there's just radio silence.  I might be off the grid!)