I asked a couple of questions about this mysterious statue that I'd seen somewhere, but forgotten where.

1.  Where is this statue of George Washington located?  A lat/long, street address, or building name would be enough.

2.  What happened to his cane?  Why haven't they fixed it?

3.  What's the statue that's directly in front of George?  That is, what's behind the photographer? 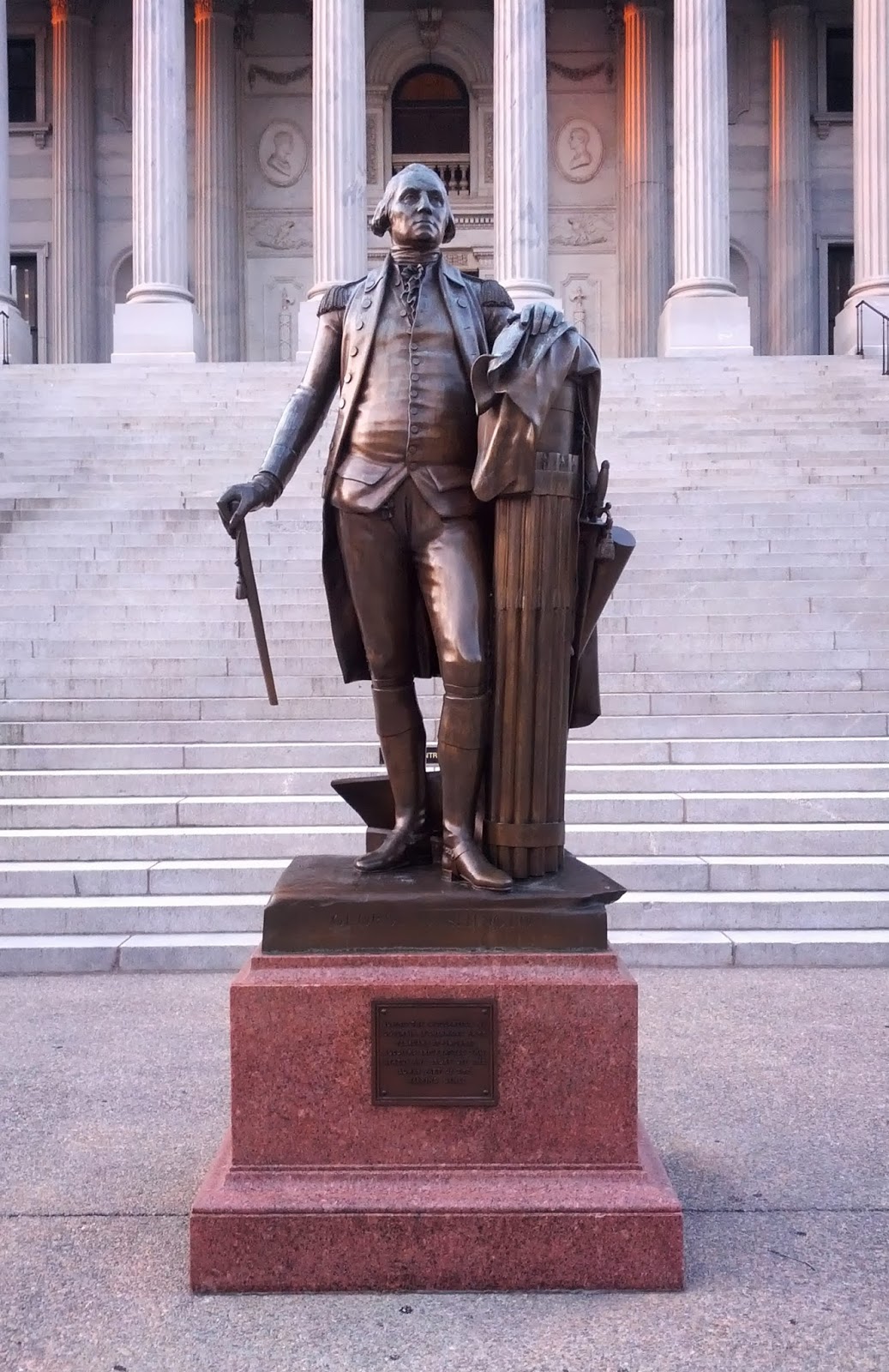 How:  This wasn't that hard--an ordinary search-by-image doesn't give you much.  But when you add in the context term south, then it
works.  There are two hits in the top row.

Clicking on those images quickly tells you where it is.  A Streetview check shows that yes, indeed, George is at the State House.

Of course, as Oodle pointed out, just a  simple Google search for

leads to web pages that tell us where the statue is located.  When 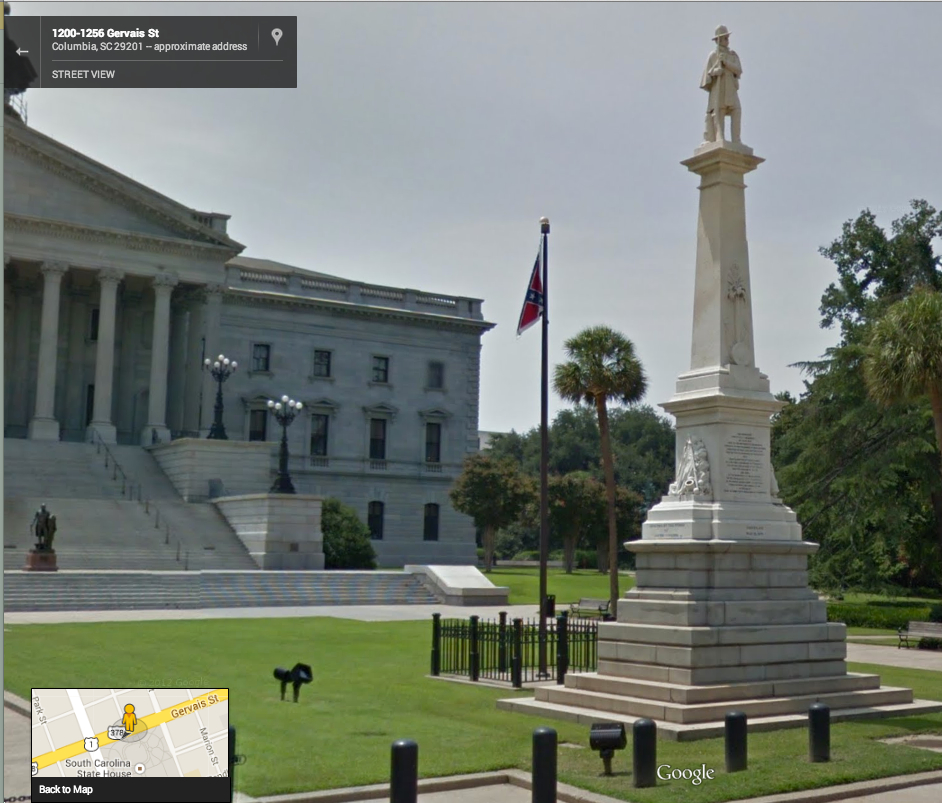 I thought at this point I'd just check the Map for this location and find the statue name (just as we did a while back with the search for the wreck of the Garden City ferry).  But it didn't work!  The statue isn't labeled on the map!

Time to switch to Plan B.  I had to think for a second:  What other services provide location-based information (especially about things like statues and other cultural items)?

Just to check, I went to Wikimapia.org and dropped in the Lat/Long from above.  Sure enough, clicking on the location of the statue-in-front-of-George revealed that this is the "South Carolina Memorial to the Confederate Dead."


I also wanted to check the WayMarking site, dropped in the Lat/Long with the search term "statue," and found (just as Hans showed) the same result.


Notice the differences in the data that's shown at the two sites.  They're nicely complementary, and give me a good sense that the monument really is the "South Carolina Civil War Soldiers Monument."  The Waymarking site actually has photos of the inscriptions--very nice for search-researchers!

What happened to the cane?

As you can see from the comments, the straightforward search quickly leads to two very different ideas about the broken cane.

Theory 1:  Cane broken during a move.  The evidence for this comes from http://scstatehouse.gov/studentpage/explore/map/confederate_soldier.html -- look at the URL carefully.  This is a studentpage.  If you go to the page http://scstatehouse.gov/studentpage/ you'll see that this is a page created for (maybe by?) students who have visited the state house.  (Note that there are no citations and very few details.  Broken during a move? This leaves me feeling suspicious.)

Theory 2:  Cane broken by Sherman's troops when they occupied the city during the Civil War.  This theory is given some credibility by the plaque on the base of the statue.

How can we get some earlier, highly credible information about the broken cane?  First, starting with the inscription on the statue ("fait Par Houdon francais 1788 W. J. Hubard's Foundry, Richmond, Virginia, 1858") This tells us that it was installed on the State House grounds in 1858 (per Wikipedia article on the statue).  This date suggests that we might be able to find a newspaper article about Sherman's attack in 1885, and whether or not the statue was affected.  My query (after a few iterations) became:

Why the -NAACP?  Turns out there was a controversy about building a screen around the statue that was done by the NAACP for a meeting on the steps of the State House.  This use of minus eliminates the annoyingly invasive results.

The first result was exactly what I needed--a report in the South Carolina Newspaper Project about the State House.  In that report, there's a section from the local newspaper, the Columbia Phoenix, on April 11, 1865 commenting that "When in possession the barbarians tried, in a petty manner to deface and defile as much as they could . . . They seem to have found considerable sport in their practice, with brick-bats, or fragments of rocks, as sharp-shooters; and making the fine bronze statue of Washington their mark, . . . a part of his cane has been carried away among their 'spolia opima.'" (As Jon, the Unknown, tells us, the spolia opima are rich spoils taken from the vanquished. And "brickbatted" means to hit the statue with bricks.)  Remember that the capture of Columbia was just 3 months earlier, so I'm tempted to believe the newspaper report as an accurate rendering.

Considering the state of the State House at the time, this story seems completely plausible.

And, why haven't they fixed it?  The sources seem to agree--as a continuing reminder of Sherman's troops excesses during the war.

Search lessons:  There are several here...

1.  There are many paths to the solution.  To figure out what the statue was, several of us used the Search-By-Image method, then followed a link or two.  But a simple search also works well. What this tells me is that when a particular method doesn't work, be sure to just move on and try another path.

2.  Not all features are on the map!  I really thought that there would be a labeled Maps feature for the statue, so I was surprised when it wasn't.  That discovery led me to...

3.  Remember other resources on the web.  I went to Waymarking and WikiMapia and both two slightly different sets of resources, both of which were excellent.

4.  Cross-check your answer.  As we saw, there are (at least) two different stories behind the broken cane. One of the results was a bit thin (even though it was from an ostensibly credible source).  The other had references (and images!) from original source documents of the time and was consistent with other things we knew about the situation.

Keep your curiosity up, even in the face of cannonball attacks!