Answer: What's the date of this globe?

I'm impressed with all of the energy and good thinking that went into solving this Challenge.  As often happens, *I* learned something along the way as well.  Good job, Researchers!

1.  What year was this globe made?

And then a bunch of pictures followed.  Here's the first one: 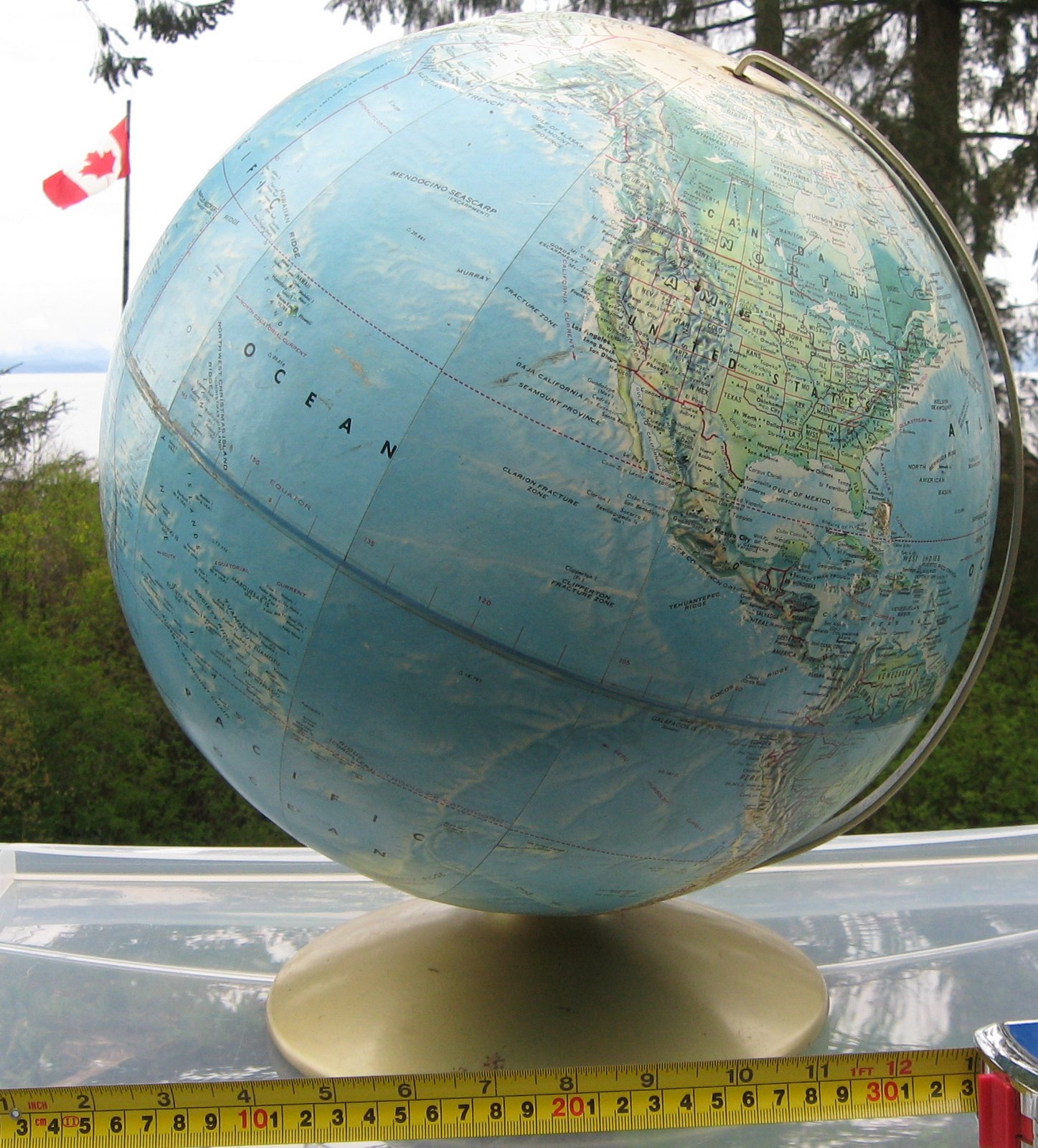 Just how will we figure out the age of the globe?   First off, I scanned the globe images carefully, looking for a date, or an edition number, or anything that would be an authoritative mark from the manufacturer.  But I (I and Jon agrees) couldn't find anything.  There's a "Copyright Rand-McNally" in the cartouche (the legend of a globe), but no date.
So I figured I'd have to start looking up countries that were shown on the globe (or not shown) as a way of figuring out what the possible range was.
The first thing I noticed was that Vietnam was showing up as both North and South Vietnam.  I knew off the top of my head that Vietnam's unification happened in 1976, but I needed to be more precise. I needed a master list of countries--when founded, and when they disappeared from the world stage.
My search was:
[ list of countries founded by date ]
This took to me a few different pages, each with a list of countries and their establishment and dis-establishment dates.
I then had to line up dates that would cause countries to appear, disappear, or change in territorial status.
1976 - North and South Vietnam unified to become "Vietnam"
1970 - "Muscat and Oman" changed name to just "Oman"
"Muscat and Oman" is on the map.  We must go deeper.  Looking at "Muscat and Oman," I noticed "South Arabia" 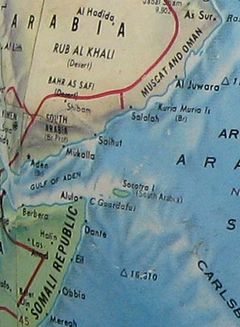 A quick search for
[ South Arabia ]
told me that "The Protectorate of South Arabia" existed as an independent country only from 1962-1967, after which it became Yemen. This is great, as it limits our searches quite a bit.  Since South Arabia was dissolved in November of 1967, the map on the globe must have been made before the end of 1967.
Right below South Arabia is the "Somali Republic."  Another search tells me that this country existed only between 1960 - 1969.  This is consistent with what we already learned.  And Socotra Island became Yememese in 1967.
I kept working in this vein, just checking to make sure all of the country labels are consistent, working upward from 1962.
1963 - Kenya created.  It's on the globe as Kenya.
1964 - Nyasaland dissolved, becomes Malawi.  Malawi is on the globe as well.
1967 - Dominica becomes a British protectorate.  It's labeled as such on the globe.

1967 - French Somaliland becomes the French Territory of the Afars and the Issas. (Which then, in 1977, becomes Djibouti.)   For this globe, on the coast near Ethiopia and Somali Republic you'll find a tiny country labeled "FR SOM"--or French Somaliland.  Since the name was changed around the end of 1967, this is a great date to use for finding map time boundaries.
1968 - Equatorial Guinea, Mauritius, and Swaziland all become independent. HOWEVER Swaziland and Mauritius are still marked as British, but Equatorial Guinea is shown as independent.
1969 - St. Vincent and the Grenadines become independent, but the globe shows them as British. This also suggests that the globe is probably pre-1969.

This pins it down pretty well to 1967, with a little room for error.  The uncertainties in dating (e.g., Swaziland being marked as British) probably stem from the globe production cycle, and concerns over disputed territories.  Who knew if they'd stick around for another couple of years.  This is great for globe makers (countries change--everyone needs a new globe!), but they also would like to put out globes that are accurate for a while, hence the hedging.  The side-effect of all these country names makes relying just on country name changes a bit problematic.  It'll get us within a year or two. So we really need a second source on this.

METHOD 2: It struck me that this globe didn't seem to have any kind of edition / version or date on it.  Isn't that strange?  So after I did my first method, I started over again with the query:
[ world globes publication dates ]
(Why "world globes" in the query?  A: Because the term "Globe" is frequently used as a company name.  Using the bigram "world globes" was the way that I thought I could avoid all of the companies, and I was right.)
I found (like a few other readers) that there are sites dedicated to putting dates to globes.
https://www.antiquemapsandglobes.com/ - run by Murray Hudson offers a nice search tool to (guess what!) search for globes.  Here's their search interface with what I entered for search terms. 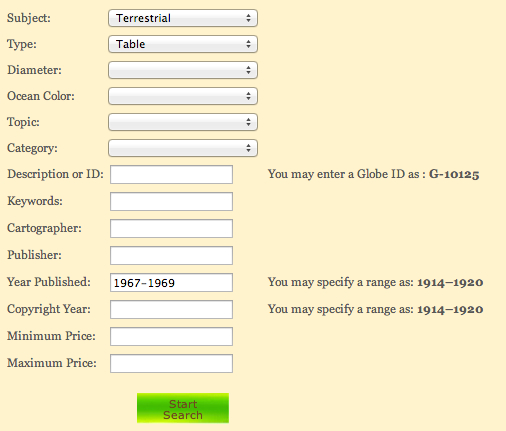 I just put in what I knew about the globe (terrestrial, table globe, date range of 1968-1969) and did a search.  Found it!  It's exactly the same globe, down to the code in the cartouche. (Cycle through their images until you find the cartouche--the code is the same.) 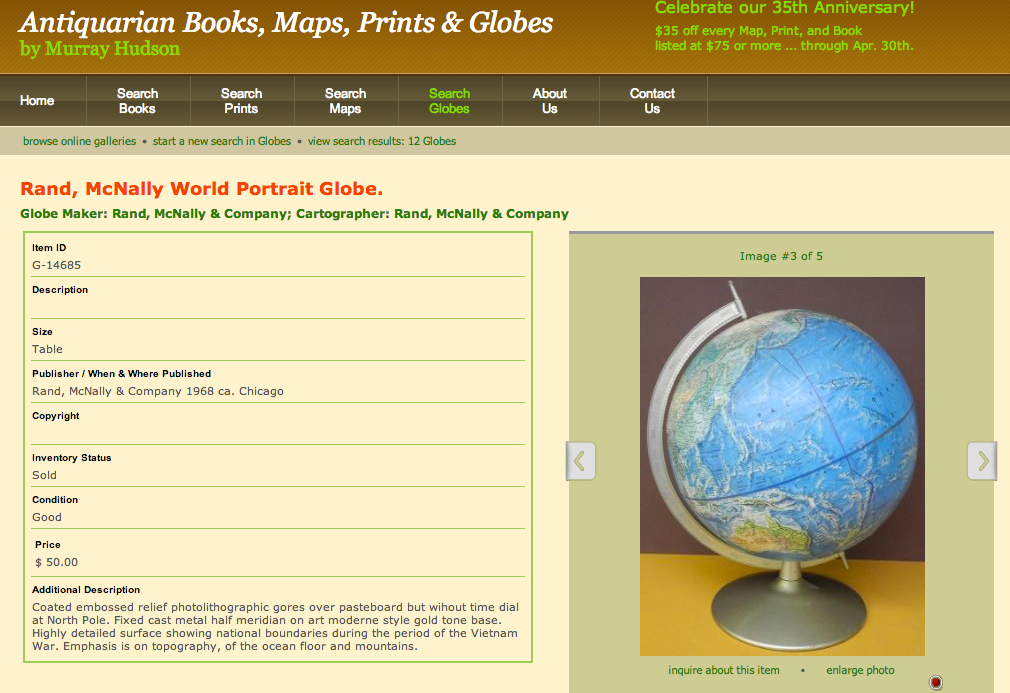 David Mackinder's method:  David did an smart thing and looked for map and globe search tools.  That's a great move.  He found the Biblioserver Newberry search tool.  Using that he treated the code on the fourth picture as if it was a book's ISBN, and entered 'A-110000-751 -2-2-5.4' into search field, to find a hit in their index.
That's a great trick, but reading the entry carefully, it says that it is: "Dated 'c.1964' in manuscript on attached tag."  That c. means "circa," which is just another way of saying "I'm not really sure, but approximately this time."  I guess 1964 is c. 1968!
There are other sites for dating old globes, and they're great fun to explore.  Bear in mind that it's really worth checking multiple resources

Search Lessons:
1.  Communities exist--take advantage of them.  I honestly didn't expect there to be such an active and vibrant community of people who deeply care about older globes.  But there it is.  Lesson for us all, as my friend Leigh Klotz said "This is the Internet.  There's a group of people interested in every possible topic."  What's more, they write about their topic of interest.  Remember this when doing research on obscure topics.  There are always people who know more than you do.

2.  Second source everything. The method of looking for country-name-changes is pretty good, but it's not super precise, and got us only within a year or two. By using the names + dates on the globe, and then looking for other sources, we were able to find exactly the globe's publication date.

3. Try searching for collections that might have a description of the thing you seek.  A final note on this topic... an avenue I discovered, but didn't have the time to pursue...
One of the searches I did was for the Rand McNally sales catalog.  The obvious search:
[ Rand McNally catalog 1964..1968 ]
led to a remarkable find:  the collected documents of the company in the archives of the Newberry Library in Chicago.   http://mms.newberry.org/html/RandMcNally.html
It's pretty clear that there ARE catalogs from 1964 through 1968.  A quick glance through those would satisfy our Challenge.  (If anyone happens to be close to the Newberry Library, could you take a quick run over there?)
Thanks to everyone for all of their wonderful searches.  The SRS community is full of fun, interesting people that makes writing these challenges a joy.  Keep it up!

Search on!
(Thanks again to Jon (the Unknown) for this great SearchResearch Challenge.  If YOU have a great challenge, write to me with it.  We just might try to solve it together.)

April 27, 2014 - Made a few edits to fix up typos. As Remmij points out in the comments, I switched around a few of the dates.  Today I fixed that up, making the dates consistent with the prose. And I added the text about French Somaliland.