If you're like me, you'll sometimes notice something in your environment and wonder, "What's that?"

Recently I noticed a bunch of unmarked cameras on top of light poles at traffic intersections near where I live.  Suddenly, it seemed, every intersection with a traffic light suddenly sprouted a camera that was pointed at each lane of traffic.  A three-way intersection has three cameras, a regular four-way intersection has four cameras, and so on.  (To be honest, when I check archival Streetview images, I see they've been there for at least 7 years, so this isn't a new thing.  But I JUST now noticed them.  And when I ask people about the cameras, 9-out-of-10 people say "what cameras"?)

Initially I thought these were for visual traffic detection, something to replace the big loops of wire that detect when a car pulls up to the stop line.  But that didn't seem to make sense because I saw maintenance folks still fixing the loops.

I did a little poking around, and it seems pretty clear that these are not red-light violation detection cameras.  (Or if they are, nobody seems to be getting tickets, and it's a huge waste of money!)

So the question is, what are they?  That's today's Challenge.  And I have to tell you that I do NOT know the definitive answer to this Challenge.  (I think I have a good idea based on my searches this week, but I'm not 100% sure.  We'll work this one out together.)

1.  What are these cameras doing?

2.  Who owns (or installed) the cameras?

3.  What happens to the images being captured by the cameras?


Here are 4 fairly high-quality images that I took just last week.  From this information, can you figure out the answers to the Challenge questions?   (You can click on these images to get the full resolution original file.)

Here are a bunch of images from Streetview of nearby intersections. 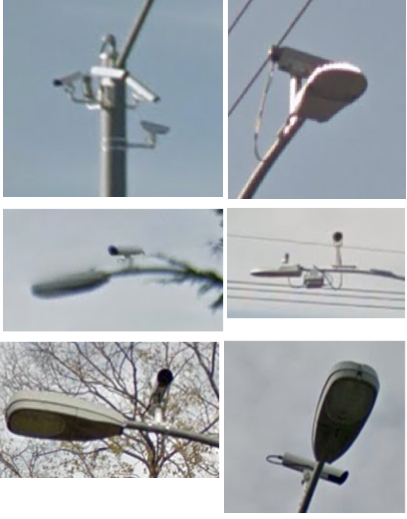 It strikes me as odd that this major infrastructure deployment (cameras on EVERY streetlight) was done without any obvious announcement to the public.  Of course, it's possible that I missed the news item, but this seems fairly... well... odd.

Can we figure out what these cameras are doing?