Because of a note written in haste, I found myself having to do research on my own note.  (Comment to self: Write clearly in the future!)

In any event, this rapid scrawl gave rise to some interesting questions.  It's actually just three little questions I found myself researching this week.  Can you solve these questions too?

1.  As I mentioned, I'm getting better from my illness rather slowly.  Little by little, I'm getting back to my normal self.  Now, as I write to you, I realize that there doesn't seem to be an English word to describe this... or is there?  Can you find a single English word that describe the process of a long, slow, restoration to normal health?  What's that word?

2.  Can you help me figure out what the name of this fish really is?  While lying in bed, I was looking over my scribbled notes from the Fiji trip.  One of my notes captured something one of my dive buddies said.  (See image above.) My handwritten memo says, "Check out the NeoclXXXX YYYYYYY when you get home. Cool fish."  It doesn't actually say XXXX YYYYY, but those are the characters I can't read in my scrawl. It's clearly the Latin name of the fish, it's just that the second half of the first word and the entire second word is illegible.   My dive buddy said it has a truly memorable common name, if only I could figure it out.  What is it?

3.  As I was thinking about these things, I started to worry about the future of the corals all around the planet.  As you know, they're under some environmental stresses that are causing worldwide declines.  I wanted to read something about them, and thought that what I should do is to search for an article that talks about coral in the "future perfect" tense.  (That is, a sentence that describes an action that will be completed in the future.)  Can you find a sentence that is in the "future perfect" tense that's all about the state of coral? (HINT:  Don't just search for coral and then start scanning.  Remember what I've told you about problems like this--when it seems crazy hard, look for WHAT first?)

1.  "A single English word that describes the process of a long, slow, restoration to normal health?"

In this particular case I turned to an expert, my friend Erin McKean (a dictionary evangelist who is a  dressmaking, roller skating lexicographer of enormous wit, style, and wisdom).  She wrote back that the word I was seeking is

which she found by "...doing a reverse dictionary search on the Historical Thesaurus of English (which is paywalled as part of the OED) and looked for the word 'recovery' there."

That was a brilliant move.

The word she found,  lysis, has two meanings.  Here's the definition from Google, which you get by doing the query [ define lysis ]: 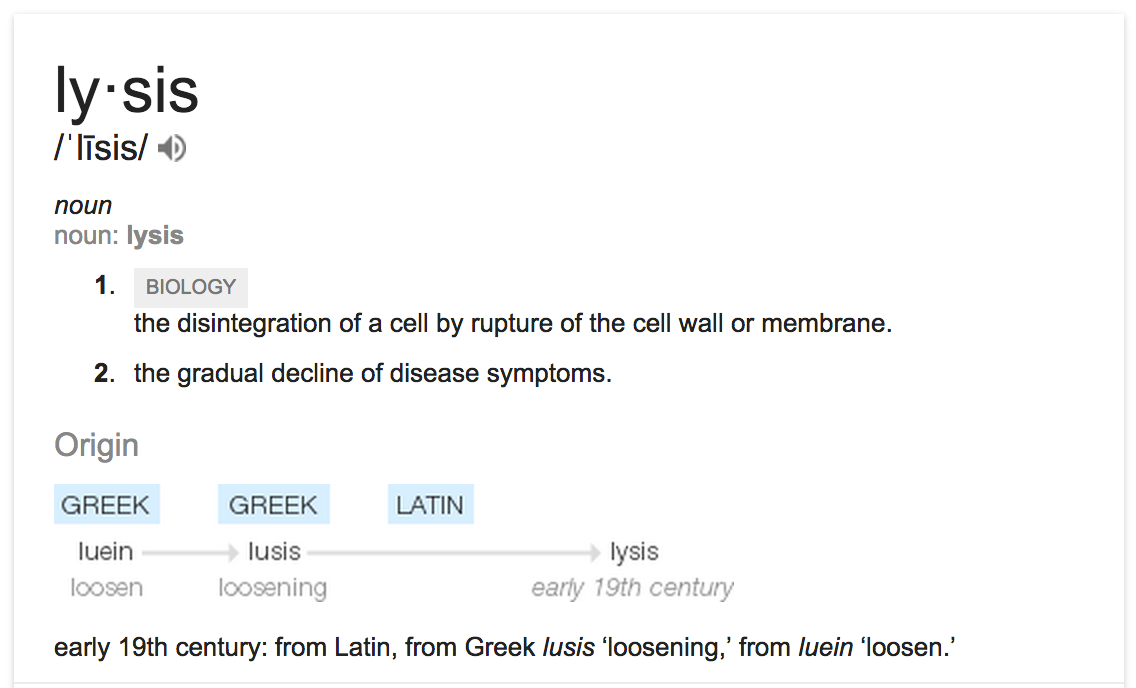 I didn't want to spend any money doing this search, but I went to the HTE site and discovered that that have a subscription service.  Curious, I clicked on the link and found that you can use your library card to login.  (Assuming that your library subscribes.)  Just on a lark, I tried my local library card number (for the Palo Alto library system) and it just worked!  Amazingly enough, I have complete access to the OED subscription service, including their reverse dictionary application, just as Erin described.

Here you can see that I did a query for [ gradual recovery ] in OneLook reverse dictionary, and found that the first word was "lysis."

As several people noted in the comments, "convalescence" is also a good word to describe a slow recovery, but the definition of the word doesn't actually include a sense of lengthy and slow (you can have a rapid convalescence), whereas lysis actually does have a slightly deeper sense of slow and gradual.

On the other hand, lysis is such a rare word that few people will understand your clever and subtle semantics, so maybe "convalescence" is actually better for the majority of cases.

2.  Can you help me figure out what the name of this fish really is?  While lying in bed, I was looking over my scribbled notes from the Fiji trip.  One of my notes captured something one of my dive buddies said.  (See image above.) My handwritten memo says, "Check out the NeoclXXXX YYYYYYY when you get home. Cool fish."

One of the important skills of answering questions like this one is to understand exactly what's being said, and what's being asked.

Lots of commenters kept looking for fishes from the area around Fiji.  But if you read carefully, I was lying in my bed at home, looking at my notes from the Fiji trip.  Clearly, the note was written while in Fiji. BUT the unstated bit of background information is that we had been talking about fish in general, not necessarily those from Fijian waters.  (And in truth, in this particular case, we'd been talking about fish that live in the sea off the California coast. But you couldn't know that unless you were there.)

In any case, the challenge is to find a Latin name of a fish that's shaped like this:  NeoclXXXX YYYYYYY  That's all we know about it.  (Oh.. and the common name for it is pretty interesting.)

In this case, I don't know of any search engine method that would work (Google, Yahoo, Bing, Alpha... it doesn't matter, none of them do this kind of within-the-word analysis).

We need something that has tools for doing wildcards within the word.

A wildcard is just a way of specifying a pattern that the tool should match.

There are two common kinds of wildcards:

*  - the asterisk is used to match many characters.
Example: dog* will match dogs, doggerel, doggy, etc.

Now we need to know (or search out) a tool that does this kind of wildcarding within the word.

Once again, I turned to the OneLook dictionary service, because they have exactly this kind of thing.  (For dyed-in-the-wool SearchResearchers, I suggest you read their FAQ page which tells you all of the wonderful things they support.)

To solve this Challenge I went to OneLook and did this:

The first asterisk after "Neocl" means to "show all completions of that word."

The second asterisk means to show "all words that follow any completion of 'Neocl*'."

When I run the query, I get this as the SERP: 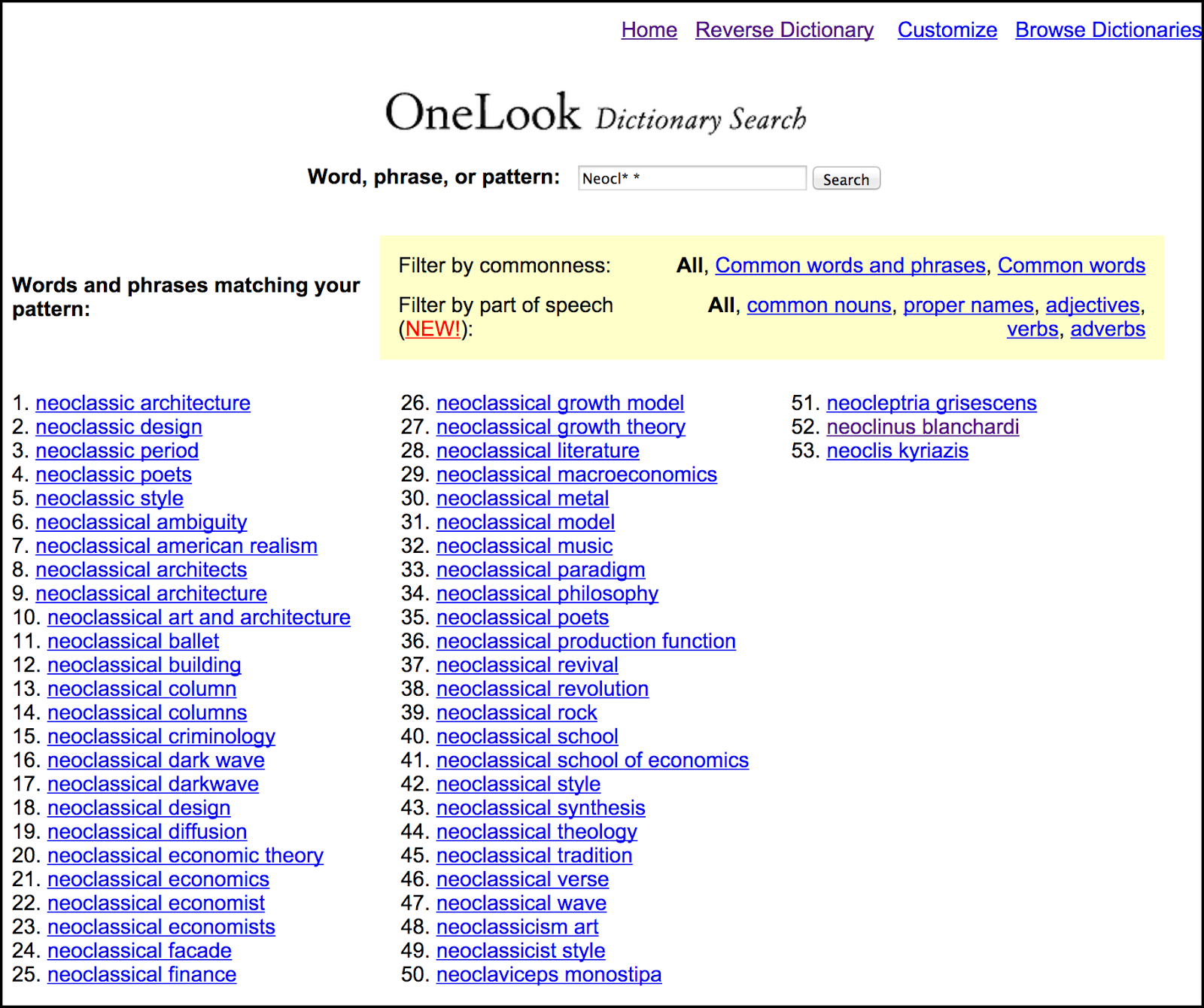 As you scan this list, you'll see that phrases 50 - 53 look like Latin names of animals.  A few quick clicks show you that Neoclaviceps is a kind of fungus, Neocleptria is kind of Australian moth, and Neoclinus blanchardi is a "is a small but ferocious fish which has a large mouth and aggressive territorial behavior..."  And it has the remarkable name, Sarcastic Fringehead.

That's it!  This really is a remarkable animal.  Here's a YouTube video that gives a great look at this Californian fish.

Here's an example of using the ? wildcard in Onelook.  My query is

which means "show me all of the words that start with 'catal' and then have exactly 3 letters following that prefix."  Here's the answer: 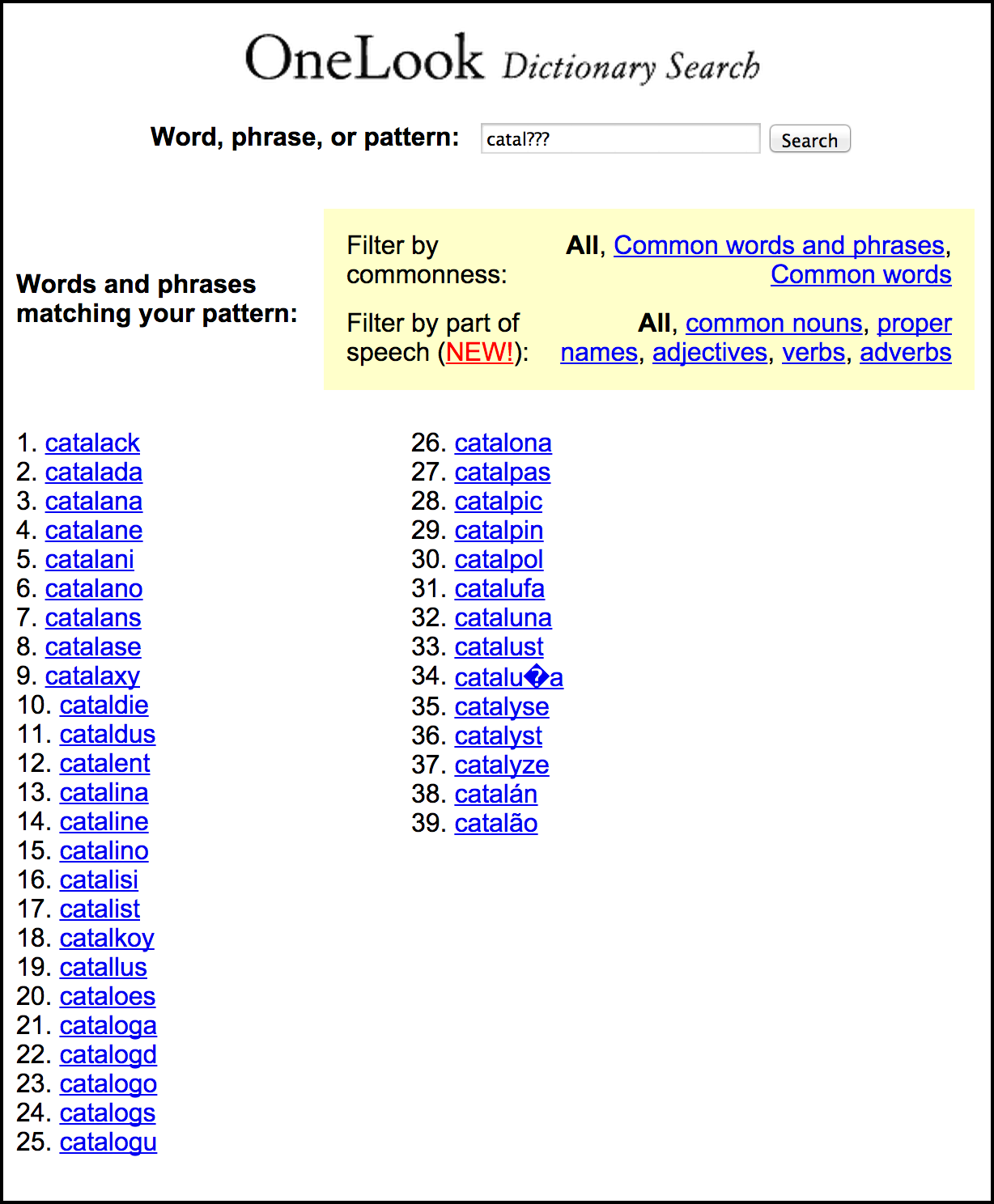 (That funny diamond/question-mark at number 34 is an improperly rendered ñ character.)

the answer is that I wasn't sure of exactly how many characters there were following the "Neocl" nor how many characters were in the second word.  If you use the * symbol, it will match any number of characters.  But if you guess wrong with the number of ? marks in your query, you'll never find it.  So I went for the more general query that would certainly include the results, rather than going with the hyperspecific ? query symbols.

3.   Can you find a sentence that is in the "future perfect" tense that's all about the state of coral?

My hint was to "search for a tool" that can do this.  I searched for a bit and found Fraze.it

Fraze is described as a "search engine for sentences."  It really is a collection of sentences that have been parsed for part-of-speech (such as nouns, verbs, adverbs, etc.) and the tense of the verb.

If you go to their page and check out one of the examples, it's pretty clear to see how to find sentences written in the future perfect tense, and then it's clear how to do a query like this: 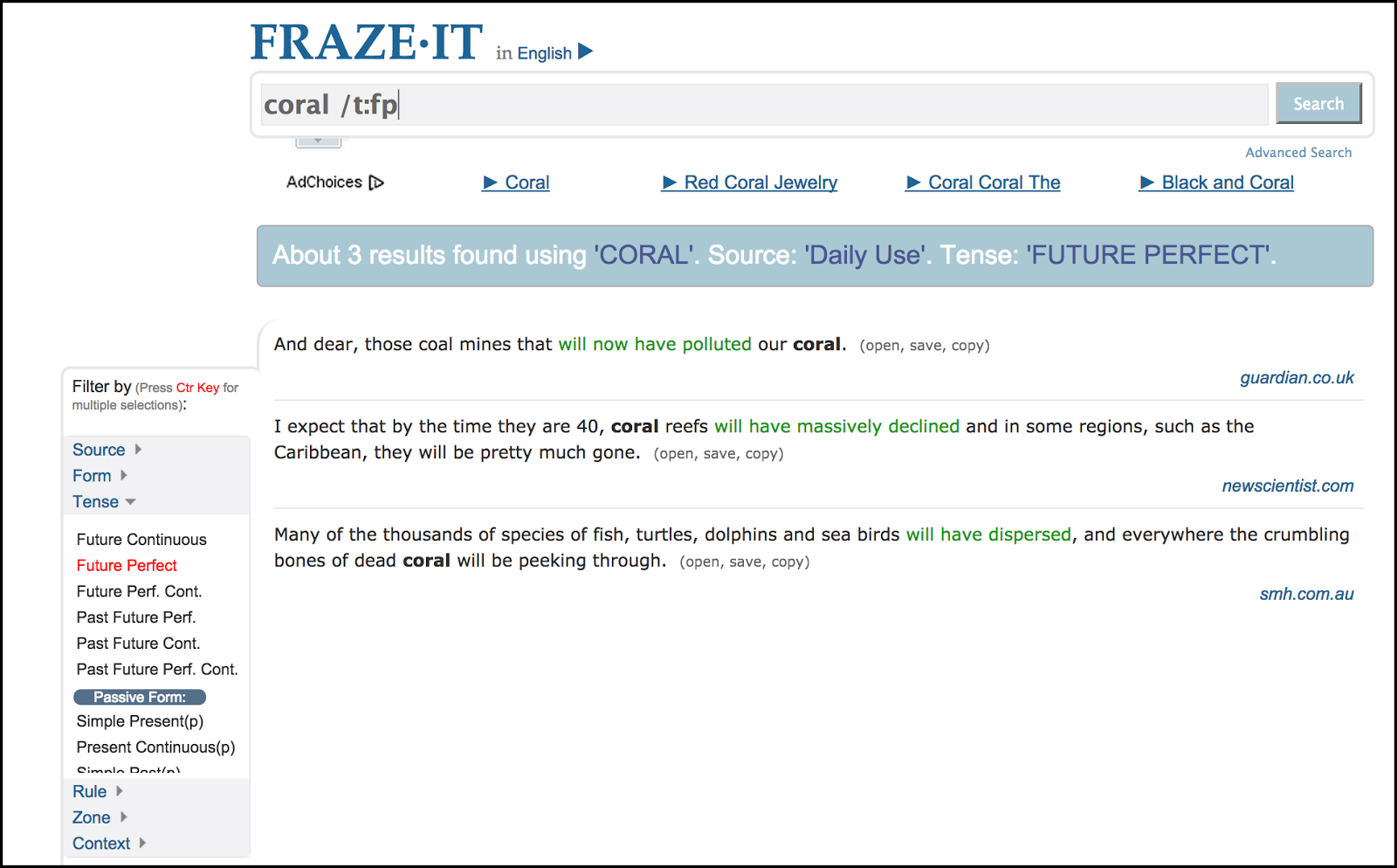 They use a fairly sophisticated sentence analysis and tagging tool that you can query using the query-building tool on the left hand side of the display.

If you're at all interested in language, this is worth spending some time learning.

I hope these questions made it clear that there are tools (OED, OneLook, Fraze.IT) that are much better at dealing with language details than the major search engines.

So why don't Google (et al.) offer these kinds of operations?  Because it's really expensive to do this for the entire web content.  Dictionary services and "phrase services" (like Fraze.IT) can do this kind of detailed analysis because they operate over a relatively small amount of content.  They build very sophisticated indicies of their content--tagging each word in a sentence with its part-of-speech, for example--and then provide search interfaces that let you search-inside the structure of the dictionary entires, or the syntactic structure of sentences in their collections.

And to return to our first question and its framing.. One of the most important skills to develop is a sense of what is being asked.  Lots of people got stuck on finding the fish that lives in Fiji, when I never said that was a constraint.

This kind of determination is obviously best done in person.  That's what a librarian does when doing the "references interview."  It's that sometimes subtle back-and-forth to determine what the question asker really means, and what kind of an answer they're really looking for.

This is a skill that's discussed in great depth in the book Reference and Information Services: An Introduction  by  Richard E Bopp, Linda C. Smith (eds.)  (2011)