Answer: Where are these places?

Once again, I'm impressed with the search savvy of the SearchResearch Irregulars!  Nice job.

Obviously, I'm here, looking at these places in real time, but here's what I would have done, if I'd been somewhere else...

1.  What is this strange obviously artificial waterway?  Did it serve any particular function?  If so, what?


I would have just dropped this coordinate into Google Maps; that shows this.... 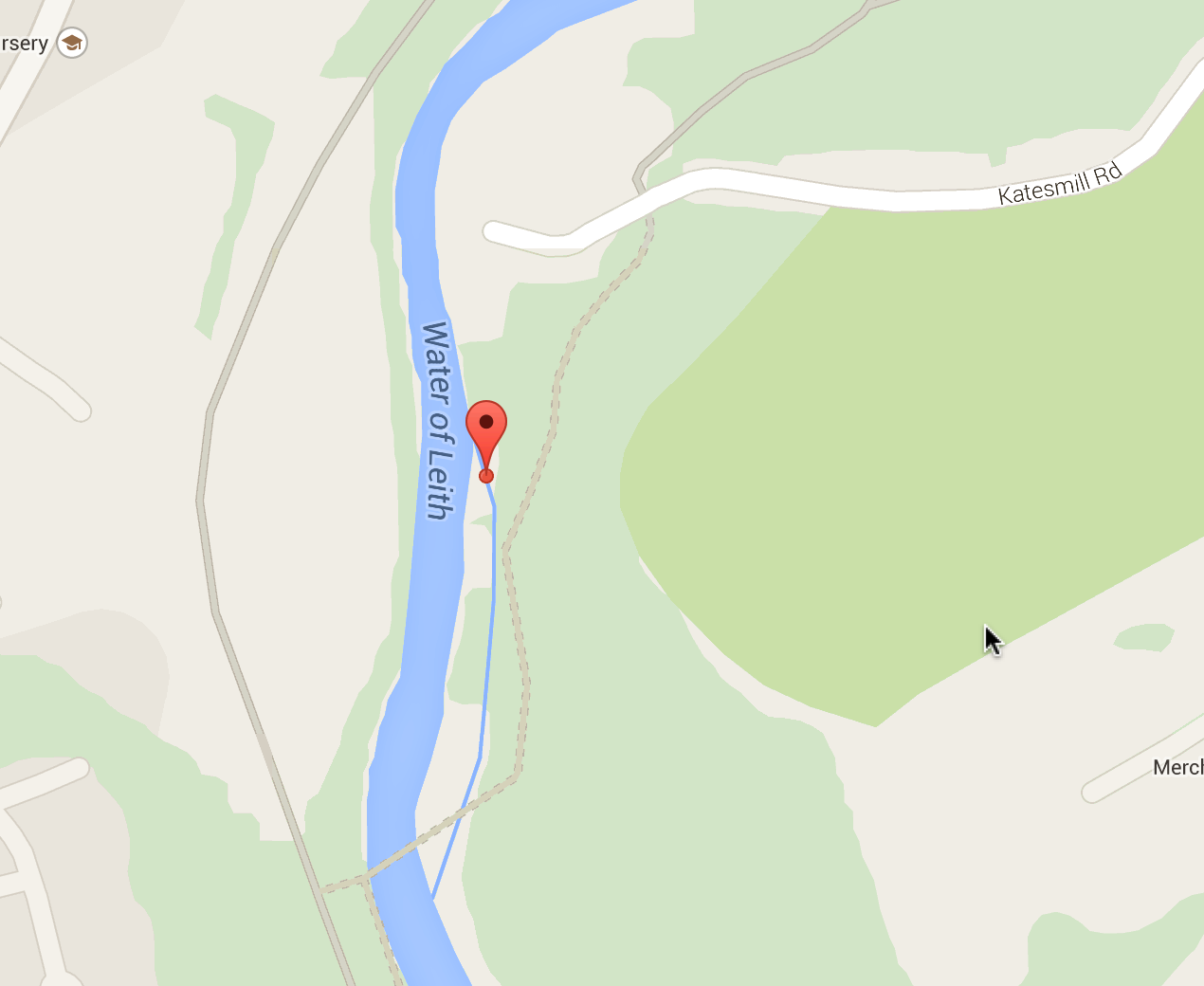 If you've seen enough maps, you'll recognize this as a flume (or mill race) that's diverting water from the river (in this case, the poetically named "Water of Leith") to turn the wheel of a mill.  Another clue can be seen in the name of the road at the top right--"Katesmill Rd"--I'm willing to bet there's a mill here.

If you switch to Satellite mode view, you can see something even more telling.  Scan up-river from that point on the flume, and you can just barely see the suggestion of a weir (that is, a low-dam used to hold back water to feed the flume).

By switching to Google Earth, I was able to go back in time and get a clearer view of the weir. (You can see the riffles in the water below the weird.) 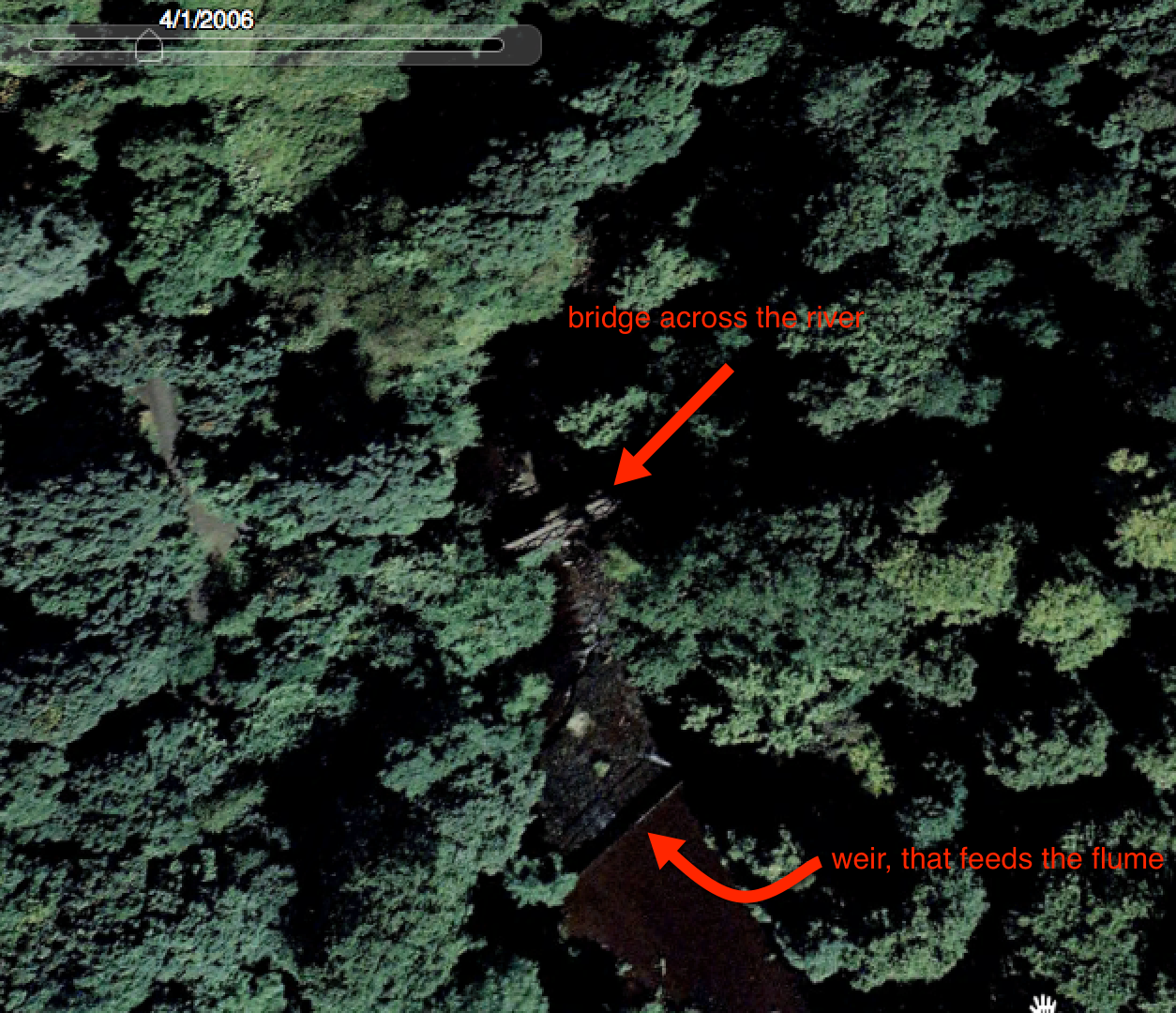 Another way to check would be to search for:

And you'll quickly find an official City of Edinburgh map that shows the flume at that location, along with a few history sites that tell us there are actually a couple of mills there--Kate's mill, originally a waulk (or fulling) mill was converted to a paper mill in 1653. It was remodelled in 1787 and then renamed Kate's Mill. 1832 it was owned by Alex Cowan and Son and there is now a private house on the mill site.) Redhall Mill, on the same flume started operation in 1718 making paper for banknotes. In 1742 the mill changed to the production of barley and later became a plastics factory. In 1970 Redhall Mill was converted into flats. (All this information is from the Sapphire project to collect Scottish mill history.)

Here are a couple more images to show you the ground truth at this site. Here you can see an old mill wheel on the flume.  A date engraved on the bridge (from which I took this picture) is 1839.

And just so you can correlate the above aerial image with a view of the weir from the ground, here's the weir.

2.  The church shown below is associated with a famous writer.  Who is the writer, and what's the connection?  (If you're feeling on top of your game, what's the tree on the right of the image got to do with the right?)

Again, for this I'd turn to maps.  Since you know I didn't run very far from the flume (all the pictures were taken within a few minutes of each other), the simplest way to track this down is to check out the map and search for churches.

All I did was zoom out a bit and look for the church symbol.  The Colinton Parish church shows up at the bottom of the map, only a few hundred yards away.

Alternatively, you could zoom out just a bit and do a search for: 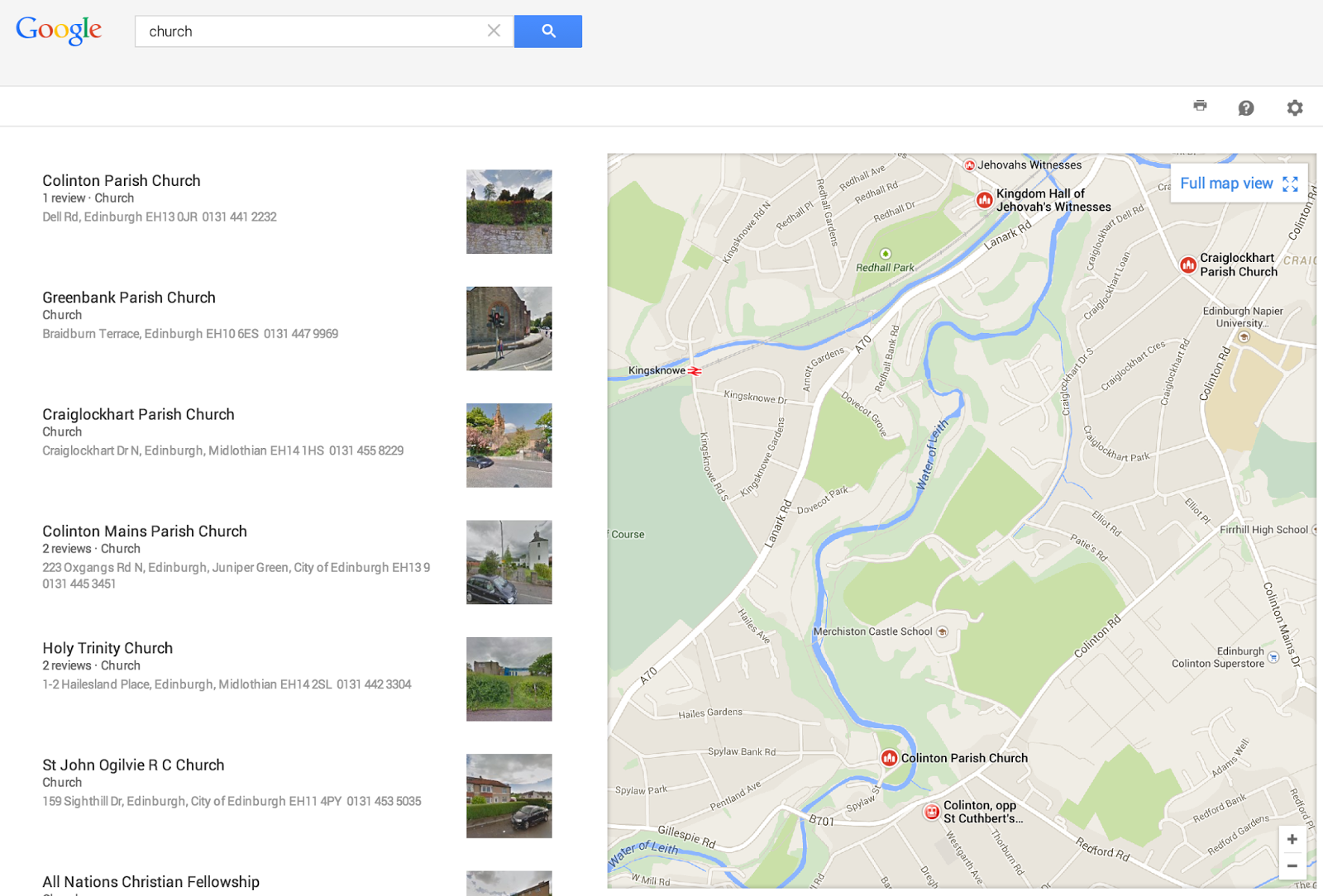 Clearly, the Colinton church is closest.

The association with a writer?

leads us to many articles linking the famous novelist Robert Louis Stevenson with Colinton and this church in particular, since he spent many summers in Colinton when his grandfather was the parish minister.  What's more, reading a bit farther down in the SERP, you'll find that a statue of RLS was set up just outside the parish church gate. This is also available on SteetView, BTW.

And the tree?  It's a yew treet (which the sign behind RLS says).

quickly shows us the web page for "The Swing" which is the cafe in the courtyard of the church.  So named, as their web page says,

"The name The Swing Café was inspired by a poem by Robert Louis Stevenson whose grandfather had been the minister at Colinton.  Stevenson wrote the poem about the swing in the manse garden where he had played as a child.  The location of the swing can be seen, outside the Dell Room window, in the old yewtree."


By now you can tell that a search for:

will tell you everything you need, including links to Flickr pages with photos of the tunnel (not taken by me) that describe it as being 153 yards long.  I double-sourced that just to check, and yes, all of the other pages describe it as between 153-154 yards (140.8 meters).  This railway was central to the expansion of Edinburgh out into what is now the suburbs.  (And FWIW, gave easy access to the mills along the Water of Leith.)

Hope you found this an interesting Challenge.  There are a couple of insights here as well.

1.  Learning how to recognize features on maps is still a useful skill.  That thin blue line next to a river is a dead giveaway of a flume.  (See if you can spot some others in places you might know about!)

2.  Remember to check the satellite views AND the archival Google Earth images.  Only one of the images actually shows the weir.  It's a fairly deep gorge, and Edinburgh is pretty far north so many of the pictures only show shadow.  Check other sources.

3.  The Maps list view is sometimes a very handy way to see a large number of hits on a single map.  Check out this view of the coffee shops of downtown Boulder, CO.  Where would YOU go for coffee??


And... because I know you're wondering, here's the poem that was inspired by the yew tree in the courtyard of the Colinton Parish church.


How do you like to go up in a swing,
Up in the air so blue?
Oh, I do think it the pleasantest thing
Ever a child can do!

Up in the air and over the wall,
Till I can see so wide,
Rivers and trees and cattle and all
Over the countryside—