Here's the Challenge for this week:

The ideal answer will give a link to a photo, along with a year, and a description of what you did to find it.

Here's what I did.
After doing all of the "obvious" searches (e.g.):
[ Don Norman 1900..1997 ]
nothing much seemed to work.  I did some searching in Google Images, even Google Books, hoping for an author's photograph from one of his books.  But that didn't work out either.
So I thought of looking for photographs that were of the various groups or projects that he was associated with over time.
I know that people in organizations love to document what they've been doing, and will often post images of themselves at parties, meetings, or conferences as a way of documenting what they've done and celebrating their times together.
But how would I find out what groups Don had been a part of before 1997?
I also know that many writers and academics post a biography of their work. It could be called a bio or a resume or a Curriculum Vita  (sometimes shortened to CV).
A quick search for:
[ Don Norman curriculum vitae ]
led me to his CV, which conveniently lists all of his books, papers, projects, and (most importantly) the groups with which he's been associated.
Working from the top, it's an impressive list of places (Neilsen/Norman; Northwestern; IDEO; UC San Diego; KAIST), and organizations (National Academy of Engineering; multiple university boards;  International Journal of Design...).
I thought what I'd do is to search for photographs with each of those organizations--but I excluded any that he had joined after 1997 (luckily, that eliminates a lot of them).
My search pattern was something like this, where organization is a variable term:

and then I just plugged the different organization names into the query.  I tried a bunch (Northwestern, "Cognitive Science Series" and so on, just reading them off his CV) and was having no luck until I got to SIGCHI.

This is the "Special Interest Group on Computer Human Interaction").
The result of that query:
[ "Don Norman" OR "Donald Norman" photograph SIGCHI ]
is: 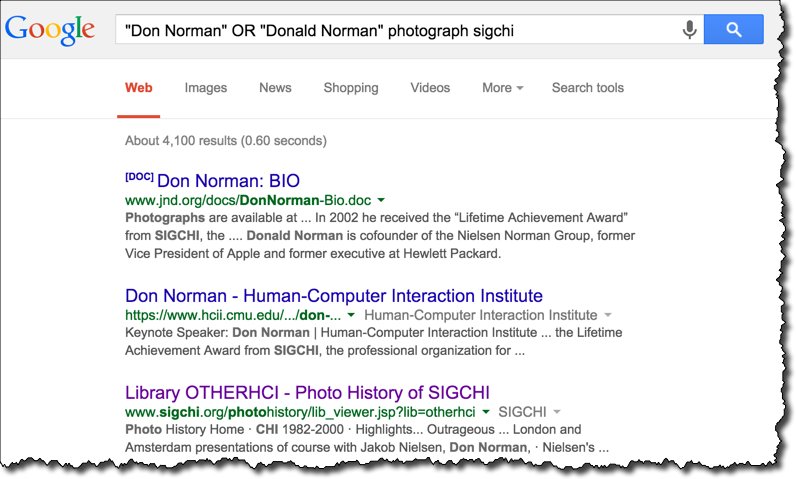 As you can see, there's Don's BIO, a link to the Human-Computer Interaction Institute, and then -- a huge hit! -- a link to the "Library OTHERHCI - Photo History of SIGCHI."

I figured this looked good, so I clicked on it and landed at this page.  I filled out the search box with "Norman" (I used his last name because it's a fairly uncommon name, and pretty likely to match any images tagged with his name.) 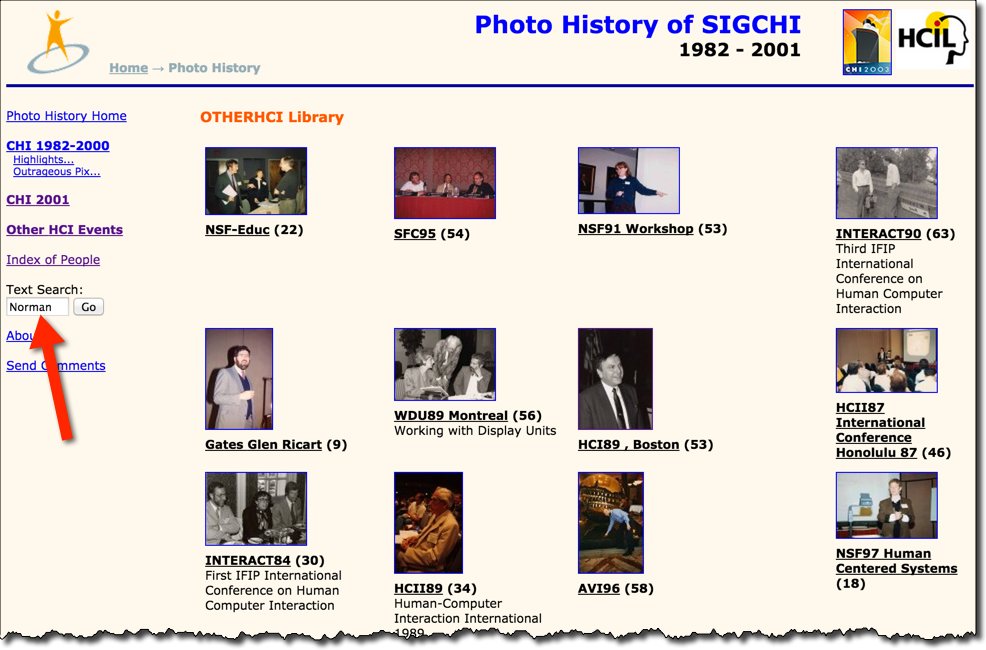 There are only a few hits--two of which turn out to be gold mines. 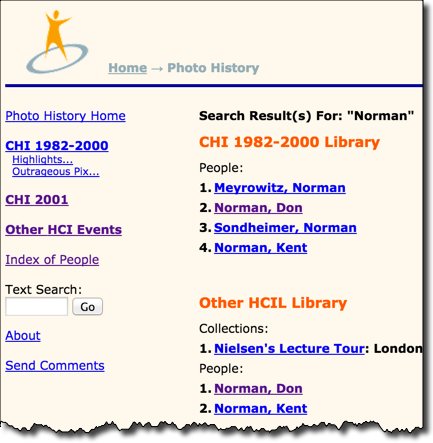 Here's the giant archive with LOTS of photos of Don from 1982 until 2001.  As you can see, many of these photos are in black and white!  They satisfy the search target easily.

From this source, it's pretty easy to find pictures from the '80s:


As many SearchResearchers found, there are many low-res images of Don from his Voyager CD ("Defending Human Attributes" 1994).  There are even several YouTube video extracts from that time.


I have to admit that my favorite solution was Fred's incredible find--Don's picture from the Freshman book page, MIT, 1957.  Fred is correct:  There was, once upon a time, a Don Norman without a beard. A very nice find.  (I shoulda thought of that!) 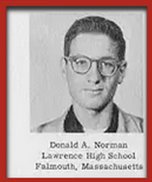 Search Lessons:  There are a couple of key lessons to learn here:

1.  When searching for information about someone, it's often useful to approach the search as a problem of finding that person in the context of a group.  That's because groups often put up lots of information (and photos) about themselves that individuals don't.

2.  Finding a resume is a great way to find the backstory of someone.  In this case, the resume (aka CV) told us what groups he was part of over time.  This gives you a bunch of additional clues about what to seek.

3.  Stick-to-it-tiveness matters.  In this case, I figured that the "search for Don in groups" would work, so I kept at it for a while.  (For the record, I spent around 20 minutes before I found the photo collection.)   It's always difficult to know when to give up, but I had a strong belief that someone would have posted some pictures of Don from one of these organizations.  If I didn't know that Don was such an active participant in these groups, I might have given up earlier.  But gumption does make a difference.  Hang in there!

Hope you enjoyed this week's Challenge. It was definitely a Challenge!

Many thanks to Don Norman for the idea AND the permission to use him as our test subject.  You can check out his entire web site (and buy his books) at Don Norman's home web site.