Answer: Questions you should know the answer to


None of these are especially tough...

... but they're all small things that you'd think you would have learned along the way.  But somehow, there's no course to take in this.

1.  You're driving a rental car and driving into the gas station. How can you tell (without getting out of the car) on which side the gas cap is on?  Is it on the left or the right?  (It's really annoying to have to get out of the car, walk around, and discover it.)

The answer is obvious, once you know.  But I had to look it up.  Here was my query. 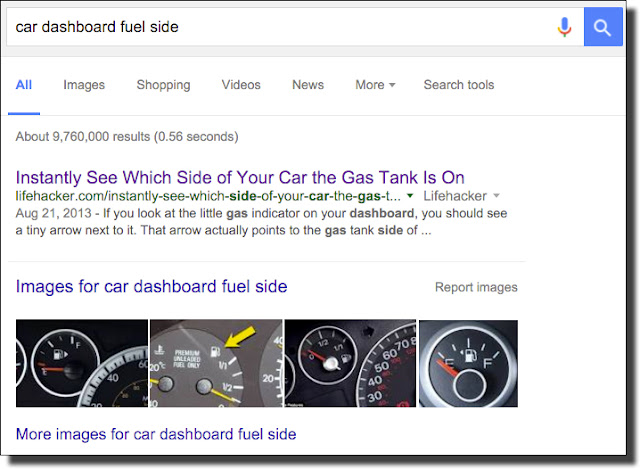 Interestingly, this also led me to a Snopes.com article asking if the gas cap side was indicated by which side the pump handle on the ICON was on.  I hadn't thought of that.  But no, it's the triangle that points to the correct side.

(BTW, what's the correct term for that part of the car where the gas cap is located?  What's it called?  By doing the query [ gas cap diagram ] I ended up finding out that the gas cap is on the "fuel filler hose" that leads to the fuel tank. Another term I didn't know!)

My query:  [ Mount Rushmore original design ] led to a number of sites, all of which pointed out that the original design was as shown in the photograph below.  Of course, it was also going to be at a different location (at the "Needles," not far away), and Jefferson was originally supposed to be at Washington's left, until they found that the rock there wasn't suited for sculpting.

3. How do you know which is the "right" side of a towel? (Yes, there's a right side and a wrong side.  Have you been doing it wrong all these years?)

Yeah, who knew?  But my query was [ towel right wrong side ], which found many articles telling me that side with the long loops (and therefore more surface area) is the side meant for drying.  The side with the short loops is meant for everything else (maybe sitting on the beach).  As with many things like this--use the side you like...  Enjoy.

4. People keep saying things, but I don't know what they mean!  What does “one fell swoop mean”?

Again, the search is easy, but finding the answer at PhraseFinder tells me that it means "a sudden action" and comes from Shakespeare's play Macbeth.  The original use was in this big of dialog:

MACDUFF: (on hearing that his family and servants have all been killed)

All my pretty ones?
Did you say all? O hell-kite! All?
What, all my pretty chickens and their dam
At one fell swoop?

The "swoop" is when a raptor (such as the "kite" mentioned in line 2) makes a sudden, rapid descent from on high, usually called a "stoop" today, the stoop is the way raptors stun and kill their prey.  "Fell" as an adjective here just means "evil" or "fierce."  Today, this phrase has come to mean "a sudden stroke, action, or attack."

5. While we're on this topic, what does "heavens to murgatroyd" mean?  And who says this anyway?

Our friends at PhraseFinder have a story for this too.  They claim it was first said by Bert Lahr (an actor best known as the Cowardly Lion in the Wizard of Oz movie) in the 1944 film Meet the People. Dick Powell and Lucille Ball star in this WWII-era movie. Ball plays a popular but stuck-up Broadway star who leaves the bright lights to become a welder in a shipyard. Here she meets and falls in love with coworker Powell. This being a wartime musical, the plotline is periodically abandoned for the guest-star turns of the likes of Virginia O'Brien, Bert Lahr, Spike Jones and His City Slickers, Vaughn Monroe, and Mata and Hari.

I tried, but wasn't able to find the script.  So we'll keep looking for that in the background.  But it seems plausible.

It was, as Regular Reader Jon points out, popularized by the 1959 cartoon character Snagglepuss, a pink mountain lion with grand aspirations to be an actor.


6. In the story of David and Goliath, David kills the giant with a single stone from his sling.  Is this really possible?  What kind of a slingshot could do that?

A simple query:  [ David sling ] or [ David slingshot ] leads to a wealth of information about the "traditional sling" (as opposed to the surgical tube version shown in the illustration last week).  A traditional sling is just a length of twine (or leather) with a small pocket into which you can place a stone or small projectile. 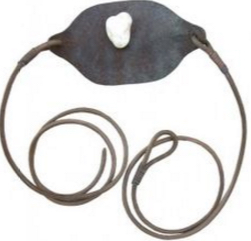 The sling is simple to make and yet much more powerful than you'd think.  When I was in high school I read a very interesting article in Scientific American on "The Sling as a Weapon"(1973).  Being a teen, I made one and proceeded to test it out.  I chose a smooth stone about 1 inch (2 cm) in diameter, whirled it around my head a couple of times and let it fly.  The stone hit the side of our wood-sided garage, and went THROUGH the wall!
Fascinated, I quickly found that I could easily put such a stone through 1/4 inch plywood at 20 paces.  (I quickly stopped testing in my backyard because I realized a missed shot could easily break windows and potentially really hurt someone.) I ended up flinging stone out into the ocean, and got them going fast and far enough that I'd often lose sight of them before they hit the water.
One of the best sources I found is Slinging.org, which has an extensive list of publications about slings and their use.
While there is a great debate about whether or not the stone actually killed Goliath by striking him in the forehead (wasn't he wearing a helmet?),  there's no doubt that sling could seriously injure, and quite possibly kill someone.  As found in Eric Skov's article on slinging, a lead bullet flung by a sling could easily penetrate the skull.

The real lesson here is obvious:
1.  Look up stuff that's interesting / unknown / unclear.  Learn to recognize the small annoyance that you can re-frame as a small research question. In my case, the hassle of getting out and looking for the darn gas cap was annoying enough to make me wonder "Has anyone else had this problem?"  Hence my query above.  And hence all of these queries today.  None of them are difficult, so it really shows how much great content is available, if only you go and look for it!

Teachers:
This should be obvious, but making a sling is NOT something you want your classes to do.  It could very quickly get out of hand!  Literally.
On the other hand, this topic of "looking up things that seem obvious" is a great activity to get students introduced to the idea of doing SearchResearch.
Some rewarding things to do are (a) look up the definitions for words that you're not really certain of; for instance peruse or tangential or affect vs. effect.  You can also do a few other things to check out the commonplace and everyday:  Why are footballs sometimes called "pig skins"? Or how are baseballs really made?