Answer: Where is everybody moving to?

Where is everybody moving to?

(Sorry this took so long to answer.. but... The question is easy to ask, but more complicated to answer than our usual research topics!!


1.  During the past year, what have been the large movements of people across the world?  (We're interested here in people who are moving from one place to another for economic, political, or safety reasons--not people going home temporarily for the New Year's or Thanksgiving Day celebrations.)

A. Find data sources that tell us how many people moved from location X to location Y in 2015?

B. Is there a good way to visualize that data?  (Giant tables of numbers aren't all that descriptive, there must be a better way. Can you find a good one?)

C. How do you know that these numbers are right?  And to what extent can you believe them?  Why?


My thoughts on this:  First, this is a HUGE problem.  (Note to self--don't make such gigantic Challenges in the future! One could spend an unbounded amount of time on this. I also note that I probably should have asked for data from 2014, since some organizations still haven't published their 2015 data yet!)

To answer this in a reasonable amount of time, I'm going to focus on getting the Mexico/US migration data, and extend that to Syria refugees, and then wrap up with a couple of information visualizations.

Mexico/US Migrations:  I live in California, one of the border states with Mexico.  I was born in Los Angeles, and live now in Palo Alto, so the Mexican heritage runs fairly deep.  As you know, migration across the border is a very contentious issue, which means that getting solid data might be a little tricky.

But let's give it a shot.  Clearly, our strategy will have to be to triangulate the data from multiple sources.

I'll start with a query of:

and limit the hits to the past year (using the Search Tool drop-down "Past Year").  By looking through the hits, it's clear that there are two main sources of immigration data--Pew Research and the Census.gov data on immigration.

As is obvious, there's a lot of debate about which data to trust.  Some think tanks find much of the data in dispute (e.g., Austin Institute), and you can find extended debates about how the data is collected (is it accurate?  what time period does it cover?  what's the sampling method?).

But I know that both Pew and the Census.gov people try to do a reasonable job.  So let's look at their data first.

Pew Research: In their article about Mexican migration give the following data:


This chart only covers 1995 to 2014.  (Notice also that the middle bars cover the years 2005 to 2010, while the bars on the right ALSO covers 2009 - 2014... in essence, they overlap by one year.)  Still, you can see a trend beginning of net migration FROM the US to Mexico.  You can read about their census methods in their Methodology article.

In summary, they get data from the Mexican government (National Survey of Demographic Dynamics (Encuesta Nacional de la Dinámica Demográfica—ENADID): 2014) and from the US Census (Current Population Survey (CPS): 2000-2014 March Annual Social and Economic Supplement (ASEC)).  They do a fairly sophisticated analysis to get good estimates of the true number.

In a different article, Pew points out that the net migration (by year) between Mexico and the US is primarily in the direction of Mexico.

The article "More Mexicans Leaving than Coming to the US"  they publish a telling chart (see below).  This chart is based on the same dataset as above (NSDD, ENADID, US Census, etc.).

How does the Census.gov data compare?

and found the Census.gov site for International Programs (which has data for other countries, including migration rates in/out of the US).

Their key chart for this period (and a forecast out to 2025) is this:

Although it's not an exact copy of the Pew data, the trends agree: the net migration pattern is from the US to Mexico, not the other way around.

Exploring this idea of "finding a reliable source," I did a query for:

thinking that DHS (Department of Homeland Security) would have reliable data.  And, unsurprisingly, I found their 2013 Handbook of Immigration Statistics.

This is really a compendium of all kinds of immigration data (including emigration for all kinds of reasons).  But the relevant data are:

"Persons naturalized, by country of origin"

There are many other data tables here as well, including "Non-migrant temporary workers" and others that I'll skip since they're temporary status.

But the other factor is "Aliens apprehended by country of origin"

If you keep looking through this resource, you'll get pretty darn close to the Pew estimate from above (of 870K immigrants during 2013).  (And, FWIW, the historical trends duplicate the Pew findings--they're net towards Mexico!)


I thought of another data source that might be reliable:  The UN.  My query:

led me to a large data-rich report on the total number of migrants from each country in the world.  There I found a data table that reported that (overall) 1.1M Mexicans had emigrated to the US  in 2015 (but didn't report on the number who left the US to go elsewhere).  That's a little higher than the Pew estimate, but "only" by 200,000.

More importantly, this reference, International Migration Report, goes a long way towards answering our other question about large migrations across the world, as there's data for migration from every country.  In the summary page, they write:

In 2015, two thirds (67 per cent) of all international migrants were living in just twenty countries. The largest number of international migrants (47 million) resided in the United States of America, equal to about a fifth (19 per cent) of the world’s total. Germany and the Russian Federation hosted the second and third largest numbers of migrants worldwide (12 million each), followed by Saudi Arabia (10 million)..."

However, there IS a data table for migrants in that were hosted by a country in 2000 and 2015 farther down in the UN report.  This table shows the number of migrants in both years.  The net immigration rate is (roughly) the difference between 2015 and 2000 divided by 15 (for the US, that's around 787K / year, which is in the ballpark with other figures we've seen).

As you might expect, for such a hot topic, there is a wealth of data and visualizations of that data to help understand what's going on.  Of course, each visualization is only as good as its underlying data source.

leads to a host of visualizations.  Here are a couple (based on UN migration data).

From Lucify, showing comet trails of people migrating in Europe (click through to see the real interactive visualization):

And with a query much like the one above, Regular Reader Hans found a large number of infographics and data visualizations collected all on one page.  See The Refugee Crisis through the eyes of Data Visualization.  That's a great collection, here are four that I liked collaged together: 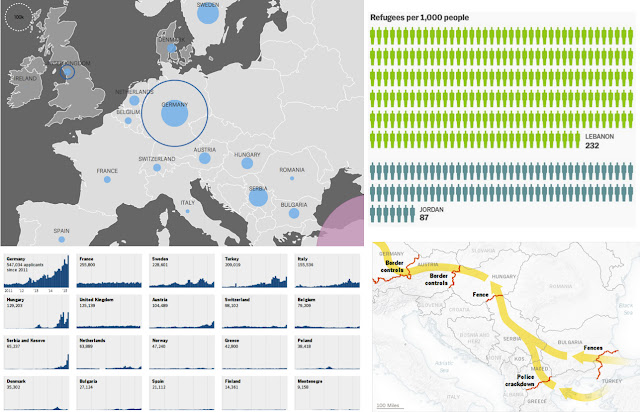 These can go on forever, but I found one that I really liked, both for its visualization properties, and the sense of the way the world migrations are interlocked.  This is the visualization from PeopleMov.in by Carlo Zapponi.  (you really have to click through to get the full experience).   Gratefully he provided information about where he got his data.  The main source of the data is the Bilateral Migration Matrix (the latest version is 2013) from the World Bank site which is a giant spreadsheet showing movement of people from country X to country Y.

A note of interpretation:  As we saw above (but worth repeating here), the data set, and the visualization tool shows the estimate of “migrant stocks” in a given country as of 2010.   (“Migrant stocks” are people who live in a country other than the one they were born in, including refugees. Note that these numbers are NOT the number of people crossing the border each year.)  This matrix of data is what's being viewed here (click on any of these to see them full-size): 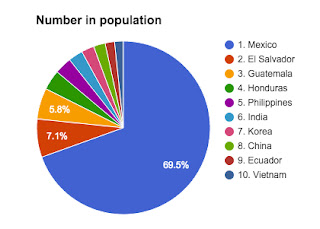 And with a little exploration, you can see there are a huge number of people moving from place to place...constantly.

Answering this question took a LOT more time than I'd anticipated.  It's easy to find data, but finding the RIGHT data is tricky.  This experience led me to a few essential search insights:

1.  Check multiple sources.  In my case, I looked at (and found) data from the UN, the Census Department, the DHS (Dept. Homeland Security), and Pew (which in turn drew from data sources in Mexico).  Luckily, the data were pretty close together, though not in perfect agreement... which is to be expected.

2. The data is there, but you HAVE to read very carefully.  As we saw above, there's a ton of data out there in various repositories--but the metadata describing the data sets always requires a great deal of careful attention to ensure that you've got the right data set, AND that it's actually what you think it is.  (This probably explains why you can read such wildly varying reports of data in the news--it's easy, in the course of fast-paced research, to grab the first numbers that come across your screen.  Especially for these controversial topics, it's essential to have a validation / double-checking step in place.

3.  Visualizations are great... but be sure you understand what the data is from, and how it's transformed.  Again, it's easy to mis-interpret what you see.  And remember this basic axiom:  If they don't report on where the underlying data comes from, you can't trust the infographic!

These kinds of assignments typically require a great deal of fairly sophisticated reading.  As a way of getting students to talk about how/what they found, have different teams presenting their findings (including what queries they used, and what sources the found).  This can be a lively discussion, especially as students start to hear about other kinds of research paths than the one they tried.

An important part of their search strategy will be getting data from particular resources (e.g., UN, UNHCR, DHS, Census, etc.)  They need to learn how to recognize those names as well.  (Think about it this way--a student who doesn't know about the UN won't think to search for that as a reliable data resource.)  So be sure to teach the names of reliable data sources as well.