Answer: Finding out about a technical conference...

There are lots of reasons to know about technical conferences...

... but for SearchResearch, the primary reason is that they often have the latest and greatest content on any given topic.

Let's answer this week's Challenges, and then talk about why this is an important research skill to have.

1.  Conferences typically have papers that are classified as "Best Paper."  What was the title of the Best Paper for this year's Conference on Human Information Interaction and Retrieval?

leads quickly to the conference website: sigir.org/chiir2016/  Looking at the home page you'll find this is first meeting of this conference (which is, interestingly enough, all about SearchResearch-type topics).

However, in searching through the site, you won't find anything that lists "Best Paper" (as of this writing, if you do a search like this:

it won't return anything about the best paper of 2016, only who was on the committee to identify it).

On the other hand, this is exactly the kind of late-breaking news that Twitter is really set up to share.  So... jumping over to Twitter and searching for the obvious hashtag #CHIIR2016 along with a "Best Paper" query rapidly gives you the correct answer: 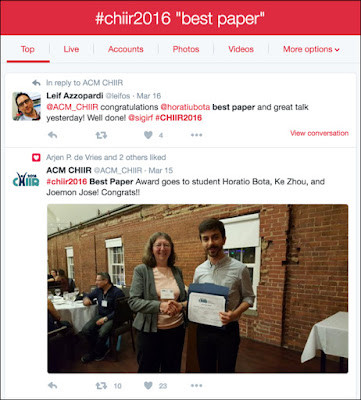 Going back to the CHIIR website, you'll find that their paper is called Playing Your Cards Right: The Effect of Entity Cards on Search Behaviour and Workload by Bota, Zhou, and Jose.


2. Who was opening keynote speaker at CHIIR 2010?  (No, I'm not crazy--I'm asking this for a specific reason that I'll reveal on Monday.)  BTW, why is this special talk called a "keynote" anyway?

As we noticed earlier, this is the FIRST year of CHIIR, so what's up with asking about 2010?

If you look at the home page, you'll learn that the CHIIR conference is a merger of two earlier conferences,  Information Interaction in Context conference (IIiX) and the Human Computer Information Retrieval symposium (HCIR), which have run since 2006 and 2007 respectively.

This also happens a fair bit--conferences are born, merge, split, pass away, and sometimes change their names.  In this case, if you look at both IIiX and HCIR conferences, you'll see that I gave the keynote at HCIR in 2010 on the topic of why searching is sometimes hard.  (It's slightly technical, but if you're reaching SearchResearch, you might enjoy the presentation.)

If you look up the definition of "Keynote" on the Online Etymology Dictionary you'll find:  "also key-note, "lowest note of a musical scale, basis of a tonal key, the tonic," 1776, from key (n.1) in sense of "musical scale" + note (n.).

The keynote is the given note on which the melodic and harmonic relationships in the scale are built, and it gives its name to the key.

However, the original use of keynote in the figurative sense of "leading idea, central principle" is from 1783; keynote address is 1908, American English.
Well, if you look more deeply, not really 1908, in fact.

The Merriam-Webster gives 1914, the Random House (at Dictionary.com) gives 1905-10. But if you look for [ keynote speech,keynote address ] at Google Ngram Viewer, you'll find references from the 19th century.

Most of them are wrongly dated on Google Books (because they match multivolume books dated by their first volume) but these two at least are valid:
1. George Francis Dawson, Life and Services of Gen. John A. Logan: As Soldier and Statesman, 1887, transcribing on p.136 "Logan's 'keynote' speech in the House, 1868—Scathing review of the 'Principles of the Democratic Party'."
2. David Decamp Thompson, Abraham Lincoln: The First American, 1895, mentioning on pp.45- "Lincoln's 'keynote' speech."
Notice how on both these sources "keynote" comes in quotation marks, implying that it was at the time a recent use of the word.
Notice also that Wikipedia is incorrect on their statement "The term key note comes from the practice of a cappella, often barbershop singers, playing a note before singing." The term precedes barbershop singing by several centuries. The link provided as a reference, though, doesn't make this mistake, while explaining very well what a keynote speech is or should be: "I like to think of it as similar to the key note for a cappella singing – its sets the overall tone and context for the event."


3. While the conference papers are great to listen to, a great deal of work happens by walking around.  While walking with a colleague, I found this flower growing just outside the conference meeting place on the side of the road.  What is it?  (And, aside from enjoying flowers, do you have any idea why I might be asking this apparently out-of-place question?) 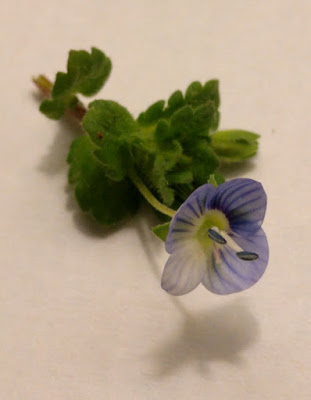 Well... As Hans discovered, I left the image file name as "Speedwell.jpg"  -- I didn't mean to give you that much of a hint!  But that's certainly one way to find the answer...

Another solution was to search for a wildflower identification site, as Regular Reader Casey Brough did, finding wildflowersearch.com, then entering the lat/long for Chapel Hill, NC (35.916088, -79.054398) and filtering on blue (or purple) and scanning down the list to find that this is Veronica persica (aka Persian Speedwell).  Note the distinctive one petal that's smaller than the other three.

And why would I ask this question now?  (No, my daughter isn't named Veronica, and no, I never worked on the Veronica search engine, although those are great ideas suggested by Regular Readers.)

Nope... it just so happens that Sunday (March 20, 2016) was Nowruz (Persian New Year), and I liked the serendipitous connection.  (And, to be honest, I don't know how you'd search for that... you just have to know some stuff about the world.)

4. What is the largest scientific conference that's held somewhere in the world each year (annually)?

Like many of the Regular Readers, I did some version of the search query:

Why did I add in "attendees"?  Because I wanted to find pages that gave the estimated crowd size, and every page I've ever seen always says "... with nn,nnn attendees... yourConferenceHere is the largest conference in the world... "

You have to be a little careful with this because we're talking about bragging rights here--every conference wants to be the biggest, the best, or the most-talked-about.  So you'll see slightly weasley text like "...yourConferenceHere is the largest society in yourTopicHere in the world, and our conference..."

That's probably technically correct (that is, their society is the biggest), but that's NOT the same as the conference size, which can be very different.

So I did several versions of my query (including the word "international" as well) to find a number of "largest" or "biggest" or "most extensive" conferences.  I visited several and found this was the conference sizes:


So, the bigger question for this week is really "how do you find conferences on a given topic?"

and find a bunch on that topic.  Some of them might be more practitioner-oriented than academic, so if you want the latest research in that topic area, try adding "papers" as a context term (because academic conferences want participants to present papers, which will be the latest in research results). 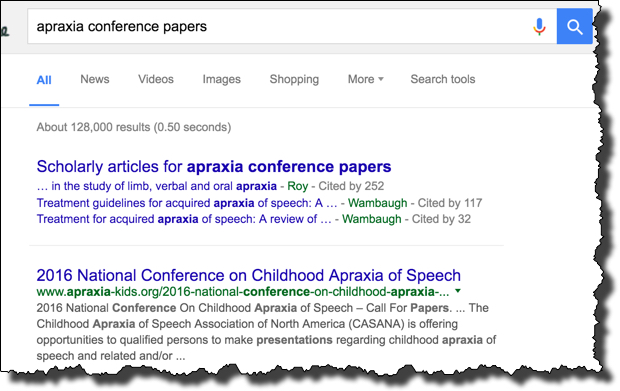 As you can see, there are a set of papers found in Google Scholar that would be worth looking at, not just for the article content, but also for the citations, which will tell you the names of the journals and conferences where they're published!

2.  Remember that conferences will sometimes change names, merge with other conferences, or split into separate conferences.  Usually the conference web page will disclose that information (but not always.. you might have to hunt around for the transition--checking Google Scholar can help here).

3.  Check out the file name!  As Hans found out, sometimes that's a bit of metadata that's just exactly what you need.

4.  There are specialized tools to help find flowers (and bugs, and animals, and...).  You can usually find these by searching for the kind of thing you want to identify, and then identification.

5.  When looking for something that's the biggest / tallest / best... be sure to look for multiple opinions on that.  For superlative properties (like the biggest conference), people will push their opinion... so be careful not to take the first one you find.

I think that teaching your students about the existence of professional academic conferences is a great idea, but then, that's where I primarily publish.

BUT... it can open up your students to a rich, new kind of content that they might not know about.  (I'm willing to bet that most students don't know what an academic conference is like, let alone that there might be one in a topic that they're interested in!  For background on academic conferences, see the Wikipedia entry that gives a short overview.

As a student Challenge, see if they can find conferences on animals and plants they're interested in--for instance, can you find an academic conference on salamanders, or spiders, pollen, or arctic wildflowers?  (Note that they might have to change the search terms to get what they want.  "Wildflowers" might have to become "botany."  Can you teach them how to find the more general term? Here's an SRS blogpost that might be helpful.)