Answer: Pulling together information about the geography of Hawai'i

You'd think these would be simple...

... questions.  But they're not quite as easy as you might think.


Many simple questions have surprising complicated answers.  For instance, "how far is it to the moon?" sounds straightforward, but think about it for a second--draw a diagram if it helps.  Here's what I drew:

The naive interpretation is "the distance from where I'm standing to the nearest part of the moon."  If you're more sophisticated, you might say it's "between the centers" (but determining the center of a planet is tricky too).

Keeping this in mind, let's try to answer the Challenges from this week.

1.  When thinking about the colonization of Hawai'i, I kept reading that these islands are the "most remote" island chain in the world.  That is, they're relatively farther away from any other major population center than anyplace else.  Is that true?

What do we need to clarify here?  As in the Moon-to-Earth example, we need to know where we're measuring from.  Luckily, the Big Island is literally the biggest island in the Hawaiian archipelago, so let's measure from there.

Like many research questions, it very much depends on how carefully you define your terms.  IF the Big Island is your starting point, and population centers that are > 100K people are "major population centers" then the closest such city is.... Honolulu on the Hawaiian island of Oahu (with ~300K people).

(See what I mean?  Definitions are important.)

If you look at Google Earth with the Big Island of Hawai'i in the center, this is what you see: 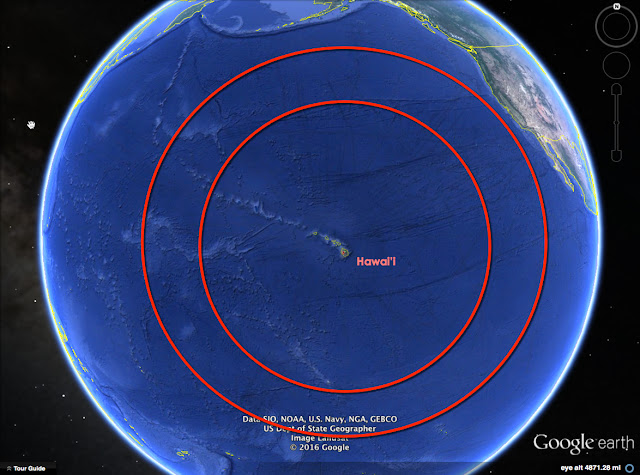 I've added a couple of range circles centered on the Big Island so you can see how far away everything is.  Japan is off over the western horizon, and the west coast of North America (in particular, California) is near that second, larger range ring.

So the question now becomes "Are there any large cities in Oceania?"  I did this query:

which led me to this list of "Largest Cities in Australia and Oceania by Population."  Since the first 15 cities are in Australia (which is farther away from Hawai'i than California), we can ignore those.  All we have to do is to find the distance from Hawai'i to the other cities of more than 100,000 souls.  This quickly tells us that only Dili (East Timor, 234K) Hamilton (New Zealand, 224K), and Noumea (New Caledonia, 179K) are possibilities.

Are there any other places in Oceania that are within the outer range ring and still have large cities??  Fiji is, but a quick search shows the largest city there is Suva, at 88K.

I checked Polynesia, French Tahiti, etc., all by following this query pattern.  Nothing else even comes close.

So let's check on Dili, Hamilton, and Noumea.

As you might recall from an earlier SRS Challenge about Great Circle distances, it's easy to find a tool to give you the direct, Great Circle Route distance from Hawai'i to any other place.  With my query [ great circle distances ] I found the FreeMapTools web page for calculating distances between named locations.

Using this tool, here's what I found for distances between Hawai'i and...

but when I started checking 100K+ population cities in California, I just worked my way up the coast, looking for distances.

The next major population city going north is Portland, Oregon, at 2957 miles.

Now that we've figured out the distance between the Big Island and the closest "major metropolitan area," (which is Santa Maria, California).  Now we need to look for other islands that are also remote.  What would those be?

[ remote islands of the world ]

gave me a list of a couple of interesting remote islands, but just scanning the list shows that only Tristan da Cunha (in the middle of the South Atlantic) even comes close to the remoteness of Hawai'i.

By repeating this process (looking for the nearest land masses and 100K+ cities in those "nearby" locations) we find that the distance from Tristan da Cunha to Rio de Janiero (Brazil) is 2076 miles, and the distance to Cape Town (South Africa) is a mere 1046 miles.  Both cities are closer to Tristan da Cunha than any equivalent city is to Hawai'i.

So... by our definition (distance from the Big Island to a city with more than 100K people living in it), Hawai'i really IS the most-remote island on the planet.

And it's a wonderful place to visit.  Here's proof from the North Shore of Oahu...

2.  This might seem obvious, but maybe it's more subtle than you think:  How many islands ARE in the Hawaiian islands?

The obvious Google query would be this:

[ how many islands are in Hawaii ]

And that would give you this answer...

According to the official Google results, it would appear to be 8 islands.  Note that it says "eight MAIN islands"  (emphasis mine).  Whenever you see something like that, you should be cautious about accepting the answers as-is.  But let's look at Google Earth again.  That's the Big Island down in the lower right, with Maui, Kauai, etc. all lined up nicely. 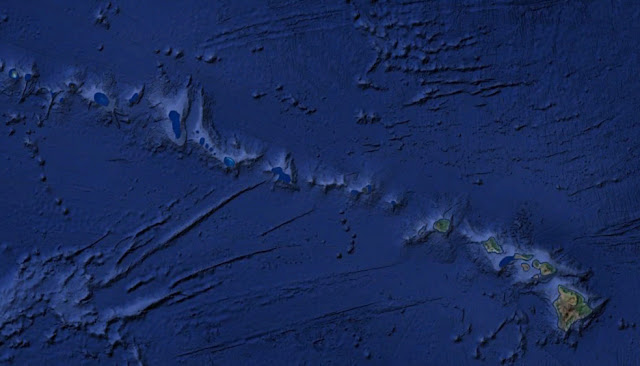 In Google Earth you can turn on the "Borders and Labels" layer and see this.  Note that the borders are drawn in bright yellow. 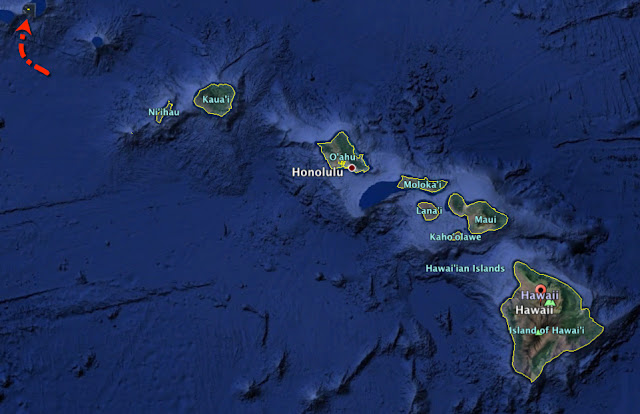 You can see all 8 islands.

But wait a second!  See that little yellow dot in the upper left?  (With the red arrow pointing to it.)  What's that?

Zoom in, and you'll see this:

This is Nioha--a small island that's about 130 miles NW of Kauai.  If you look back at the first image of the Hawaiian archipelago, you can see that there's a long chain of islands heading off that way.  Nioha is roughly in the middle of that long chain.

Here's a map I found at USGS.gov with the query:

As you can see, there are at least 17 islands in Hawai'i.  But the problem of counting islands gets more complicated when you zoom in.  Here's a picture of the French Frigate Shoals (from Google Earth), located in the center of the above map. 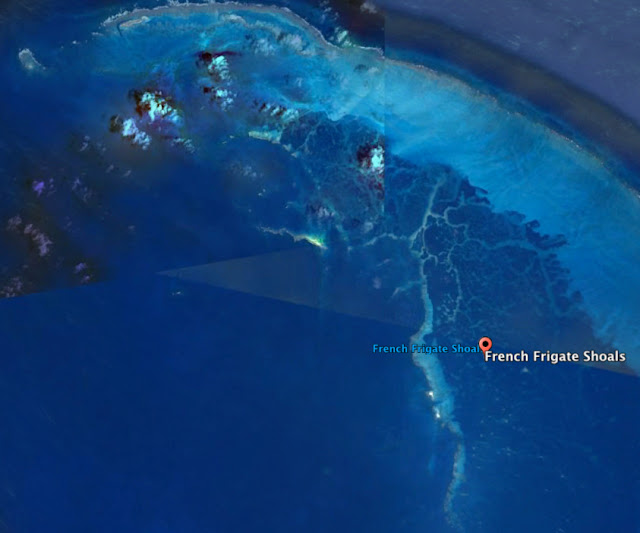 The biggest island in the center is around 0.8 miles long.  There are other, really tiny islands in there as well.  So, when do you stop counting?  Is a 1 square meter rock that's exposed only at low tide REALLY an island?

For our purposes, I'll define an island as any surface that is > 1 acre, and permanently above water.  (And, to simplify things, that's part of the group that's claimed to be in the island chain.)

FWIW, here's Kure Atoll--the last stop going NW in the islands.  Look closely and you'll see tiny Sand Island in there, which sometimes goes under the waves...  (Kure lies close to what is called the Darwin Point, that latitude at which reef growth just equals reef destruction by various physical forces. As it continues to move on the tectonic plate, it eventually will all go underwater.) 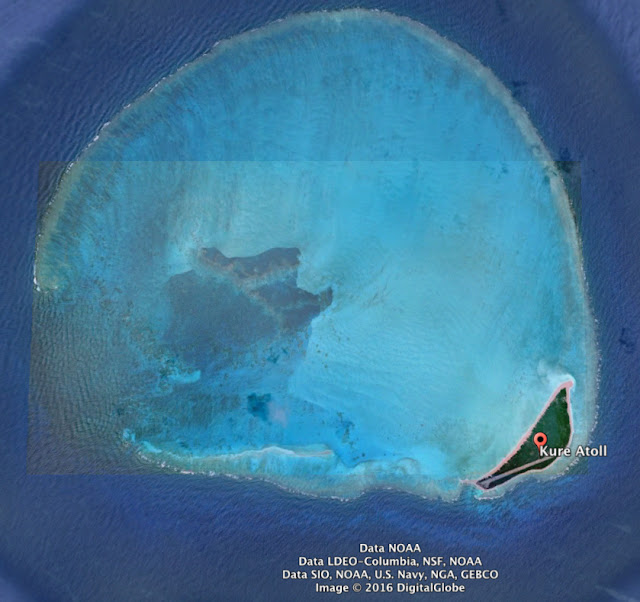 3.  I know the waters around the island are deep--but HOW deep?  What's the deepest place within the Hawaiian archipelago?


By this point you should see the pattern.  What do you mean by "within the Hawaiian archipelago"?

Since the Challenge was fairly imprecise, you have to make your own determination--and then tell us what it is!

I'm going to limit "within" to mean either between the islands, or within 10 miles of the islands.

To begin this search, I knew I wanted to see a map of the ocean floor.  But how do I find that?

I figured there was a special term I needed to know, so I did a search for:

to learn what that term was.  It's bathymetric!

So my next query was:

and that answered my question quickly.  I found a beautiful bathymetric map of the Hawaiian Islands that comes from USGS.gov.  It looks like this: 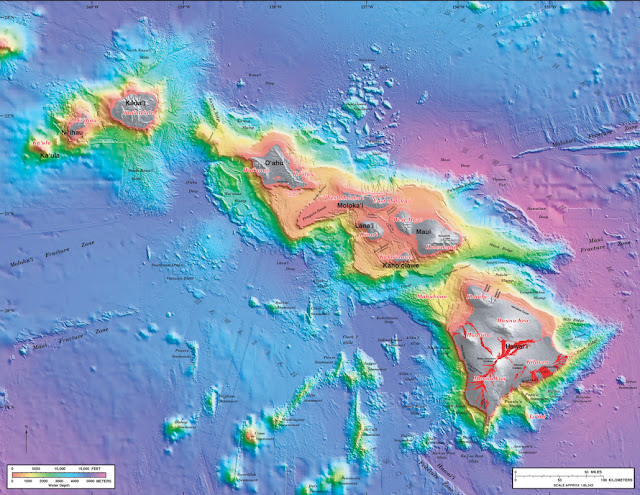 Obviously, there's some seriously deep water (the area tinted in pink) to the east of the islands.  If you zoom in, you'll see these areas are called the "Maui Deep" and the "Hawaiian Deep."

To find the depth of the Maui Deep and Hawaiian Deep, I had to do my query like this:

Why the quotes?  Why the term "bathymetry"?

I had to quote "Maui Deep" because there are lots and lots of web pages with the word Maui not so far from the word deep (usually vacation and tourist sites that promise "... the deep allure of Maui shores...").

And I included bathymetry as a context term (that is, a term you add in order to limit the results to pages that are on this particular topic).

Even so, the web results aren't that great... until I limited my results to just Books.  THEN I found a good number of oceanographic texts (1, 2), all of which say that the Maui Deep and the Hawaiian Deep are both "in excess of 5500 meters."  That's about all they'll say.  Still, that's plenty deep, and as we can see from the map, the deepest parts of the ocean in that area.


The biggest lesson this time is easy:

1.  Be careful of your definitions.  When a Challenge is presented, always question whether or not there might be another interpretation of the question.  What kind of variations could there be in the answer?  As we saw in the case of the Moon-to-Earth question, you literally have to look at the other side of the subject--what's the distance to the far side of the moon.  Keep these questions in mind as you do your research.  When you give your answer, be sure to include what you search for... and what you think of as a legitimate answer (what's "remote"?  what's a "population center"?  what's "in the region"?)

(One more Hawaii Challenge this week, then on to other things!)