As I mentioned last week,

I went back up to the place where I took some of those original pics of the plant-free zone around chaparral bushes.  This place is Black Mountain (37.319795, -122.163153), a mixed oak woodland, chaparral, and grassland.


I had speculated that small bushes couldn't provide enough cover to let small critters live within (and therefore wouldn't have a barren zone around them).

I went up there to check.  Here are a few images from my walk up there...

I went to this brush complex (#1 in the map below; just off the trail), and took the closeup photo pointing my camera in the direction of the arrow (and standing at the tip of the red arrow at 37.318673, -122.157772).  This is around 56 square meters in size, and just about the smallest brush complex I could find with a clear barren zone.

Here's another image, taken just off another giant brush complex not far away.  Look carefully at the image below, you can see this one is large enough to have trees (the dark spots) growing in the center.  (This is brush complex #2 in the map below.)


As you can see, I laid out a tape measure so you can see the width of the barren zone (just over 39" or 1m).  This zone is so wide that it's also used as a deer trail (lots of hoofprints making a clear deer path here).  For some of these barren zones, it seems there's more than just herbivory by small mammals going on, at least at the larger brush complexes. 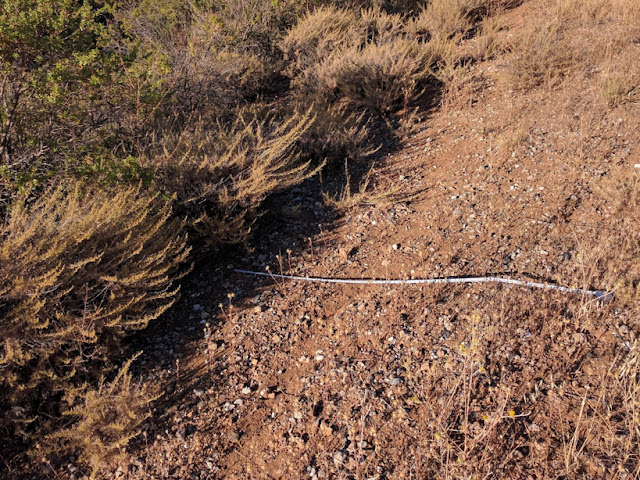 This closeup was taken on the west side of the large brush complex.  Given the mature size of the brush (a mix of coyote brush chamise and even a few small oak trees in the middle), I'm not surprised that this brush complex shelters more than just rabbits and ground squirrels. 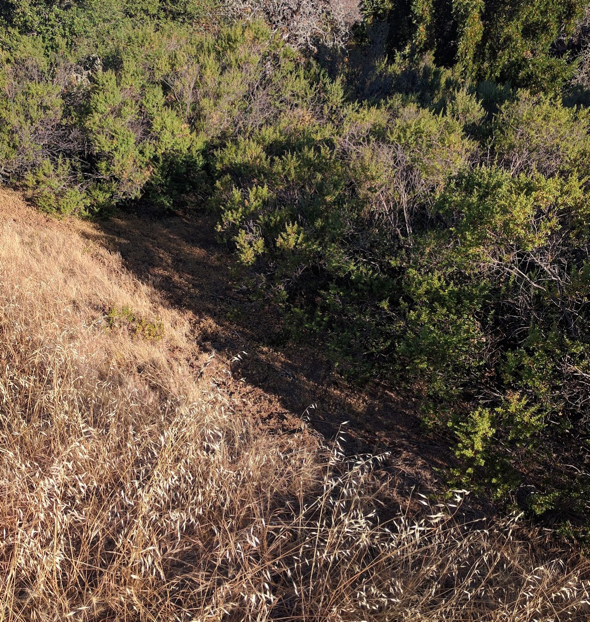 And another, this time, a smaller complex. Brush complex #3, shown below, is around 81 square meters. 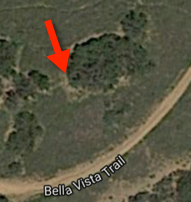 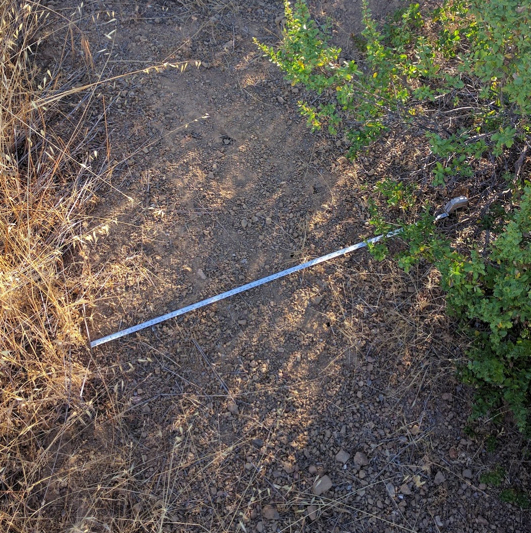 
After looking at a LOT of brush complexes, I noticed that at some point, the brush complex gets too small to even shelter small mammals, and as a consequence, they do NOT have any barren zones.  (See image below.)


Here's an interactive map of the places I took these images.  (You can zoom in/out and click on a brush complex outline to see the area estimation.)


Interactive Map of five Brush Complexes. Click on each to see the size of the complex. (The blue drop pin shows the location of complex #1.)

My wanderings around on Black Mountain aren't really a substitute for a proper field study.  To do proper science, I'd have to do a lot of field measurements and careful tabulation of my findings.

But I have to say that I looked at a LOT of brush complexes up there (probably 100 or so), and in NO case did I find a barren zone around a brush complex that was smaller than 10 square meters.  If the allelopathy hypothesis were correct, then you'd expect to see a tiny barren zone... but not nothing.

On the other hand,  I did notice a few large brush complexes that didn't have a barren zone--but in all cases, they were on fairly steep slopes.  I hadn't anticipated that, but it fits in with the small mammal herbivory effect causing the barren zones.  Squirrels don't seem to mind a slope, but I suspect that rabbits don't want to be grazing downslope of a brush complex if a predator comes along.  Running uphill isn't a great defensive strategy.

The big surprise was that so much of this initial work can be done through satellite photos.  The barren zones (at least of the larger brush complexes) is quite visible on Google Maps or Google Earth.  Of course, you still need to go out into the field and validate, but I'm constantly impressed by how much early phase science can be done remotely.