So.. was it a real plant!
The book I was reading told me this plant existed in Ancient Rome, and was so valuable that it was depicted on ancient coins as an emblem of wealth.
Strangely, It was valuable partly because it was used as both a medicine AND as regular kind of seasoning. It could also be that part of the reason it was so valuable is that it was fairly rare.
Yet, remarkably, this plant somehow vanished--it seems to have totally disappeared from the earth.

What?  It's a plant... wouldn't some enterprising farmer have figured out a way to grow it (and earn millions of denarii in the process)?


We know it was used all around the Mediterranean, and yet somehow, it slipped from our collective horticultural fingers.
Can you solve this 2000 year old cold-case?

1.  What was this plant?  How is it possible that we no longer grow it?

2.  And if you wanted to simulate the flavor of this mystery plant in your food today, what spice would you use?  (Assuming you can find a substitute spice...)

Here's what I did to answer my Challenges...

I started with a query so obvious, I didn't know if it would work.  But--surprise!--it worked really well:

I chose these keywords because I figured any article about this plant would have those three words in it.  (And I can't think of any other article that might!)

Here's the SERP of this query: 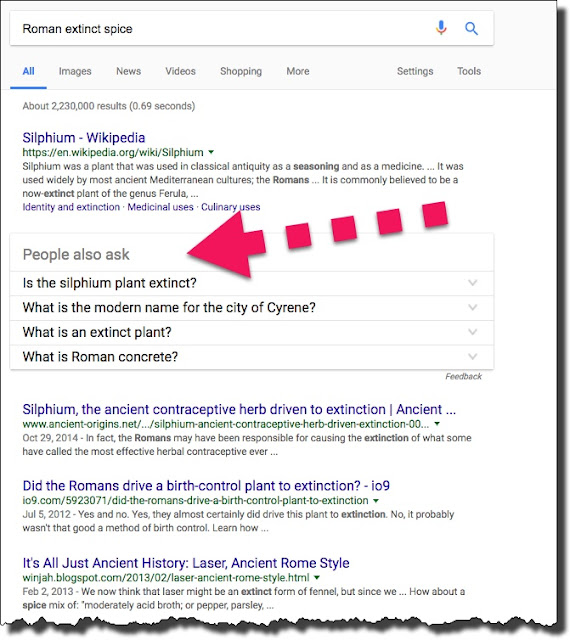 This query seems to have hit the jackpot.  Not only does it suggest that the plant is/was Silphium, but it even has "People also ask" suggestions (note that this feature is currently only available in the US--if someone outside the US would try it with Google.com/NCR and let me know if it works, I'd appreciate it).

These "People also ask" suggestions are questions that lots of people ask that are associated with this query.  Note that the very similar query [ Roman extinct plant ] doesn't generate this "People also ask" list--just the fairly specific [ Romain extinct spice ].

There are a couple of things to notice in the combination of the "questions" and the "related searches."  First, the connection between silphium and extinction seems pretty clear... and that it's a common question people ask.  Second, there seems to be a connection between silphium and contraception.  Third, there seems to be something about "laser" associated with silphium.  I assume that's not the modern "laser," but something else.

There is, of course, a Wikipedia article about the silphium, which begins with a very helpful warning:


This article is about the plant that was used in classical antiquity. For the modern genus of plants, see Silphium (genus). Not to be confused with Silpium.

The Wiki article (and several of the others on the first page) seem to agree:  Silphium WAS a plant from the North African city of Cyrene (in Libya), and was so critical to the Cyrenian economy that most of their coins bore a picture of the plant or its heart-shaped seeds.

The valuable part of the plant was its resin (aka laser, laserpicium, or lasarpicium), collected by cutting the plant, gathering the sap, and drying it out a bit to form a kind of gummy resin.

In the Wiki article there's a link to the book Encylopedia of Birth Control  (2001, by Vern L. Bullough).  In there I found the following:


“One ancient contraceptive might have been so effective that it became extinct.  This is believed to have happened to silphium (a species of giant fennel, Ferula), which was widely used as an oral contraceptive in the Greek world and in the ancient Near East.  Overharvesting caused its price to rise and by the first century of the modern era it was described as worth more than its weight in silver. Part of the difficulty was that it grew only in a thirty-mile band along the dry mountainside facing the Mediterranean sea and attempts to expand its rate of cultivation failed.  By late antiquity it had become extinct.  … Silphium has a widespread reputation as both a contraceptive and an abortifacient.

The standard prescription was for a woman to drink the juice from a small amount of silphium, about the size of a chickpea, with water once a month.  It was also used as a menstrual regulator, a euphemism in many an ancient herbal book for abortifacient.
Other forms of Ferula that are not extinct were also used and have been tested in modern laboratories, but they were not as prized by ancient peoples.  One such form is asafoetida (Ferula assafoetida), which was a common substitute for silphium in the ancient world.  Its root sap is what gives the modern Worcestershire sauce is distinctive aroma.

Crude alcohol extracts of asafoetida and a related plant, Ferula orientalis, have been found to inhibit plantation of fertilized ova in rats, and these plants… seem to have been an effective means of birth control in humans."

If you read through all of the articles, you'll see there's some debate about this.  Did it REALLY work as a contraceptive?

But I was curious about how far back we could trace this plant.  Several of the articles mentioned that Pliny the Elder had written about silphium, so my next query was:

which led me to the Perseus web site, and the relevant section of Pliny the Elder's article about silphium (it's Book 49 of his The Natural History).  Translated from the Latin, Pliny says:


Laser, a juice which distills from silphium, as we have already stated, and reckoned among the most precious gifts presented to us by Nature, is made use of in numerous medicinal preparations. Employed by itself, it warms and revives persons benumbed with cold, and, taken in drink, it alleviates affections of the sinews. It is given to females in wine, and is used with soft wool as a pessary to promote the menstrual discharge...


Of course, he then goes on to say that silphium is also useful for treating corns, removing the venom of snakes and scorpions, pleurisy, and convulsions.  (Alas, Pliny wrote whatever he heard, and seems to have been plenty credulous!)


(Side note: Did he say "laser"?  Yes, the word "laser" used to mean the juice / resin of the silphium plant.  I was curious about this, so I did a search in Google Books for the word "laser" in any book printed before 1900, and found The New Sydenham Society's Lexicon of Medicine and the Allied Sciences (1888) with definitions of laser, laserwort, and laserpicium... all versions of silphium.  There's also a side-note that an inferior version of silphium/laser is asafoetida!)


So why did it become extinct?

As I read through the articles, there are plenty of speculation about why it went extinct, but the common theme in all of the stories is that it was a kind of tragedy of the commons.  Since the plant would only grow along this stretch of the Libyan coast, AND because nobody was able to figure out how to cultivate it (which is true of some spices!), once that stretch of the coast was over-harvested, that was it for the silphium.  Gone.

Of course, there weren't careful natural history reporters back then, so it's difficult to come up with an exact cause of the extinction event, but a search for:

brought me back to Pliny the Elder, who writes (in Book 15 of Natural History):

Next to be described is the laserpicum, which the Greeks call silphium, a plant of outstanding significance that was discovered in the province of Cyrenaica.  Its juice, called laser, is an important source of nourishment and medication, and worth its weight in silver denarii.

But it has not been found in Cyrenaica for many years now because the contractors who rent the fields for pasture, realizing where the greater profis lies, wipe out the silphium by grazing flocks upon it.

A single stock is all that has been found there in my memory, and it was dispatched by Emperor Nero.  If ever a flock does happen upon a sprout of it, they give themselves away after eating it—a sheep by falling asleep on the spot, and a goat by a fit of sneezing.

Again, you have to be cautious about what Pliny writes, but this story sounds plausible.  It was grazed out of existence.

Of course, it's possible there are still some around... but the coast of Libya has become increasingly desertified since Pliny's day, so I'm willing to bet it's really extinct.

So... what's a reasonable substitute these days?

It's hard to know what silphium tasted like.  Members of the Ferula (fennel) family run the gamut from a licorice-like taste to celery.  So perhaps we'll have to go with the asafoetida.  I've got some in my kitchen (it's used today in Indian cooking), and I have to say it doesn't exactly scream 'add me', as it smells like an robustly pungent garlic/leek/onion mind-meld.  Luckily, when cooked, the flavor is more like a combination of these three ingredients, and adds a rich, savory background taste to food. Asafoetida is never used by itself, and is instead added to help pull together the other ingredients in a dish.

Luckily, Asafoetida is readily available; just check the spices at your local supermarket.


1.  You can pick up useful search concepts and terms by looking at the related questions and related searches.  Be sure to pay attention to these, as they'll often give interesting directions for your research to follow.

2.  Sometimes you end up with an unreliable narrator.  Nobody really believes everything that Pliny the Elder wrote (at least not now). But such sources can be useful for understanding what people believed at the time.  And that's frequently what you want when doing historical research.

3. Look for alternative terms.  I had no idea that "laser" was a word before the invention of the modern technology. But in fact, words like "laser" and "laserpicum" have a long and rich history before the 1960s.  Pay attention to these words!  (And use the time-date restriction filter to find books that use them in the appropriate time period.)

4.  When you read multiple and different versions of the same story, be cautious.  It's hard to figure out what really went on 2000 years ago.  Stories tend to diverge and become more varied with time.


That was a fun SRS Challenge!  Thanks for all of your comments.  Excellent work, team!
Search on!