Answer: What's the story... of these ruined buildings?

Hope you enjoyed the drone video...
... as I said, it was a bit of a surprise to discover those old buildings suddenly appearing in my camera's view! 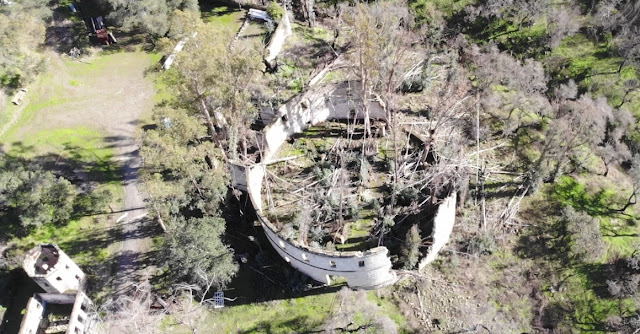 As you can see from the image of the round building just above and the video below (link to the YouTube video), there are quite a few buildings up this remote Napa canyon.  They're just past the stone gates--out of sight from the road, and out of mind of the good people of Napa.

What's the story with these buildings?

In particular, what's the story of that large, round building?

I was impressed with how quickly the SRS Regulars were able to figure this out.

Judith used Image Search, which I admit I didn't try because I didn't think anyone else would have photographed this place.  (How wrong was that?!)

As Kate (and others found), a search for [ Napa valley castle] isn't very productive.  Turns out there are multiple castles (or castle-like objects) in Napa!  So we need something a bit more discriminating.

What worked best for me was a simple descriptive search with a place name, like this:

Looking at Images with this query fairly quickly led me to Napa Soda Springs as a place name.  Then, a search on Google Maps for [ Napa Soda Springs ] gave me this image of the grounds... complete with circular building. 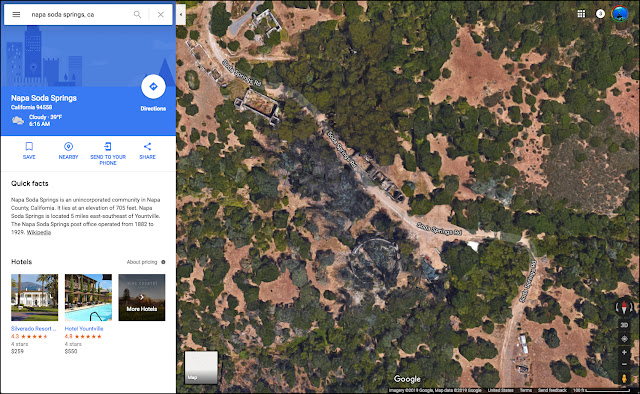 You can see the circular building in the satellite view of the springs, along with the crenellated buildings.  Note also the Wikipedia link to Napa Soda Springs, which tells us that this was ALSO called "Jacksons Napa Soda Springs."

Now that we've located it, what's the story of this place?   In a case like this, where I don't know much, I start with a very open query:

In these queries, the terms ruins and history are context terms.  That is, extra terms that describe the kind of result you're looking for in the search. 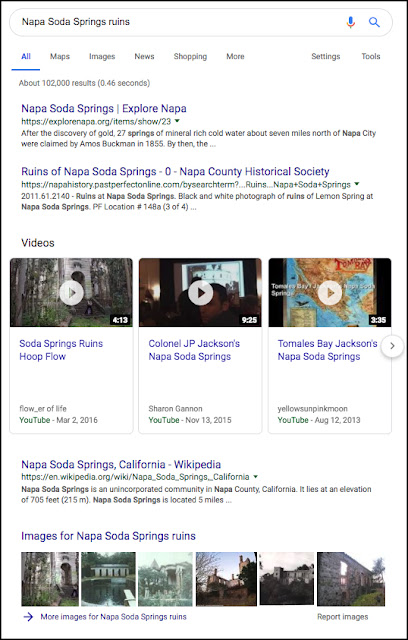 These results are fascinating:  The first hit "Napa Soda Springs" takes you to ExploreNapa.org (a local history and Napa Valley promotion site), with a fairly extensive history.  The whole page about Napa Soda Springs is worth a read, but here's my distillation of what they say:

July 1856, the first resort hotel had opened at the springs, owned by San Francisco lawyer Eugene Sullivan and run by W. Allen

1860, the earliest known ad promoting the water at the spa appeared in the Napa Reporter. The newspaper gave regular updates about the legal battle during 1861.

1861, the newspaper reported that while Buckman was away discussing his case with regional legal authorities, J.H. Wood and companions attacked Mrs. Buckman and workers at the springs, beat them, and destroyed the bottling works. Wood and his associates were each sentenced to a $75 fine or 35 days in jail.

1862, arsonists struck the bottling works operated by Whitney and Wood. Restored to working within a few months.

1874, Jackson had built the place into a health and pleasure resort. Visitors could bowl, play tennis or billiards. They could hunt, fish, ride horses, or stroll among the olive and almond, citrus and apple trees. The grounds were over one hundred acres, with twelve miles of “pleasant walks through the hills and canyons.”

April 21, 1877, the resort introduced the Rotunda, a 75 foot high circular building topped by a glass cupola. There were two stories of outside rooms and a large interior drawing and reading room, lighted from the dome shaped roof by a sixteen foot chandelier.

1881, the resort opened to overnight guests.

1884, many changes and improvements at the springs, including the Tower House, Ivy House, Music Hall, Garden House, clubhouse and pagoda.

1889, The Register reported that Colonel Jackson’s new residence, Bellevue, was almost done, as was the new swimming pool, 150 by 50 feet, situated just below the lawn tennis courts.

September 26, 1900 Colonel Jackson suddenly died, leaving the property to his wife, marking the start of a long, slow decline.

In 1914 the First World War, following shortly by Prohibition in 1919 led to the closing of its doors to guests. Napa Soda (aka “Jackson’s Napa Soda” after John Jackson bought the place) continued to be sold through the Second World War, mostly through its outlet in San Francisco.  The site itself was burned in an arson fire (again!) in the early 1960s.

Looking for a bit more context, I searched for "Napa Soda Springs" in both the Library of Congress Chronicling America (archival newspapers collection) and in Google's Newspaper Archive (available under Google Books--click on the "Newspapers" tab under Tools).  In both cases I found LOTS of articles from the 1860s onward.

In 1888, Napa Soda Springs was still mentioned among the "leading resorts of California" in the Boston Evening Transcript (Oct 8, 1888).

I noticed that doing a search for "Napa Soda Springs" gives lots of results up to about 1890.  After that search for "Jackson's Napa Soda" gives more results.

Including this excellent photo of the Rotunda:


While we're at it, what other resources can we find?

Checking Google Images for [ Napa Soda Springs ruins ] leads to a great assortment of images, both ruined, and when it was in full flower... 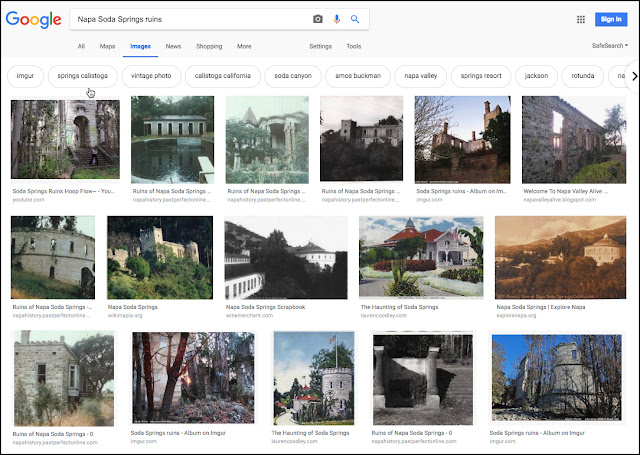 From this SERP, you can see the interior of the Rotunda as it was:


Including a nice exterior shot that was captured as a colorized postcard: 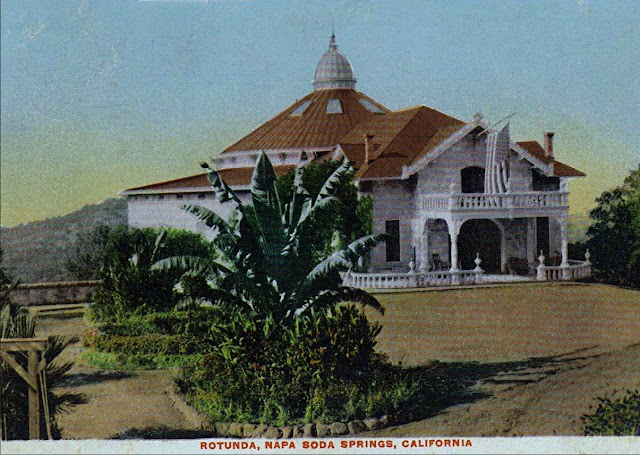 And, interestingly enough, a YouTube video that shows a hoop dancer moving around through the ruins as they are today.  (I really hadn't expected that.)


From that video we can grab a frame that shows the Rotunda as it is now, albeit with a hoop dancer in front. 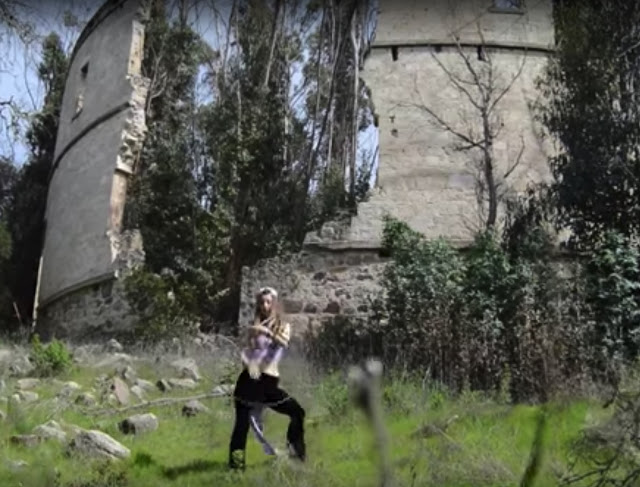 Perhaps the most surprising find (for me) was when I was glancing through the collected Napa Soda Springs images and finding Napa Soda Springs bottles for sale!  That made me think of searching on eBay for "Napa Soda."  I was really somewhat flabbergasted by what I found... page after page of artifacts from the glory era of Napa Soda Springs--photos, postcards, bottles, crates, and ice picks!

I could go on and on with the fascinating story of Napa Soda Springs.  There are lots of images and stories out there, but here's the one I like best, showing an overview of the resort in its prime.

And there are stories, such as the time President Benjamin Harrison stayed at the resort which was then owned / operated by John Jackson.  Sure, Napa Soda Springs was famous, but enough to attract a sitting president?

You have to know that John Jackson worked in the law offices of former Congressman Bellamy Storer.. along with the future President Benjamin Harrison.  Forty years later, Harrison would come to visit his longtime friend Jackson at his stylish resort in the hills above the Napa Valley, luxuriating the spring waters.

The Napa springs were discovered in 1855, then developed into a fairly famous resort that had extensive grounds and buildings. There were music rooms, a dance floor, a pagoda, spring houses, and buildings including the fabulous Rotunda, 75 feet high with a glass cupola at the top. It was the quintessence of a Victorian-era resort.

In the early 1900s it fell into decline, and is now mostly just moody and remote abandoned buildings.  The magic isn't gone, but very different than what it once was.

It all ended when Napa Soda Company gave up in Napa and moved to San Francisco.  (This notice is from the 1920 edition of The Stirring Rod, Volume 7, 1920.) 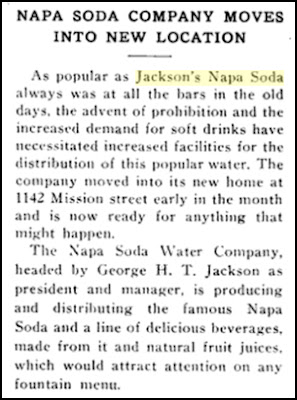 
1.  Even simple descriptions can work well. Much to my surprise, the obvious queries describing what you could see in the drone video actually led to useful results!  Simple is good.

2.  Start with an open-ended query and see what you can learn.  You should dive into the topic ONLY after you've done a broad survey.  (I spent a lot of time looking at articles about the place before zeroing in on specific topics.)

3.  Use multiple resources.  In this case, both a Map of the area was useful (for the place name "Soda Springs") and the Newspaper archives to give a historical context to the site.

4.  When searching for history, consider using Books as a resource.  I didn't go into much detail here, but there are a LOT of mentions of Napa Soda Springs in various books, including a great report from the California Mining Department that talk about the water from the springs as “… series of chalybeate [i.e., containing iron salts] springs…with “Lemon” at 66F (flow, 1 gallon in 5 minutes); “Old Bottling House” spring, 67F (1 flow gallon in 2 minutes)… and “Pagoda” spring at 66F.  The last two have considerable excess gas (CO2).”

5. Consider other sources than plain Google when dealing with a manufacturer.  I was surprised to find Napa Soda bottles for sale on eBay.  I spotted them first on the Images SERP, but when I started searching, I found hundreds of artifacts and articles (and endless postcards), some with intriguing notes from family members visiting Napa Soda Springs in its heyday.

Hope you enjoyed this romp into history.