Answer: What are paintings of things that are NOT the things they depict?

I've seen paintings like this ever since I took Art History as an undergraduate.  You know what they are--paintings of things that are NOT the things they depict.  As you can see in the examples below, the skulls are made of cats or flowers, and the portraits are made-up of fruits, flowers, and vegetables. 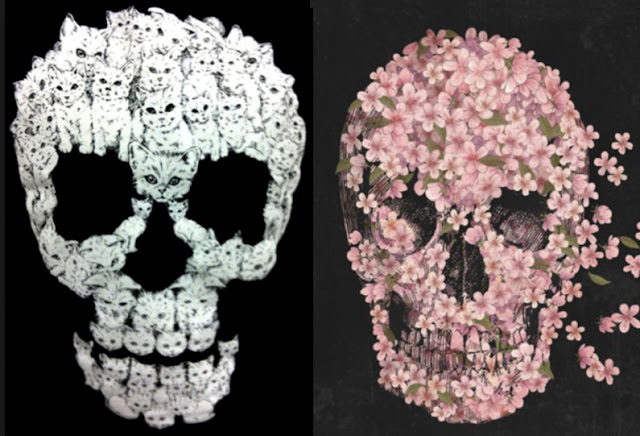 The Research Question for this week is this:

What are these kind of paintings called?  (As you know, if you have a specific term for something, it's a lot simpler to search for information.)  Is there a specific term?

In the spirit of our recent direction on getting "the rest of the story," can you figure out WHY these paintings became popular?  Or can you find artists who are famous for making these "paintings of not-the-thing"?

When I first saw these paintings, I did the obvious query:

[ paintings of faces made with fruit ]

which quickly led to the Renaissance painter Giuseppe Arcimbolo.  Mashable article by Alex Q. Arbuckle which has several beautiful high-resolution images, including a few that are NOT made of fruit or veggies, but which feature other objects (including this amazing portrait that's made up out of many kinds of sea creatures).  This is "Water," (1566) one of a set of four portraits depicting the four different elements.  This is made up of fish and other things from the sea in a wild composition that is much like his more wild images. 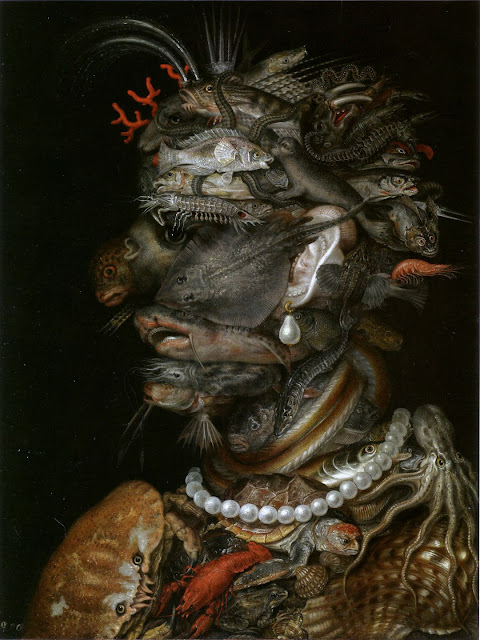 While this is a gorgeous article (be sure to click on the Mashable link above and see the images in full-screen), I naturally wanted some other information on Arcimbolo to triangulate and corroborate what I found (and maybe, along the way, pick up what this kind of artwork might be called).

So, we've found a particular artist who makes this kind of painting. (And what paintings they are!)

But our deeper question is "what is this kind of art called?"

As you know, if you have a specific term for something, it's often a LOT easier to find more-of-this-kind.

In earlier SRS posts we learned that specific biological terms (e.g., Sequoia sempervirens) is what you want for very focus searching.  So, I was hoping to find an art history term (along the lines of cubist, surrealism, or Pre-Raphaelite).

But I think I failed.  SRS Reader Arthur Weiss found the term Arcimboldoesque as a kind of descriptor, and that's not bad.  Here's what that search looks like: 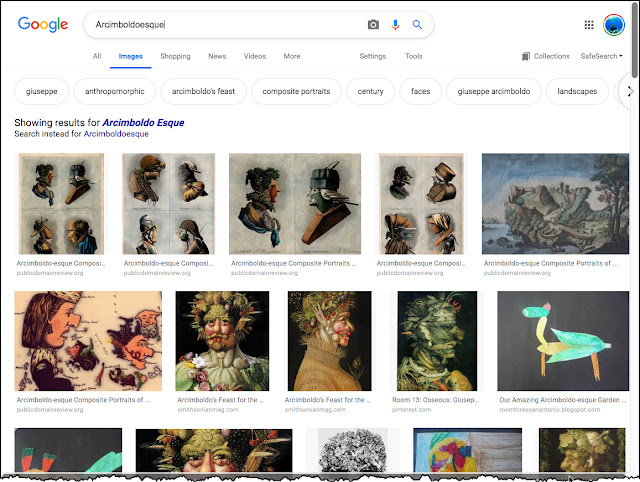 But I was hoping for something more generic that would describe ALL paintings made in this style.

I found that when I did a simple search in Images for [ Arcimboldo ] and found this: 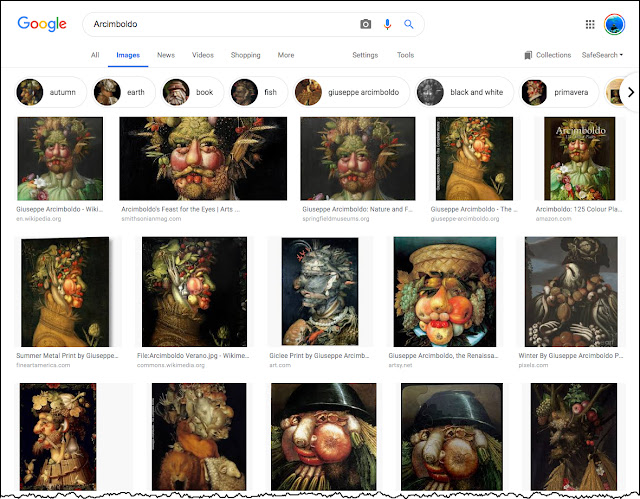 This has a lot of suggestions at the top (and many more interesting images below that are done in Arcimboldo's style).  But none of those suggestions are leading to a specific term.

Arthur's suggestion led me to try a more specific search for Google Images in his style with: 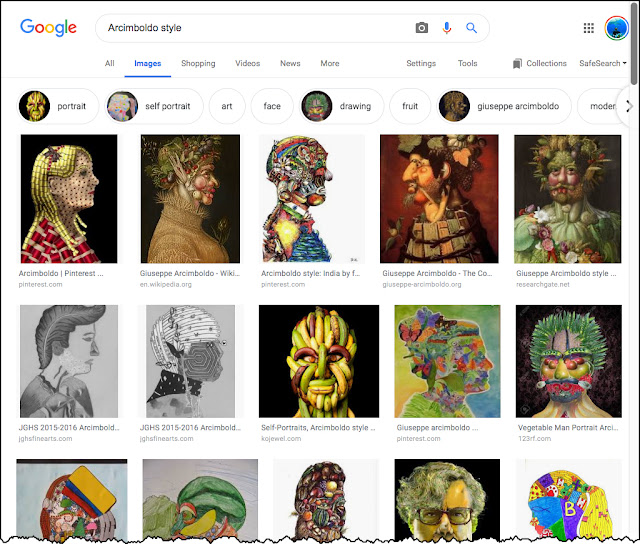 This works surprisingly well find art-in-the-style of Arcimboldo, but it doesn't get us to a specific term.

And that's maybe just the way it is: Maybe there ISN'T a term for "paintings made of composites of fruit or veggies."  I suspect that Arcimboldo defines this space much as Rembrandtesque defines a particular style of Dutch Master painting.

Riffing off Arthur's idea I took this one step farther and went to the OneLook Reverse Dictionary (by doing the query [ reverse dictionary ]).  Then I did a * search like this to see all of the words in English that end in -esque.  (I note that you cannot do this in Google.)  Here I've put arrows to all of the words that are adjectives describing particular painters (Rubens, Dali, Michelangelo, etc.). 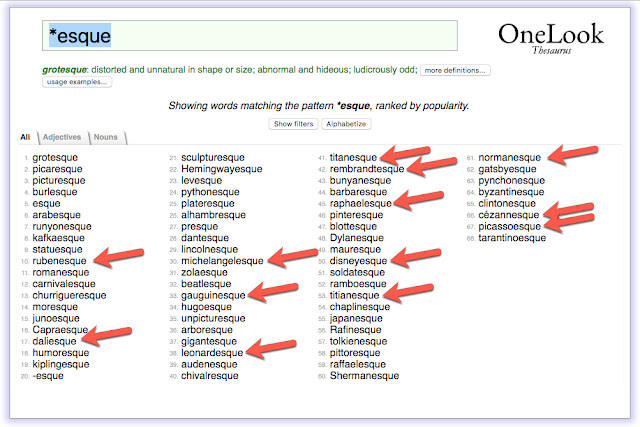 Alas, Arcimboldo isn't among them as an "official" term, but it clearly works as an informal construction.

But we found that a decent answer to our Challenge is "...they're Arcimboldoesque paintings!"


1.  Not everything that you want to exist actually exists!  I really want a specific term for this kind of artwork, but it's not a thing.  Luckily, people seem to create new words ("Arcimboldoesque") as needed.  That's a good thing, as it lets us find things that are otherwise hidden.

2. There are tools to help with partial-word matches!  There are several tools that exist for doing partial-word matches (such as the one I did above with the * on One Look).  If you work with words much (and you do!), it's worth learning more about these tools so you can use them in your advanced searching.

P.S.  Sorry about the long delay this week.  I was traveling, which normally doesn't slow me down... but my laptop BROKE on day 2 of my weeklong trip, and I was without any way to write the blog!  Drat.  First time that's happened.  Look for a new Challenge tomorrow.